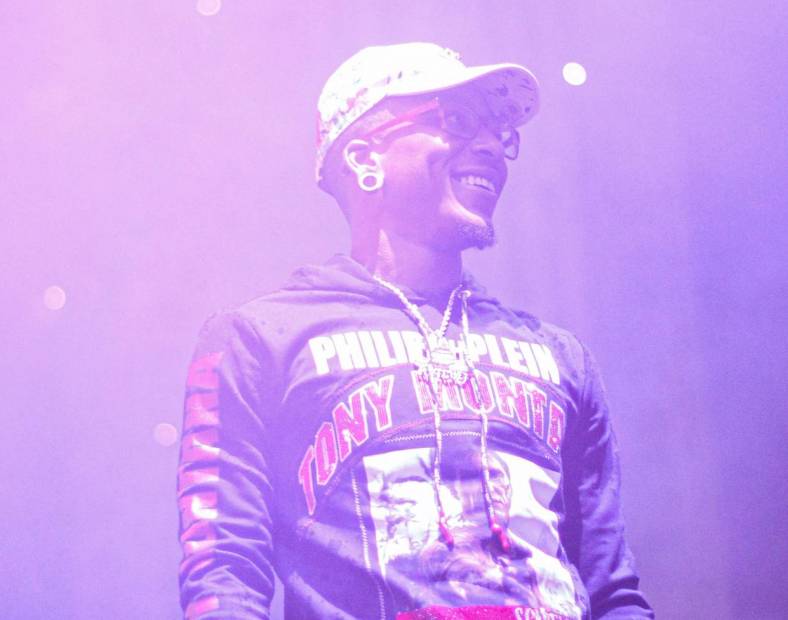 AzChike looks like a rockstar. Walking into Culver City’s Undergrind Café, his shimmering Rich & Ratchet chain instantly jumps out, outshined only by the diamond-encrusted gauges on both of his ears. Of course, his affinity for the party is well documented, and his music is the soundtrack to that party. Add in the fact that he’s been taking the experience across the country all year, with multiple tour runs next to artists like Shoreline Mafia and 1TakeJay, and you start to get a sense of why he categorizes his music the way that he does. “We’re bringing a different genre within the L.A. scene, between gangsta and ratchet,” he said. “The rockstar half.”

AzChike was born in South Central, but he’s lived in Compton, Long Beach, Palmdale, and even Virginia for a brief period. In 2013, he began pressing his mother for a desktop Mac and soon set his eyes on becoming the next big “conscious rapper” to come out of Los Angeles. He compares his early experiences in the industry to a chicken running around with his head cut off, going into bad situations with a lack of expectations.

“I fucked up a lot,” he said. “I watched other people fuck up a lot. I would pay to open at some bullshit show and perform songs that weren’t even out. So nobody would even know them.”

But that was then; before “Burn Rubber Again” found viral success with its unmistakable sample of Too $hort’s Bay Area classic, before major labels and million-dollar companies came calling soon after. The skeletal, skull-shaking music he’s making now is far removed from the conscious efforts of years past, thoughtful bars about the state of the community replaced by bone-chilling barbs that are equal parts menacing and playful. He’s still early in his career, of course, and as we talk he hints of tackling more complex sounds and topics as he continues his ascent. “It’s my first real project, I don’t want to get too deep too early. Give me room to grow,” he emphasized.

For now, AzChike just wants to have fun with it. That leaves us with Rich & Ratchet, a glossy snapshot into the life of a rapper fresh off a deal with Atlantic Records through R Baron and The Machine Works. The cover art features a blood-red AzChike brandishing his chain during a performance at the Roxy and oozes with the same rockstar energy that permeates the album from the first hi-hat to the final bass hit.

The album is a 14-track exercise in shit-talking, that leaves its cozy, West Coast-centric tempo only one time — that’s on “Bussin,” where Shoreline Mafia’s Rob Vicious joins him to boast his lifestyle and intimidate all challengers. On this song and throughout the album, AzChike sits upon a braggadocious throne, proclaiming his greatness and casting down insults with sneering yet unconcerned venom.

In February, an early snippet of “Mmmhhmmm” made waves on social media with its infectious hook, and the final version has performed unsurprisingly well on the album. “I made that song in February at [AzSwaye]’s session,” he said about its creation. “A month or two before that I had gotten signed, I was going in. If I didn’t have a session, I was going to the homie’s session, I was just invading them.”

As often as he’s had to relocate within Los Angeles, his comradery with the rest of his peers should come as little surprise. A watershed moment arrives at the conclusion of the tracklist when AzChike brings out the city on the aptly titled “Every Nigga.” Here, several smaller cliques come together — Mackk&Co, the 1TakeBoyz, and Chike’s own AzCult are well represented — for the sonic equivalent of a class photo of the LAnd in 2019. “We were all crammed up in the booth, taking shots, smoking, breathing on each other,” he said. “I’m arguing with Rucci, like ‘spit your four bars and let me go after you.’”

If it’s not L.A.’s most significant posse cut since “Vice City,” it’s certainly among the contenders. Aggressive, menacing bars play a major role, of course, but it’s the prospect of where each vocalist could be in the next five years that makes it so compelling.

“Seeing everyone shine right now is top 3 motivations,” AzChike said. “We definitely need to see us get bigger than where we are now, but it’s dope as hell right now. It keeps you on your shit too, you wake up and see some amazing shit happen to the next rapper. You’re like, ‘damn, I need something to happen for me too.’”

AzChike’s sound is all his own, but he credits some of the people in that jam-packed booth for showing him how to take it across the country. He has plenty of personality in real life — “when I want to,” he’s quick to qualify — but admits he had to work on engaging the crowds at his concerts. He cites 2019’s OTX Tour with Shoreline Mafia as the moment where his concert performance leveled up, even falling off stage in Seattle while sporting an oversized bunny rabbit mask on his head.

“You can’t be stale on stage, I’m already a stale ass nigga in real life,” he said. “I’ll sit in the corner and not talk all day. But it was about learning how to move on stage, it’s supposed to be entertainment. [Rucci and 1TakeJay] gave me the idea, and Shoreline gave me the platform.”

After years of grinding, each of those names has now been blessed with significant industry backing. Rucci secured his deal with EMPIRE earlier this year, while Shoreline Mafia, 1TakeJay, and AzChike aligned with Atlantic Records. For Chike, that shift in structure not only motivated him to elevate his art, but the way he presents it to the world.

He says he felt more internal pressure in 2018 when he released My World, his first full-length project, as he lacked a clear direction of where he wanted to go with his music. Now having solidified his sound, creating Rich & Ratchet was as fun to make as it is to listen to, but having a major label attached to his name meant an added focus on the branding aspects.

“We’re fucking with multi-million dollar companies, but we have our own shit too,” he said. “Rucci may be with EMPIRE, but he has Mackk&Co. I may be with Atlantic, but I got AzCult. We still need to make sure we’re making ourselves look better than we’re making them look with the deal.”

Within Los Angeles, he’s certainly done just that. Both Chike and AzSwaye have kept the AzCult in the spotlight all year, relentlessly dropping singles and videos while popping up on stages throughout the city and beyond.

In the eyes of AzChike, the real challenge was distinguishing himself in a city with more aspiring rappers than there are places to house them. Now that he’s secured his place in the upper echelon of L.A.’s underground, he’s confident the wave will carry him over to the national profile he truly seeks.

“Honestly, L.A. is harder than the national scale,” he said. “It depends, but I feel like you can make so much noise in L.A. and the West Coast, that it can take you national.”