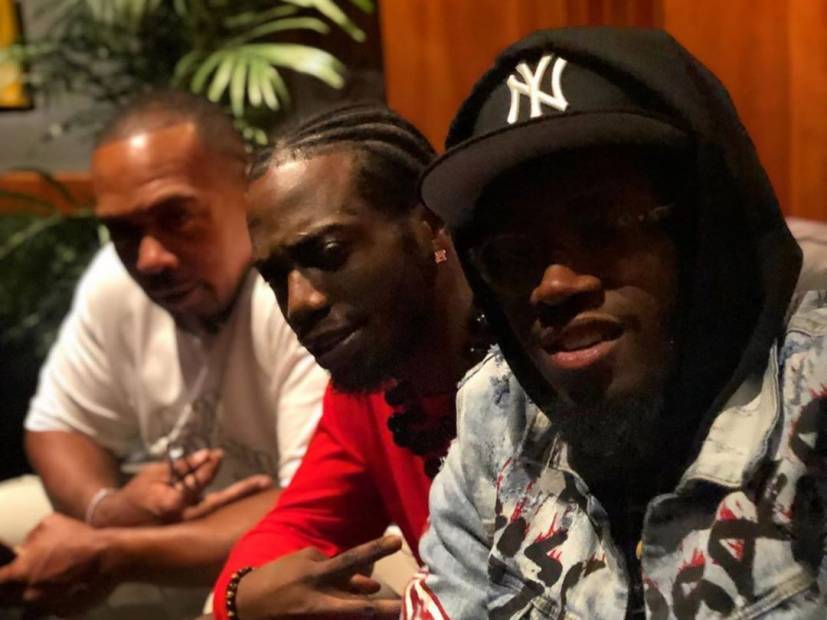 Charlotte, NC – The sheer power of the internet has forever changed the discourse of Hip Hop and most likely, forever that will be the case.

On July 17, the melody maker was servicing his social media fanbase with a new edition of #VanVibes, a series that features Trizzy parked in a car while making beats on an MPC — when the unthinkable happened.

The beat was so riveting that followers and fans demanded that Meek Mill hop on the still-building track.

And the new owner of Lids responded in a supremely excited fashion.

Come to the kitchen and let’s cook … you got more of this type 🔥🔥🔥? https://t.co/dtoCgTZROQ

Ima make some fiya from scrolling on twitter 🔥🔥 watch lol

I am fucking this beat uppppppppp 🔥🔥🔥🔥

HipHopDX managed to catch up with the up-and-coming producer to talk about his influences and what it’s like to now be on the go.

HipHopDX: Let’s get straight to it. What were the first 24 hours like after Meek Mill got wind of everyone hitting him on Twitter?

Tr!zzy Track: Aw man, the first 24 was, It was crazy man. You know, I’m still trying to process the whole thought of this happening, you know what I mean? But at the same time I’m happy and I’m grateful for the opportunity that was bestowed upon me.

HipHopDX: I definitely can tell you’ve been steadily building the IG fan base for some time now.

Tr!zzy Track: Oh yeah man, long time man, it’s been over 15 years total. From the time, from Fruity Loops 4 all the way up to, you know what I’m saying, working on MPC, you know what I mean? It’s a journey, man. I love it.

Tr!zzy Track: I mean, you know, to be honest with you, that particular video had already went viral like on Facebook some odd months ago, you know? It did like, I think now it’s probably like for each four mil. plus.

But it actually caught traction on Facebook first. For the people that don’t know.

Tr!zzy Track: The thing about with me, when I create music like on the fly, you know I like to dib and dab through samples and stuff like that just to get inspiration, but I was listening to a Spotify playlist and that particular song came on while I was driving – because you know I was doing like the cargo van delivery all over the U.S. – and I was heading to Tennessee for a drop-off and I’m just listening to soul samples and stuff like that on the Spotify playlist and that particular song had came on. The thing about it is I remember listening to the song a while back – it’s always been stuck in my head, but when it actually came on the Spotify playlist I was just stuck on it. You know, I was like let me pull over and get to work. It didn’t happen like that.

HipHopDX: That’s amazing. You know you talked about Fruity Loop days and everything – how long have you been doing this officially? How long do you think you been – you really considered yourself a pillar of like, making Hip Hop music? How long you think you’ve been doing it?

Tr!zzy Track: Oh man, like well over ten years, definitely, well over ten years. I started actually trying to make beats and stuff around 2003-2004-ish, something of that nature. Of course, starting out on Fruity Loops – I wish I could find my disc of all the old beats from when I first started. [Laughs]

Because when you listen to stuff, like older things, it’s real nostalgic. It kinda brings you back to a place where you hear this particular beat and as soon as you hear it, I knew I was there at this particular point in time and place in my life. Just listening to it, it just brings back memories and that’s the dope thing about it. All the music you create.

HipHopDX: Have you had any placements beforehand? Have you ever like appeared on any albums?

Tr!zzy Track: Oh, no I have zero placements right now. I’m just focusing on just putting out content, being persistent. That’s just what I’ve been doing the whole time. Just focusing on the craft, bettering myself, and just getting advice from fellow producers and stuff like that, that offer me something that I haven’t.

HipHopDX: Have you got any game from any of the OG legends on the producer’s side?

Tr!zzy Track: Aww yeah man, Timbaland, gotta shout out Timbaland – we had a short conversation, but he’s rocking with me the long way, definitely. Also BeatsbyJBlack, shout out to him. That’s like my brother brother, man. This whole thing, traveling to communities. Shout out to him as well.

He just started a Finger Drum Academy for people that are interested and want to be motivated and inspired to do the whole finger drumming thing. It’s a real good look – a real good outlet to join and learn about the whole thing of how it works.

HipHopDX: Now that’s dope. That’s really dope. All right so, tell me about linking up with Meek Mill. Did he DM you on Instagram? Did he – were you already in Philly, both of y’all in Philly and met up? What was that whirlwind like?

Tr!zzy Track: Oh yeah. No, we haven’t actually met face to face yet. We just pretty much been – soon as the video went viral and stuff like that and retweeted, commented on, tweeted and stuff like that. I had got an inbox on Twitter. I was like pretty much just telling him time to work, he told me send him some stuff and go from there. I pretty much got whatever he wanna rock with it’s gonna get back to me but you know, we working.

HipHopDX: I have to agree with everybody that that powerful sound definitely screamed Meek all day. Are you from Philly originally?

HipHopDX: Gotcha. So how ’bout them Carolinas? Y’all doing it big.

HipHopDX: There were reports that Meek hopped on the viral beat that you did, the band beat. Have you heard anything on it?

Tr!zzy Track: Nothing else so far, just pretty much the snippet of what everybody had heard already. But that’s pretty much it on that end. In due time, I’ll get that whole version. Get to peep it out.

And I trust the process, know what I mean?

HipHopDX: There’s no way you can get robbed because everybody knows about it!

HipHopDX: I said most MPC users, you know you guys are always bound to get compared to Just Blaze. I think it’s inevitable – he just put so much music out there with that sound, would you say he’s a direct influence for you?

Which makes perfect sense. And then for Meek to actually be on it after all this, to the talk from before all this blew up. It’s just amazing.

Pullup if u in da area! Aug 1st. More info on da flyer! @theboweryelectric we goin in!! S/o to @slippyninja for the dope azz artwork once again! #practice #mpcgang #fingerdrumming #fingerdrummer

HipHopDX: I see you putting in work for all your newfound Instagram followers. You just announced a show, in New York City of all places.

Tr!zzy Track: Oh yeah! Bowery Electric, August 1. Be sure to pull up. I’ll be there live in effect, doing the show in New York, so pull up! Pull up August the first!

HipHopDX: What can the people expect? Are you going to be making beats live on stage?

Tr!zzy Track: Oh yeah, yeah, I’m gonna be live on stage. This is the thing – what some people probably don’t know either is that I don’t just do finger drums, I’m a DJ as well. I DJ, so I incorporate both of those aspects. It will be very interesting. Just come out, going live baby! We going live! Also on that note, don’t forget, Tr!zzy#practice is the name of my instrumental album. Thirty-five tracks of just fire, crazy fire. If you don’t know about that you need to know about it now.

Go get that from all streaming platforms: Spotify, Amazon, Tidal, Google Play, everything you can think of that’s streaming right now just go type that in.

August 1 at the Bowery Electric in New York City. Pull up!