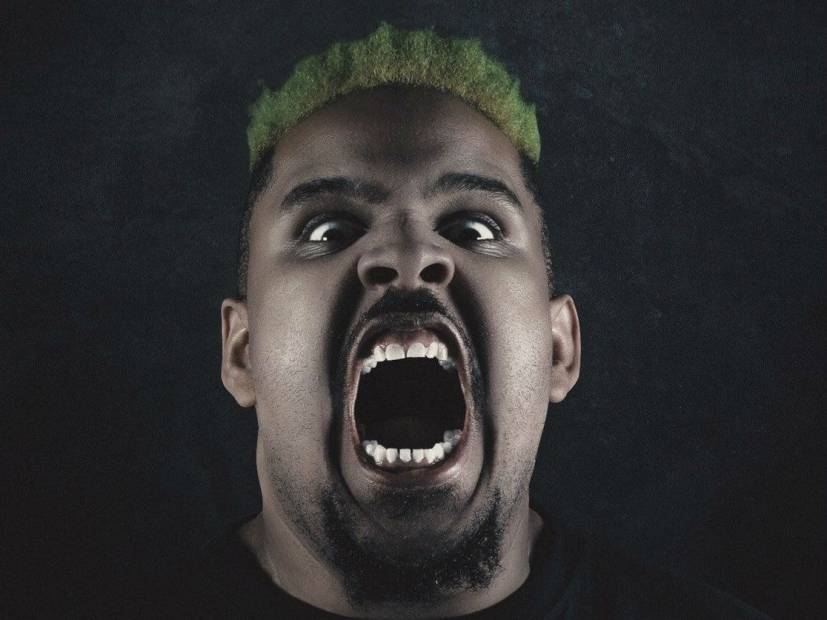 One can’t witness a Beatking set without him shoving a cucumber or eggplant down a woman’s throat as he performs fan favorites including “Scream” and “BDA.” Besides his NSFW shenanigans, the Houston rapper/producer has been consistently releasing music for nearly a decade through his Club God and Gangsta Stripper Music series alongside collaborative Underground Cassette Tape Music projects with Gangsta Boo. Around that time, he created “freestyles” based on meme-able topics similar to another Holiday season favorite.

Speaking with HipHopDX, Beatking explains how a disappointing tour led him to get creative with vegetables, issues with Travis Scott over Astroworld, the ultimate goal of working with Juicy J and more.

HipHopDX: As social media gave thoughts about the #CucumberChallenge, many of your fans were vocal about you setting the trend. Can you recall the moment you decided to actually make that a thing?

Beatking: It’s a long story so I’m going to make it short as possible. I went on this tour in 2017 and it was the worst time ever for me. The guy I went on tour with — who was supposed to be promoting it — didn’t promote the shows right. He was sabotaging my brand. A lot of shows he ended up canceling. He had to give the fans their money back due to ticket issues. It was all a big mess. It had me really down, messed up and discouraged. I kept asking myself how do I get out of this feeling? I was like alright, I gotta get a song to bounce back. I had dropped a new song called “Scream” and everybody liked it. Then I was like I gotta shoot a video for it. What can I do to get everybody watching it? I thought I could top “Tip Drill” by having chicks sucking on cucumbers and eggplants. I’ma put Uno cards on they tities. I was just living my life. At the end of the night, I had 60,000 views from the behind-the-scenes of the video on my Snapchat. I guess it even made Pornhub too. It’s crazy. It went viral up to the Midwest, Gulf-Coast. How could I bring the video to my fans? Then I was like I got it, I’ll get the vegetables from the video to the fans. The first night I did it, it went viral. 50 Cent posted it I believe, DJ Akademiks posted it I believe, Baller Alert posted it. The first two times were crazy. I caught a new wave and dyed my hair green. I started calling myself Disgusting Justin. My music was already crazy but it gave my brand new life. Females do whatever I say now.

HipHopDX: How much have you spent collectively on vegetables for shows?

HipHopDX: Do you think all of this is leading more people to your music?

Beatking: That exposed a lot of people to my brand. My fanbase knows this. I’m still climbing as an artist as well. I’m trying to get more exposure for my brand and my music. This has helped a lot. A lot of people who don’t know me are like “Who the fuck is this nigga? I don’t know who he is. I obviously must be late cause these females who are willing to do anything. Who is this nigga?” People are doing their research and making sure my shows are packed out. It’s all about the music and experience. I’m not paying these people. I’m not Chris Brown sexy. I’m just a ratchet ass nigga that’s jamming. It’s all coming back to my brand. People are doing it all over the world. I ain’t tripping off of people who copy me cause I’m just cool with people being inspired by me. What I don’t like is when people promote their club or event using my footage. Matter of fact, it’s one dude in Atlanta right now promoting his #cucumberchallenge night using my footage. Other than that, I’m no hater.

Gangsta Boo always jokes about me being a real “Known Unknown.” I was talking about my manager about that today. If you’re blessed to be around long enough, you will inspire somebody and next year will be ten years of me being in the game. Suede The Remix God tells me all the time when nobody knew me, I use to be on WorldStar watching all of your songs. He got the whole template from me. He’s said it on social media a lot though.

HipHopDX: Earlier this year, you released Club God 6 which featured one of my favorite tracks this year “Broke” featuring Fabo of D4L.

Beatking: I always wanted to work with him. Me and Fabo been following each other for years. My first show in Atlanta was in 2014 and were in the same club. I saw him and walked over to him just to tell him that I was a real fan for years. From there, we exchanged each other’s information and been cool ever since. When the cucumber videos started going viral Fabo hit me up like, ‘You crazy as fuck!’ I’m like. ‘Nigga coming from you?’ I told him about the ‘Broke’ joint and he was kind enough to lend me a verse and hook. Fabo cool people.

HipHopDX: The project also features “He’ll Shoot” with Project Pat. You’ve made no secret of your admiration of Three 6 Mafia and Hypnotize Minds. Was that through your work relationship with Gangsta Boo?

Beatking: I met Project Pat from when I used to post videos of me making beats and would ask fans to tag their favorite artist. One beat I made, folks started tagging Project Pat and he actually responded. I was doing that a lot last year. He DM’ed me asking me for the beat and I said it’s yours. I was so honored for him to even DM me. From there, Pat is cool as hell. We locked in now. I’m climbing up the Mafia ladder. All I gotta do now is get a verse from Juicy J and I would have worked with. DJ Paul, Gangsta Boo obviously, Project Pat, Skinny Pimp. I ain’t not hater. I just gotta climb a little bit more and become more official.

HipHopDX: Should we expect a sequel to last year’s Underground Cassette Tape Classic Vol. 2 despite the fact that it sort-of-flew under the radar?

Beatking: Honestly, me and Gangsta Boo talk about this all the time. Underground Cassette Tape Classic 2 wasn’t as successful as the first one because of lack of promotion. The first one was a surprise. The sequel, everyone was waiting for it but it just wasn’t promoted right. We were trying to find a publicist and that’s the hardest thing for an independent artist is finding a publicist that respects you. A lot of these publicists want to take your money and do nothing. We’re most definitely going to do a Vol. 3 when the time’s right. Gangsta Boo working on her new album right now. I believe it’s going to be called the BooPrint.

All these female rappers out right now rapping like her.

HipHopDX: In April you spoke with Adam of No Jumper about your issue with Travis Scott’s Astroworld album title following the release of both Astroworld and Astroworld 2 which featured “Scream.”

Beatking: This my thing, Astroworld was a theme park in Houston, TX. It meant a lot to everyone here. Astroworld does not belong to Beatking but it belongs to Houston. I was the first person to put it in album form. I was the first person to do that and he knows that. My thing is that it wasn’t a situation where I was asking for permission or something. If you knew that, the conversation could have been had since you’ve been following me on Twitter and sending me DMs.

Even when it dropped, I wasn’t salty about it because I had already dropped two Astroworld albums by then. I addressed it and kept it real. Then Sauce Walka broke down to me what they had talked about. When Sauce Walka told me with Travis Scott said, I just thought that was real fake. Like you one of them niggas. That’s why I made “Beatking Gotta Leave Houston” on Club God 6. He told Sauce Walka that the reason he took Astroworld from Beatking and not shout him out was because he tried to tweet that me back in the day before I blew up and I ignored him.

Nigga what? You could have said that in the DM when we were doing music. You could have been said that because I ain’t-a hoe ass nigga. I probably didn’t even see it but damn. If you feeling like that, you not the type of nigga I want to be around anyway.

Beatking: Right now I’m just dropping singles on singles. I already dropped Club God 6 so I don’t think I’m going to drop another album this year. I’m just making sure my presence is strong in the club. I have songs with newer artist so I’m just dropping them right now. Working with folks who say they’re inspired by me. I also signed artist including Big Jade from Beaumont, TX and her new single “Period Pooh.”