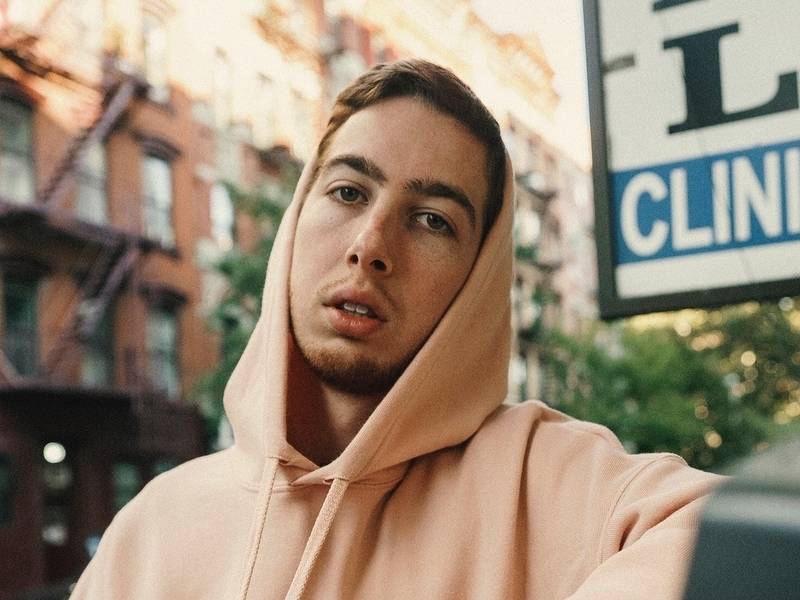 Marlon Craft has realized his potential on his new album Funhouse Mirror. While he’s been showing off his rhyming prowess since his days freestyling in his bedroom, his latest LP proves he’s truly a well-versed artist.

With the help of production from Black Milk and Statik Selektah, Craft has created his best work to date and proven Sony Music’s Same Plate Entertainment was smart to sign him. He’s also garnered acclaim by dropping a provocative video for the album standout “Gang Shit.”

Following Funhouse Mirror’s release, HipHopDX caught up with Craft to discuss his new LP and much more, including his artistic growth and cultural appropriation in Hip Hop.

HipHopDX: Listening to the album, I hear a lot of live instrumentation and a lot of jazz influences. What inspired the sound?

Craft: I’m the son of a jazz musician. My dad’s a jazz percussionist, so that’s in my blood. And I was always just really inspired by Hip Hop music that incorporated all this live instrumentation. It started when I first started going to see Chance [The Rapper] live in college with the band and then Kendrick Lamar’s To Pimp A Butterfly became my holy grail. I just always felt like live instrumentation was something that I wanted to incorporate into my music. I’ve been performing live with a band for some years, but I never really had the budget to get them in the real studio and put it down.

Live instrumentation, it gives you that feeling and that bigness to compete with the amplified feeling of some of these beats in Hip Hop right now with the heavy 808s and all that stuff. The way to compete with how big it feels if you’re not going to do that type of beat is to use live instruments. That was kind of my thinking.

HipHopDX: I think that vibrancy really comes through on the album. As far as producers, I know DJ Skizz and Statik Selektah are on there. Who else did you work with?

Craft: DJ Green Lantern is on there, did two joints. Black Milk did the outro and what’s really cool about that shit is that he actually … I sent him the stems. The intro is all live band from a jam that we put together. Then I sent Black Milk the stems from that and he sampled those stems to make the beats of the outro. So, he actually sampled the intro to make the outro.

Then I got Arbus Beats on there, who’s really the heartbeat of the whole album. He lives in Sweden. I met him on YouTube like two and a half years ago just from searching through so-and-so type beats or whatever. We’ve been working together ever since. I told him as soon as I had a budget, I would fly him out. I flew him out and he was here for a weekend and laid the foundation for a lot of stuff.

HipHopDX: That’s great. One thing that stood out to me was there’s a lot of discussions of alcohol and your use of it and the way it influences your life on this album. Do you view it as a vice or a coping mechanism? How does alcohol play a part in your life?

Craft: I’ve had anxiety since I was a little kid. I talk about that in a lot of my music and on the album, and it’s been kind of a theme in my life. I never really … I don’t use any drugs. I never have even tried any drug other than weed, which I don’t really smoke because it kind of makes me anxious. I never wanted to be … I always want to be in control. That’s part of my anxiety. I’m very hyperactive and I can get very stressed. Alcohol, for whatever reason, has just been something that has allowed me to calm down a little bit. In terms of my nervous system, it’s like I walk around at a 10. Everybody else walks around at a five. When I drink alcohol, it just brings me down to a five.

It’s definitely something I’ve used to cope throughout college and throughout the making of this album and everything like that. But it’s not something that I would consider, necessarily, a problem. But it’s just something that I’m always cognizant of, and I have a real desire to not be dependent on any vice. I think we live in such a viceful generation, whether it’s substances, whether it’s social media, whatever it is. I think a lot of the references to alcohol are me trying to figure out like, “Hey, how do I moderate this in a way that is still healthy and how do I try to achieve whatever it is that alcohol is giving me without needing alcohol?”

I try not to glorify it on the album, but it definitely was just a big part of my life, just something I was doing. Like I said on the album on the song “Personal,” I’ve been drunk for 25 days a month. I mean, I’m not drunk all day. Sometimes I have a beer or two, whatever, but I just would stand back and look and I’d be like, “Damn, this is something I’m doing a lot.”

It’s interesting. No one’s ever asked me about that, which I think actually speaks to how much we normalize drug consumption in music that no one ever thinks to make that a part of the conversation, you know?

HipHopDX: Absolutely. One of the more interesting tracks for me was the “(Not) Everybody” cut. It seemed like an analysis on arrested development and people failing to live up to their potential. Can you tell me about the concept behind it?

Craft: I been holding on to that song for a long time. That’s my dad’s favorite song. He fucking loves that song. That song is just about this idea — it’s this brutal reality that when you’re young, you look to adults. We look and we’re like, “Oh, well, you’re going to get older. You’re going to get more mature. You’re going to learn things over time.” And one of the hard realities of becoming an adult and coming of age is realizing that’s not necessarily true.

We don’t necessarily get better with time. A lot of people don’t mature, we just get older. And actually, the negative habits that we have or ways of looking at the world, our perspective just gets more and more ingrained in us over time if we’re not proactive in seeking our own growth and our own development.

I think we assume the world will keep progressing in certain ways. So, it can lead to a lot of apathy. But it’s like, “Not necessarily.” Actually, there’s a lot of times the shit all could just come crashing down on some doomful shit. I think it’s this thing that growth is not inherent and we got to work for it. We got to fight for it.

HipHopDX: You put out a video for “Gang Shit” that’s been well received. It seems like this is one of those songs that could come to define you, in a way. I think what impressed me so much about it was that I’ve seen people try to do songs like this before. It always seems like they take an approach of “I’m going to see the good in both sides.” But you make it very black and white. Can you tell me about that decision and what made you go that route?

Craft: Thank you, man. I think for me, I just wanted to paint a portrait of what is and how I view what is. I didn’t really want to offer a solution. I just wanted to move by making a piece of art that portrayed things in a way that made you understand and feel the realities of these issues that I’m talking about in this particular view on America.

I think sometimes attempts to offer solutions are … We’re talking about things like institutionalized racism, the gang mentality, toxic masculinity, these types of things. People have written entire dissertations and books on this and dedicated their lives. If you could offer the solution in a song, [it wouldn’t be complex].

HipHopDX: As far as the reaction to the video, I saw a lot of comments saying things like, “This is what being a true ally is.” Can you talk about being a white rapper and using your platform as an ally to put a spotlight on these realities?

Craft: I think when we talk about this idea of cultural appropriation, you talk about taking from a culture and not giving back. I think I have privilege in the space of the world and America and particularly in Hip Hop where I’m a guest. It’s not my space and I’m looking to make a living here.

So, I think it’s a responsibility of me to contribute my attention and my voice to be abreast on these type of issues that affect the communities that Hip Hop belongs to. But also, I’m capable of making something like a “Gang Shit” and see it through and do it the right way.

I don’t think that everybody … It doesn’t have to look the same for all white people that want to be involved in Hip Hop because everybody can’t do it. This is stuff that I’m passionate about. This is some of the stuff that I studied in college that I have a working knowledge of.

Mac Miller is one of them. He was super knowledgeable about the culture and contributed in a bunch of different ways using his platform. He didn’t draw attention to himself and just was a student of the culture. It wasn’t his vibe to make a song like “Gang Shit.” Everybody doesn’t have to do that. However, for me, it’s just that I feel like I’m capable, I’m passionate and that’s what comes out of me naturally. It’s my art and it’s my job to see it through and to be responsible with the platform that I have.

HipHopDX: More than anything, what stands out on this album is just how personal and introspective it is. There’s a lot of storytelling and learning who Marlon Craft really is, especially on songs like “Family.” Can you talk to me about your evolution as an artist from the guy freestyling in the bedroom to where you are now?

I also do think there was, admittedly, a thing like, “Yo, the level that this dude can rap at is undeniable. It’s undeniably elite, but the music is not necessarily undeniable yet.” For me, that’s what this moment is about. This growth is about becoming an artist, like Marlon Craft as an artist to the world and eventually, Marlon Craft as a musician.

I’m just super proud of the body of work in that respect. I want to make music that’s complete, that people carry around with them every day, that’s not an exhibition of like, “Wow, look at the skill being demonstrated,” but more “Yo, I feel this shit in my core.” Like, “This moves me.”