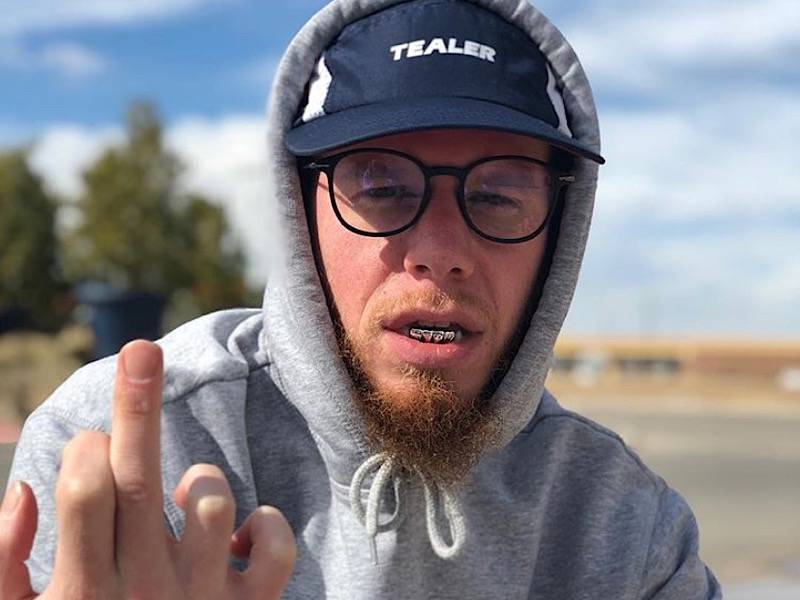 New York City, ny – Queens rapper Aaron Cohen knows a thing or two about the independent grind. He’s been on a steady and impressive incline since the release of 2013’s Potential Fans, but over the past year he’s begun to see the fruits of his labour really start to ripen — rocking 50 shows on tour with Roc Nation artist Jarren Benton, dropping an album (See Red), and snagging two major placements.

“I had a song placed in the Showtime series The Chi and got a track placed in a Hennessy commercial … me and my team are working hard and getting things done,” Cohen tells HipHopDX.

Cohen is now preparing to release his first project of 2019, Raw Every Day (R.E.D.) — a body of work he says contains a blend of really aggressive, violent songs, and extremely personal, introspective songs.

“I didn’t approach the project with a specific concept in mind. I wanted to just be as real as possible” Cohen explains. “I wanted to tell the truth. If I felt angry, I made an angry song. If I felt sad, I made a sad song. If I was feeling like the man, I wrote a song about being the man.

My album “Raw Every Day” drops next month 🔴🔴🔴 WHO’S READY FOR IT??? (Photo by @michaeldellapolla)

He continues, “I have a full range of emotions, I never want to make music to fit just one feeling. Maybe it would be easier to market myself if I kept it more one dimensional. But fuck that.”

The album was recorded in New York, Atlanta, Seattle, London, Paris and Belgium. “I’ve been running around the world so much this past year, it’s hard to keep track of what’s going on … honestly, it might have been more places.”

Now booking US and Canada tour for late summer. Contact @alsomgmt on here or through the email in my bio. 🔴🔴🔴

Another project on the horizon is a collaborative EP with Jarren Benton. The two have a number of songs already out in the world and having spent so much time on the road together, the project seems intuitive.

“Working with Jarren comes really naturally,” Cohen admits. “We both have aggressive styles. We both have bars. We both don’t really give a shit about trends.

“We also just get along well as human beings,” he adds. “We’re both dedicated to our craft, and neither of us are pretentious egomaniacs. So it’s easier than working with most rappers. Jarren and I actually share a manager now, Max Alcabes, which makes working together even easier.”

One of Cohen strongest suits is his ability to stay on top of his brand, reaching out to fans — many of whom are artists themselves. Always willing to offer feedback and advice he recently launched a live series on Instagram dedicated to sharing his platform with emerging talent.

“[Monday Night Raw] is really an opportunity for me to give back,” he explains. “I wasn’t raised to be selfish. My inbox is always full of links from rappers asking for feedback … I realized it would be a better use of everyone’s time if I responded publicly while giving them some type of exposure.

Tonight. Another session of “Monday Night Raw.” Submit music and tune in to get exposure and live feedback on my Instagram Live. We’re doing things official now, use the submission page on my site to submit songs. Link in bio. SEE YA’LL TONIGHT 🔴🔴🔴

“So far it’s going great, I’ve discovered a lot of good artists and they’ve got the opportunity to network and build with my fan-base. I see it continuing to grow. I’m flattered that people give a shit what I think,” he adds with a laugh.

Remaining independent is something that Cohen has been preaching in interviews for years, and it appears to have been a mantra that’s paid off. Albeit, he notes that it’s not easy — or for the weakhearted.

“Being an indie artist is a fucking adventure. You have complete artistic freedom, which is an unbelievable blessing. On the other hand, you’re putting up your own money, and all the risk is on you. It takes a lot more strategy and planning than a lot of people realize.”

Cohen and his manager are both self-professed workaholics — and even together they still can’t find enough time to do everything they want to do. “People see the end result, but they don’t realize we have to function as social media gurus, graphic designers, booking agents, PR experts and so much more,” he notes.

“People see rappers and think it’s a glamorous job. It can be … but being an independent rapper has got to be one of the most demanding jobs imaginable. I love it more than anything, but if you don’t, it’s not a good job.”