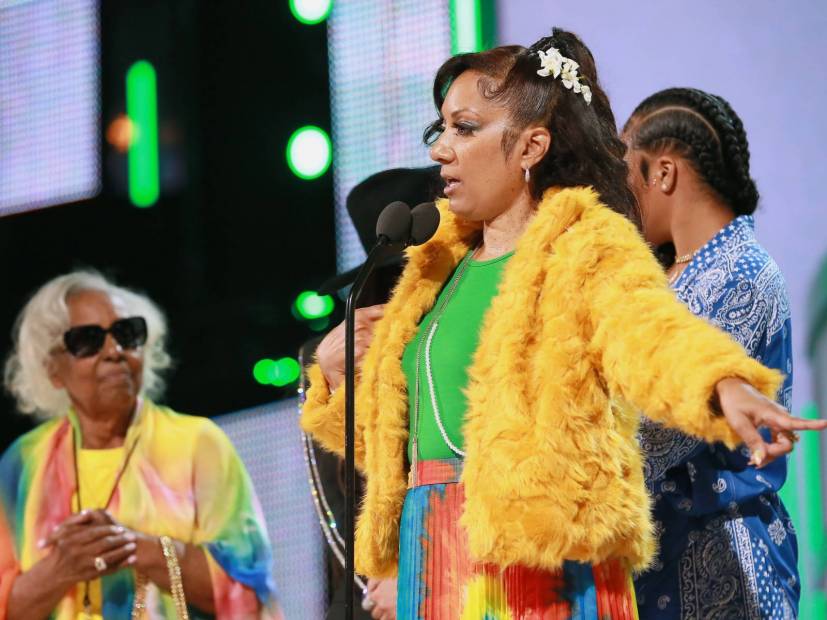 Dressed in a tie-dyed skirt and bright orange jacket, Smith went into a colorful account of the moment she showed up to the Marathon Clothing Store on Slauson and Crenshaw, the location where Nip was shot and killed on March 31.

Smith detailed the conversation she had with a police officer on the scene and revealed she’d had a spiritual experience before she left for the hospital.

“One of Ermias’s close friends was very traumatized,” she said in part. “I walked over to him and put my hands on his shoulder, and I told him, ‘Evan, look into my eyes, Evan.’ I said, ‘You know that we are spiritual beings having a physical experience, right Evan? You understand that, right?’ So even though our bodies die, as they call it on this side of eternity, our spirits lives.

When Nip’s father approached the mic, there was an awkward moment when Smith tried to get him to speak closer to the mic, but he told her, “Do your thing over there.”

Of course, Twitter had its commentary and most were intrigued by Smith’s words.

Nipsey’s mom pretty much said she felt her’s son’s spirit in his passing and that she received confirmation his soul was being resurrected when she saw the officer’s badge said ressurecctión. Not that hard to understand😪 #BETAwards

I’m not even finna lie, it might be the weed but Nipsey Hussle moms talking on the BET awards…. i was wondering where the speech was going it almost went over my head but the end part brought me back

Ppl who don’t understand Nipsey’s mom can only comprehend. THE DOOR IS OPEN, THE DOG IS BIG, I AM TALL. Etc

I really don’t know what to say except that I’m grateful BET gave Nipsey Hussle’s family time to say all that they needed to say. #BETawards

I was lost a few times in my life… but Nipsey Hussle's mom sent me into the quantum realm with that speech. #BETAwards2019 #BETAwards

I had to include Nipsey Hussle’s Moms messages on my list of things Im grateful for! #BETAwards19