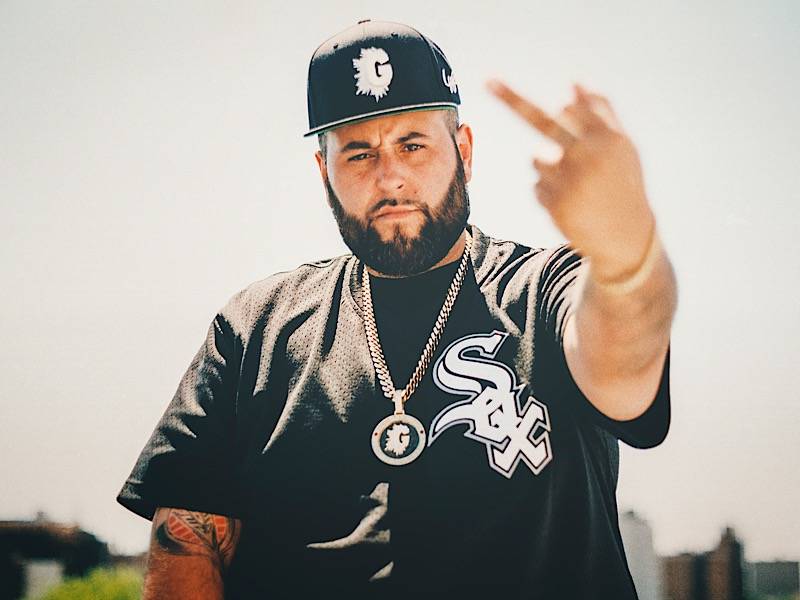 New York City, Ny – In the pantheon of battle rappers who also make songs (Eminem excluded), Nems undoubtably stands amongst the best of them. The Coney Island native, who made a name for himself on MTV 2’s Fight Klub, which stands as one of the first battle leagues — and first nationally broadcast battles — he had a rollercoaster career that seen him persevere for his passion, despite never getting just do on a bigger platform.

His journey, and his growth as a person and an MC are well documented on his latest project, which you can audibly hear the Coney Island Mayor bleeding his life force into.

The LP, Gorilla Monsoon (according to Nems himself) was a two-year labor of love. Building up his “Fuck Ya Life” merch over the past year — which has taken off (selling out weekly) — he notes that the meticulous nature of the creation process is one he wants fans to really walk away appreciating.

@FYLBRAND EVERYWHERE THIS SUMMER Repost via @newyorknico: My Coney Island brother, @nems_fyl pulled up with his Fuck Ya Lyfe mobile. Self promotion hustle game on 100000%. #MomNPopDrop #LegendsOnlyBBQ

“I took my time with the album … that’s the main thing I want to do now,” Nems tell HipHopDX. “Everything I do, whether it’s videos or music, everything needs to have replay value. People be like, ‘Let’s shoot a video,’ and I tell them, ‘You gotta give me a treatment, we got to do this, x, y, or z.”

He points to the disposable nature of music and videos in the landscape of today’s industry. “I’m not trying to do that no more,” he says, describing the previous moments-notice style of video shoots and recording he once did. “You watch that shit once and you never want to watch it again.“

Though not a front running theme, Gorilla Monsoon does provide explicit commentary on a generation of rappers who either don’t consider themselves rappers, or scoff at the previous generation’s need to analyze and rank music according to lyrical content — referring to them as USPA clothing, which helps create a delimitation between fake and real.

“I’m getting influence from everything,” he says, revealing his eclectic taste in a vast array of musical genres. “I listen to everything, but Hip Hop has become the genre I listen to the least.”

He continues, “I go on apple music every Friday to see what’s out … now I’m at the point where it’s like if a fucking rapper from 20 years ago puts out an album and I know it’s probably going to be wack, I still gravitate to that because everything else is so trash.”

Still, while explicitly calling a spade a spade, a level of blunt lyrical disrespect that made him a battle-rap fave in his heyday, he notes that he doesn’t hate on anyone out here getting money.

”Go get your money. But, it’s not for me. I don’t hate on it. It’s just like when I sit back and analyze, it’s like, Yo, thank you. Thank you for being trash, my nigga,” Nems says with a laugh. “When my music comes out it will be well received because people will be able to hear the difference and see how much iller my music is.”

Having first risen to notoriety in the early 2000’s, yet not bubbled into mainstream fame — Nems remains underground, which suits him just fine. His fanbase remains extremely loyal, and is rapidly expanding as the gritty sound of New York is coming back into prominence with the rising notoriety of acts like Conway The Machine (of Griselda), who actually appears on the LP.

He says the collaboration is one that fans have been salivating for — however, Nems insists that though he loves what they’re doing, he doesn’t want to be lumped into other competing movements.

“I don’t want to be linked to the success of anyone else … I don’t want to do nothing that’s been done before,” he explains. As a testament to his individuality, he points to the listening session for the album, which he held on the F train in New York City, which runs from 179th Street in Jamaica, Queens, to his home-base in Coney Island.

“Whatever is the opposite of what they’re doing, that’s what I’m doin,” he adds. “I’m not with that following shit. I wanna be different man. I don’t like that same shit.”

It’s this very “follower-based” culture that Nems’ entire movement appears to counter. As an example, his producer Jazzsoon, the architect of the album’s sound, is someone who just doesn’t place a strong personal emphasis on social media.

“Imagine if I looked at [Jazzsoon’s] followers and was like, ‘Man, this shit ain’t enough. I don’t want to work with him.’ This album that everybody is fucking with would have never came out like, you know what I’m saying?

“He don’t care about followers because he’s outside. Actually living in the shit that all these figures online be talking about.”

The industry’s obsession with chasing artists with followers, which is ultimately a shakey metric to base entire business plan around, is one that Nems finds especially frustrating.

“Labels are clowns, fuck all of them,” he states. 2019 I don’t need on. No labels help me. I still be getting the shit out. This shit is still popping without them. It might take a little bit longer for the word to get spread out, but it’s dope shit … it’s going to sell itself.”

What’s exciting about Nems, if you’re new to his music, is the richness of his back catalog of content already out. Gorilla Monsoon is just another chapter. Consistency, as he has discovered, is everything — and he alludes his music to Blue Magic, this infamous heroin that made the late-drug kingpin turned informant Frank Lucas his fortune.