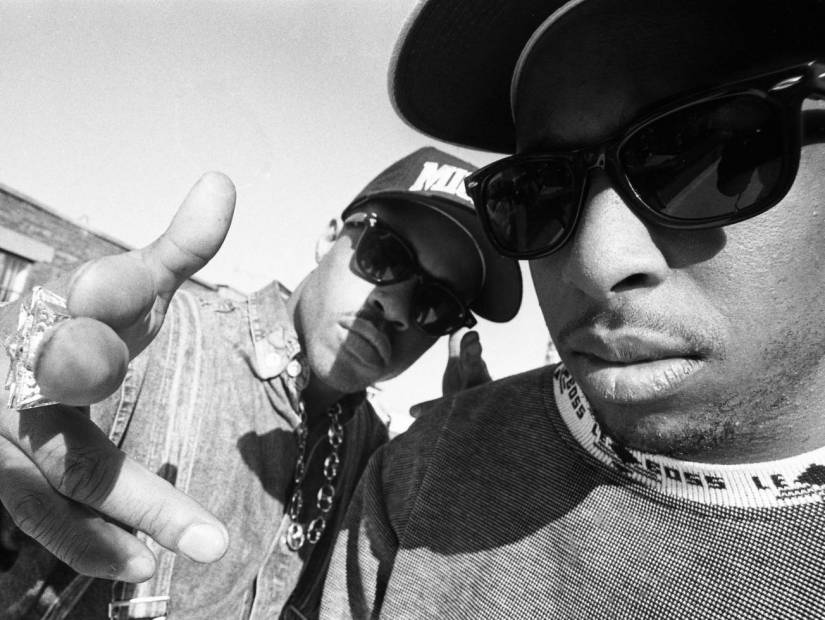 Nine years to the day, the Hip Hop community suffered a tremendous blow with the passing of Keith “Guru” Elam, the incredibly skilled lyricist who made up the emceeing half of the venerable rap duo Gang Starr.

While fans will remember the late Guru and the group’s production muscle, DJ Premier, weren’t exactly on the best of terms at the time of his death, the end of the road usually forms a friendship bridge. And the conclusion of Gang Starr brought just that.

DX: I still get a chuckle to this day how you slipped in the hospital undetected. There was all this security and red tape, and you were like, “I just saw him the other day. What y’all talking about?” I just always thought that was super gangster.

DJ Premier: Yeah, man. It was risky, but like I said, I love a challenge. I’m like, “I’m gonna figure this out. I’ve got to see him.” Again, I always credit his nephew, Denzel. His nephew was the one that stressed to me … His exact words was, “If anybody needs to see him, besides his family, it is you,” and I was like, “Dude, they’re not gonna let me in.” He said, “I don’t care, man. I don’t care what you do. Find a way.” He said it in a way … The tone was so piercing, like a knife in my stomach, that I was like, “All right, I’m going Monday.”

I called two of my homies that would definitely hold me down if drama pops off, and they were like, “We’re going with you,” and then they went in first.

They went in to make sure they could get in, so they could tell me the coast was clear for me to get in, and so they were already in there before I was. They texted me and said, “Come on in, come on in. Now, now, hurry, hurry.” I got caught, and then once I got caught, Guru’s father was the one that said, “Hey, if they run on you, ask for a proxy advocate, and they know you ain’t gonna be talking on that level unless you know what you’re talking about.” They have to let you see a proxy advocate. If they say, “Well, the proxy advocate’s in a meeting right now, so it’s gonna be about another hour or two.” I said, “Okay, I’ll wait,” and then I just waited and waited. That wasn’t working.

They were never showing up. I see them whispering and staring at me, and I’m just like, “Man, I’ve got to figure out another way in.” Thank goodness, the regular public bathrooms in the hospital were under repair, and I really did need to use the bathroom. I even went around the corner to see … My homie was like, “Yo, the side doors, we can go through one of them.” I’m like, “No, those are all emergency exits. The alarms will sound.” I’m like, “That’s not good.” We went around there, just to take a look, and I see a black guy taking a lunch break, smoking a bogie outside by the dumpsters, and I said, “You know who I am?” He’s like, “Yeah, you Gang Starr.” I was like, “Yo, man. Is there a way you can get me in through one of those doors?” He’s like, “Man, I work in the morgue.” He said, “It’ll be hard to do, but I’ll tell you what.” No bullshit, he said, “If you listen to my demo, I’ll sneak you in.” Even though he couldn’t do it, I was like, “Motherfucker, I’ll sign you if you can get me in.” He said, “I’ll be back.”

He took too long, I got impatient. Everything’s with my gut. I went back in and told them, “Can I use the bathroom? I’ve really got to use the bathroom.” The lady was like, “I’m gonna let you use the bathroom, but you’ve got to come right back, and I’m gonna time you. I’m gonna give you 10 minutes, and you better be back.” Right when I said, “Okay,” she left me behind, where I can go toward the elevators and go down the hall, ’cause the bathroom’s down there, some black dude rolled in, in a wheelchair, and started causing a ruckus at the information desk, about seeing his doctor, and just causing distraction” “I wanna see my doctor now,” and they knew his name.

They were like, “Mr. Samuels, okay, we’re gonna let you … ” He goes, “No, I wanna see him now.” He’s yelling and screaming. He said, “Y’all did this shit to me yesterday!” I’m like, “Damn, he’s got their whole attention. This is the best time to go up to the floor,” because Guru’s nephew and them had already told me what room to go to, if I can get in there, so I knew to go to room 269. I didn’t get on the elevator yet. I was walking, and seeing, “Damn, the elevator’s that close to me from the bathroom,” and you could still hear that guy at the front desk, yelling, “I don’t give a fuck.” I mean, he’s really causing a ruckus. I see the numbers on the elevator, when it’s counting down, it’s coming from another floor, and it was on five.

I looked, ’cause it’s right by the gift shop, and I saw it go five, four, three. I was like, “Damn, let me see if I can jump on the elevator without the lady turning around and seeing me get on it,” ’cause I had the dude still causing the distraction, yelling at the information desk. Soon as it opens, a family of about five Latinos, but really big people … He looked like a football player, and even the wife was a sizeable women. They were getting on with their kids, and I hopped on with them, and stood behind them, so I could be blocked, where they couldn’t see me. They said, “What floor you going to?” I said, “Two.” They said, “Oh, we are too.” I was like, “Great.” As soon as it opened up on the second floor, I kind of stayed bunch up with them. I remember the nurse, “Yes, may I help you?” They said, “We’re going to see whoever in 268.”

I was like, “If they’re going to 268, I’ll follow them, because she’s leading them to the … ” Then I doubled back and went to 269, and that’s how I got in there. She caught me again. She was like, “Hey, you’re not supposed to be in here.” I explained. I showed her the CD, ’cause I had my Moment of Truth CD with me, and then my Gang Starr shirt. She didn’t understand the logo part, but I said, “Look, that’s me and him.” I showed her the Moment of Truth CD. I took the little folder part out since they have other pictures of us. I said, “See, that’s me and him.” She goes, “Okay, I’m gonna give you five minutes, and then you’ve got to go. I’m gonna get in trouble. You ain’t supposed to be in here.” I said, “That’s all I need, is five minutes,” and that’s how I was able to say my piece.

That’s exactly how it happened.

DX: How does Gang Starr exist in the present day?

DJ Premier: Touring, merchandise, and branding — that’s where the money is and I’m glad that your brand makes enough money to feed more than just myself. It’s feeding Guru’s family.

His sister, son, his son’s mother, and nephew are all part of Gang Starr Enterprises, and we all share that together. I make sure his half goes directly to them, and I’m glad our brand has stood the test of time, being that we come from the late ’80s into the ’90s era, and April 19th will be nine years of his being passed away. I didn’t see him for six years after the Ownerz tour, so you add that up with the nine years, that’s 15 years, and later. Look, the brand still is keeping lights on, paying the bills and still letting his son buy Balenciaga [Laughs]. It’s a beautiful thing.

That’s why, selling our merch makes a lot of money. I sell it on my site, and it’s dope because I’m able to … 50 percent goes directly to his son’s estate and his family, and it’s still so good that, when I check the numbers of what we sell, especially when we do these capsules, and leave it up for only a couple weeks, and then tear it down, those make a nice chunk of money, and it automatically goes right to the estate, and his son can eat off of what his father’s legacy established.

DX: Well, speaking of the music, I mean, obviously, you guys didn’t benefit from streaming. How do you look at Gang Starr albums on Apple Music or Spotify now? Is that bringing new life into the legacy, you think?

DJ Premier: Yeah, I was very anti, because of the payouts and everything, but I have a great attorney, and my attorney warned me, early, about how it’s gonna work, and how we’ll be able to make it work in our favor, and all that stuff, and still, I’ll always release physical product. Anytime I release something, I always make sure we do vinyl. I always make sure that we do CDs and something physical. The digital word is here, so it’s just another extension of how to get it out there. You’ve just got to know how to negotiate your deals, but the label’s got to make sure they include the artist, because our deals were set up with three different types of formats, when we signed our contracts, and that was cassette, vinyl and CD.

It didn’t involve streaming. If you’re gonna involve that now, you’ve got to sit down with us and negotiate a new contract to make that an additional way of our product being released and how we’re gonna break those percentages down to eat off of. I hate the business side of it, but I had to become a businessman, just because there’s no running from that. If you really, really wanna make the money-money, you’ve got to stay on top of your business, and that’s the part I hate to have to focus on because it gets in the way of focusing on creating new music, but you have to do it. I had to set aside a good hour or two with my manager and hear him run it down to me, and then I’m good at asking questions. If I don’t get it, I definitely will push it till I do understand it.

In addition to the commemoration of Guru’s passing, Preemo is also celebrating the 25th anniversary of Gang Starr’s commercial breakout album, Hard to Earn as well as Nas’ Illmatic (which coincidentally shares the same release date as Guru’s death).