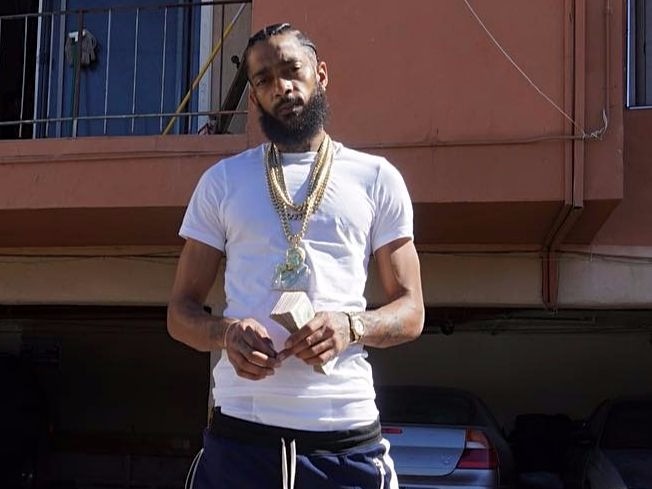 Los Angeles, CA – Nipsey Hussle‘s untimely passing has had a profound effect on the masses as evident by the more than 20,000 mourners who showed up to celebrate his life and legacy at the Staples Center on Thursday (April 12).

The artist born Ermias Asghedom lost his life at 33 after being shot up to six times outside of his Marathon store in the Crenshaw District along with two other surviving victims on March 31.

One of the men, 56-year-old Kerry Lathan, was taken into custody on Friday (April 12) following his hospital release for associating with the late recording artist, TMZ reports. He was shot in the back and is wheelchair bound as a result.

At the time of the shooting, Lathan was reportedly out on parole after serving 20 years in prison for murder. One of the stipulations of his parole included not associating with any known gang members and police claim Nip is part of known South Central Los Angeles gang, Rollin 60s Neighborhood Crips.

The reason Lathan met up with the Grammy-nominated rap star at his Marathon Clothing store in the first place was so that Nip could lace him up with some fresh gear so that he could look nice for his family when he finally saw them.

This particular day, Nip pulled up to his store without notifying his team and he was shot and killed by 29-year-old Eric Holder shortly after his arrival.

Nipsey’s funeral procession held at the Staples Center may have been sold out but various outlets such as BET and TIDAL offered a free livestream so fans can still experience his homegoing from work or home.

The procession was followed by a 25-mile “victory lap” to a Crenshaw funeral home. He was laid to rest at his repast today (April 12) at the Forest Lawn Memorial Park cemetery where his close friends and family liberated their goodbyes.