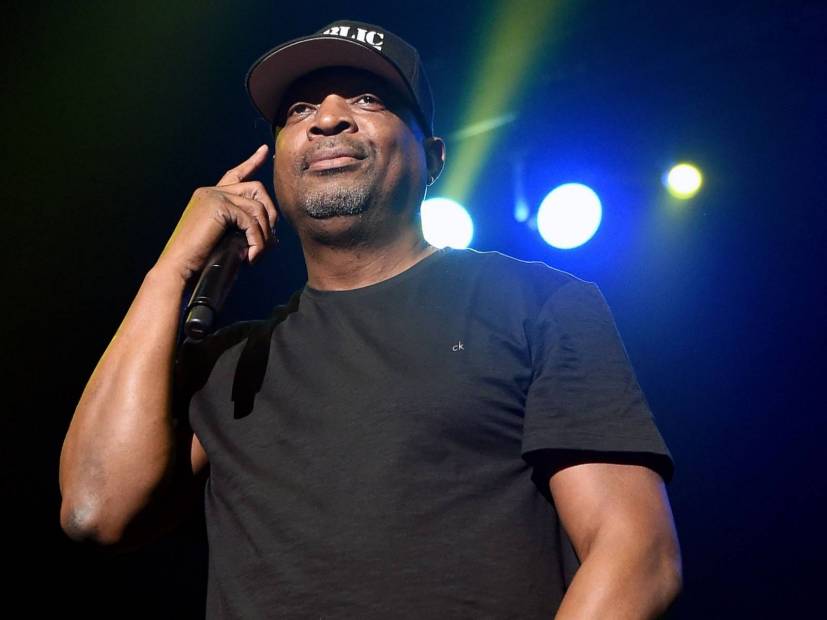 Before Chuck D was the inimitable force behind Public Enemy, he was a child of the ’60s. Naturally, he grew up on psychedelic rock and other popular music at the time such as The Beatles, The Doors, Pink Floyd and Led Zeppelin. As a result, the 58-year-old Hip Hop legend has an affinity for music from that period.

“I grew up in the ’60s and ’70s, so these records were on the radio,” he says. “Matter of fact, a lot of these Hip Hop producers grew up on all those songs that made them more Hip Hop. Grandmaster Flash — all these guys do rock. Everything comes out of the blues anyway. Johnny Cash is not country. Johnny Cash started out as kind of like rhythm and blues country with a little bit of rock. He made rock out of that.”

Last month, Spotify launched a new podcast on The Clash called Stay Free: The Story of The Clash, which is narrated entirely by Chuck D. Boasting eight episodes, the series gave the Rock and Roll Hall of Famer a chance to flex his deep musical knowledge and revisit a bygone era.

Bill Stephney — who played an integral role in marketing Public Enemy as political titans in the early days – thought Public Enemy could become The Clash of Hip Hop.

“Bill worked with an alternative music station in Long Island, which was influential in bringing The Clash to New York,” he explains. “And so it was Bill’s idea to see if Public Enemy could be The Clash of Hip Hop. So that’s how we got with Stephney. In an area where music seemed to kind of lose itself to affluence … well, it just got in a content level of marketed decadence.

“The Clash survived all that. They were like this is no longer for the people, so we’re gonna have to make music for the people. I think that’s where The Clash came out to be totally different than anything else ever before.”

Public Enemy’s catalog is peppered with endless rock influences — from Slayer to Deep Purple and everything in between. At the time, it was a bold move considering most of his peers were sampling soul and funk records.

“I don’t think they were old enough [for the rock samples],” he says. “We saw Run-DMC, who brought us into the industry, as the gateway [to use rock]. We grew up with ’70s AM radio. On our first album, Vernon Reid [of Living Colour] plays on ‘Sophisticated Bitch’ and of course we teamed up with Anthrax for ‘Bring The Noise.’ To me, a great rock album requires volume, diversity and not everything always being about the guitar.”

In the spirit of The Clash podcast, Chuck D — who’s a self-described “hippie without the weed” — named some of the most influential rock albums on his list, although he couldn’t name just 10.

Below are 13 albums that made a lasting impact on the Prophets Of Rage MC and pioneering Hip Hop luminary.

“Well, it’s Jimi Hendrix [laughs]. It was definitely a look into the beauty of the guitar and it was a great entry point for me. I went to a high school that was heavy in Jimi Hendrix. I come from New York so it was a heavy time for pop, rock and disco. Jimi Hendrix was a big part of the culture.”

“It was my introduction into Pink Floyd because I didn’t really get them in high school or get into their later works, which everybody talks about. When I heard this music, I was more clear on the psychedelic homage as opposed to the blues. It was kind of like the beginning of prog-rock. Tom Morello tried to explain the appeal, but it was beyond me. The Syd Barrett stuff I dug though. I learned a lot about it on my trips to the U.K.”

“Myself, B-Real, Tom [Morello], Tim [Commerford] and Brad [Wilk] all happened to be under the Sony umbrella at the time. I had received a demo with a cassette box that had a match in it. It caught my attention. I couldn’t do anything with it, but it turned out to be the same band that later had a deal with Epic. We’re were all in the same Sony system at the time. I remembered it [the demo]. I was like, ‘Oh these are those dudes?’ It was a strange package idea, but it definitely caught my attention. It was the most outstanding demo I’ve ever seen in my life.”

“Once again, this is not the first Funkadelic I was exposed to, but I would tell you later on when I got into Funkadelic, this is the one I listened to the most and still to this day. I like psychedelic music. Once it was explained to me it was a mix of funk and psychedelic, that made me get it. It made me understand.”

“The Rolling Stones … well as kids, we didn’t listen to albums. We listened to pop radio. All those records from their first 10 records were singles. ‘Satisfaction’ played on the radio a lot and it happened to be on that album. As black folks, we didn’t get into album couture until the ’60s and ’70s with people like Isaac Hayes or Earth, Wind & Fire.”

“Motown put out albums, but they didn’t put out albums for the market place. This was in the beginning of album-oriented art starting to be urbanized. Rare Earth was like the rock band equivalent of what Motown tried to reach. Motown was in Detroit, which was more of a heavy metal region. Around that time, you had MC5 and people like Alice Cooper, they were heavy on their rock. Motown was trying to get involved. Rare Earth was their equivalent of trying to get in the rock realm.

“They were radio hits. Later on, Led Zeppelin was a great foundation for sampling for Beastie Boys and so on. It was a no-brainer because of the power in the sound and their grooves. [John]Bonham’s drums. [Jimmy] Page’s riffs. Robert Plant’s vocals over [John Paul] Jones’ bass — they had the right combination. They were an incredible sum of all their parts. Even when they’re on their own, they’re powerful, but when they came together, it was like god ordained them to come together.”

“The biggest Rage fan out of Public Enemy is Professor Griff. I remember being on tour and him bringing it to me and being like, ‘These brothers, man.’ Songs like ‘Bulls On Parade’ struck me as being powerful ditties. It sounds like a dude with a knife in him. You can’t easily imitate that. It’s totally original. Same thing with Zack de la Rocha’s vocals and Rage Against The Machine’s power.

“Vernon Reid started Living Colour. But it’s not just him. It’s Doug Wimbish, Will Calhoun on drums and you got Corey Glover who is an incredible vocalist. They are very solid. New York was heavily under some racial shit that was going on. As Public Enemy was addressing it, Vernon had been talking about it with the Black Rock Coalition. It was like, ‘black men can play rock, too’ thing. It was an intellectual organization that was going head-on with the stereotypes and politics of the mainstream press at the time.”

“‘Tomorrow Never Knows’ is kind of like the beginning of noise rock to me. To me, The Beatles are unbelievable. I grew up on them. One of the first records I remember is ‘I Want To Hold Your Hand’ by The Beatles. Here you’re a little boy and you’re singing, ‘I want to hold your hand [sings].’ I was about 4 years old when The Beatles came out. It was solid. It was easy to sing. When they ‘broke up’ in 1970, I used to listen to the radio and their records would play forever on pop stations. My favorite one is ‘Let It Be.’ I have come to the age where I further understand them. I never noticed direction, I just knew they were incredible.

“Pop radio, again. Jim Morrison’s vocals are incredible. The older I got, the more I understood the parallels in his music. I happened to be good friends with Jac Holzman who founded Elektra.He signed The Doors. He’s given me advice with what to do with a boutique label like always have fun and don’t get caught in the bureaucracy.

Rage Against The Machine – The Battle Of Los Angeles (1999)

“It’s Rage. I was surprised … look, that was the last album they did. Acts don’t usually get stronger, but they kept getting stronger. Their mosh pits kept getting bigger and bigger. It was just a different machine.”

“Oh man, Ice-T is the superman of Hip Hop who never gets the respect for doing so many innovative things. When Ice-T touched metal back in the day, everybody was afraid to touch that. But you had to bring something to the table — power, energy and speed. You just can’t fly it in. We touched upon things with Anthrax and stuff, but when Ice formed his own metal band, that was next level shit. A lot of bands who wanted to do rap-rock in the ’90s, they hit a wall. He had film and television to fall back on, but he still went at it really hard. To be able to maintain that energy at that level was a little difficult for most people.”

“Anything by Anthrax, including Persistence Of Time and Among The Living. They taught us that world words were very, very, very serious. Yes, I’m very biased when it comes to Anthrax. Loved Anthrology and Classic Anthrax: The Universal Masters Collection, too. ”

“I was 17 years old when The Clash was kind of known. Did they have a tremendous impact on me, no? But they did on Bill [Stephney]. He said, ‘I think you could become The Clash of Hip Hop.’ It didn’t fall on deaf ears. Although we met in school [Adelphi University], we lived in close towns. That also helped. Songs fill the context of the time they were in. You could repeat the music or the sounds, but you can’t repeat the times. The context is difficult to explain. The feeling of the era is what dictates sound of that magnitude — like with The Clash.”

The next episode of The Clash podcast airs on Spotify this Thursday (March 21).