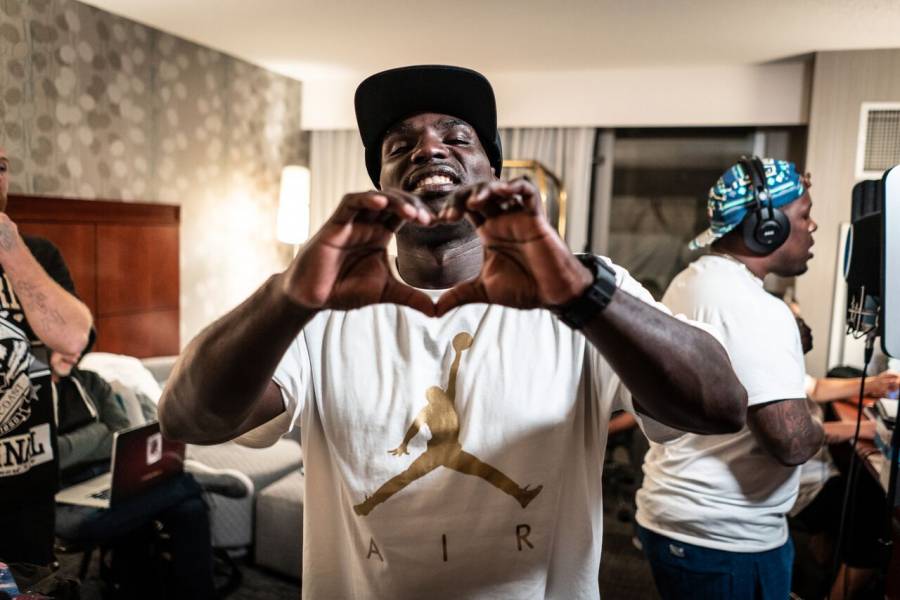 After 2 Decades Of Incarceration, X-Raided Is Ready To Carve Out A Positive New Legacy

Sacramento, CA – In 1992, just as his career was taking off, Sacramento rapper — and (former) 24th Street Garden Blocc Crip gang member — X-Raided was arrested along with four other men in connection with a deadly home invasion.

He was ultimately sentenced to 31 years to life, of which he served 26 years before being released on parole in September of 2018.

While over two decades off the streets would likely be a “career-ending injury” for most, X-Raided thrived, managing to release well over 23 projects, consisting of albums, EPs, mixtapes, collaborative efforts — even compilations.

However, according to X, recording music outside of the prison system has been a welcomed change he wouldn’t trade for the world.

“Being able to make music in the studio has been amazing. I felt like it was so difficult to record in prison,” he tells HipHopDX about studio life as a free man. “Once I got home and I actually got in a real studio, I just felt faster and freer.”

He continues, “I’m never going to take it for granted. I feel a huge sense of gratitude for being able to do something that I love with so much freedom.”

Having been arrested a day before his first solo LP, Psycho Active was released, X — who was a buzzing new artist — faced (in addition to a life in prison) the threat of being artistically silenced. “I went to prison and didn’t know if I would ever be able to record again,” he says.

His drive to record the music he had already written led him to take measures to secure the necessary means to pull it off. His sophomore LP, Xorcist, was recorded largely over the phone throughout his trial, but by his 1999 release Unforgiven, he procured recording equipment — much to the bewilderment of prison staff.

“I bought and paid for anything and anyone who could help me be able to make my music,” he explains. “I also had a lot of relationships that afforded me the ability to do certain things.”

A 1998 Vibe Magazine article had (incorrectly) stated that he had used a DAT machine to record his third LP, but X is quick to clarify that it was actually a minidisc recorder — which logistically, makes way more sense. “Land Of The Lost” and “Mama’s Pride & Joy” — two songs he says are among those he’s most proud of — came out of these sessions. However, he’s reluctant to elaborate on some of the fine details on how he was actually able to pull off such clean recordings and release so much music.

Though he says he regrets nothing, he alluded to not being particularly proud of how he went about getting his music recorded in his early years. As time went by though — after having numerous make-shift recording studios discovered and dismantled — he found a legit way to create.

“I got with the arts and corrections program and toward the end of my term built a full studio at RJ Donovan Correctional Facility.” As he notes, the more he did things the right way, the more freedom he was eventually allotted.

Following his September 2018 release, he’s been making up for lost time — 26 years of lost time to be exact. “No other artist could have done [26 years] and came home to a fan base waiting for them,” he says humbly. “Who else could pack shows and get support like I do … I haven’t seen it.

“My fan base has been incredibly consistent during my absence, and now that I’m home, they’re coming out to my shows — and it’s generations of them,” he adds. “Families have been loyal to my music and I’m going to continue to be loyal to them.”

You can hear obvious excitement as X talks about his Execution Of X-Rated tour, which has been sold out thus far. After over two decades, it has been the first live experience for fans of the Sacramento MC.

Something he’s found particularly endearing is meeting people who wrote letters to him for 15-20 years. “They’re coming to the show, bringing their CD covers and posters for me to sign … It’s been really, really, really encouraging to be out there with the people. It’s been beautiful.”

Though he has a large discography to perform, his experience for the past 26 years has seen him embrace positivity — something that is bleeding into his new music and future endeavors.

“I would like to think my new material is age-appropriate, matured music,” he says. “I want people to walk away from having listened to what I had to say and understand that I was motivating them to their greatness.”

X is currently shopping and reality show centered around his experience leaving prison, and what he went through while he was locked up. “I’m getting back on track, getting out on tour on the road, making new music and things like that … my show is really about all those things,” he says.

“It all boils down to a human drama about someone who made epic errors and who redeemed themselves … It’s just all about redemption, overcoming obstacles and adversity,” he adds.

He also has an autobiography — titled Execution Of X-Raided — that he hopes will stand as one of the most comprehensive psychological studies ever done on someone who has been locked up or in a gang.

“When it’s all said and done, I would like people to remember me as somebody who was resilient and who had a positive impact on the community,” he says of the legacy he hopes to create in this new chapter of his life.

“I’m hoping that I can set out a blueprint for anyone who’s thinking about making changes in their lives so that they’ll see that there is a path to take to do so.”