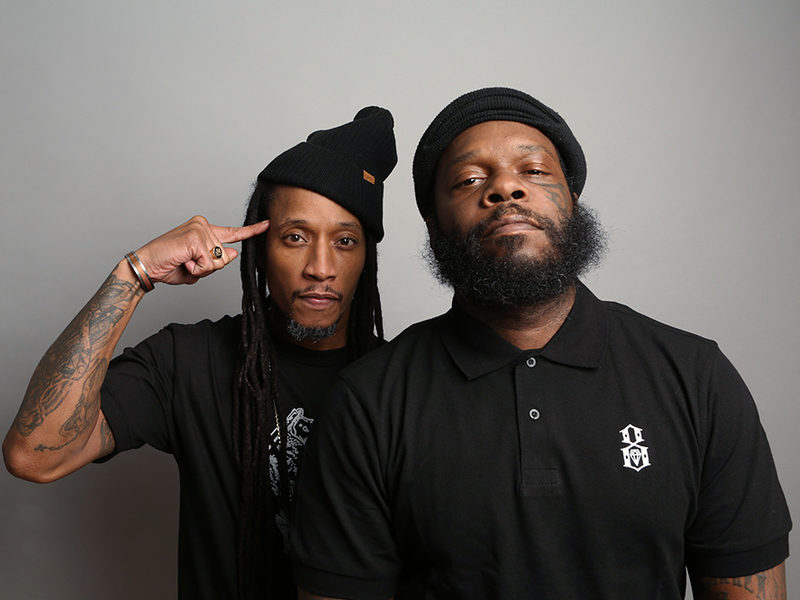 Smif-N-Wessun are finally back. On Friday (February 22), Tek and Steele will make their official return with the release of a new album titled The All.

The LP, which is produced by 9th Wonder and The Soul Council, is their first project since 2013’s Born and Raised EP. On top of that, it’s their first studio album since 2011’s Monumental with Pete Rock.

Despite the long layoff, one spin of The All proves the Boot Camp Clik members show no signs of rust. In fact, the LP might be their best work since 1995’s classic debut Dah Shinin.

While speaking to HipHopDX, Tek and Steele are clearly eager to see how fans receive their new project. They know Smif-N-Wessun’s been out of the spotlight for too long, so the duo needed to get back on people’s radars.

“I think that it’s part spiritual and it’s part desperation,” Steele tells DX when asked why now was the right time for a return. “Once you start getting in a seven-year, ten-year window … quietly, it has been a long time. Not because we slowed down our process but because we’ve been doing other stuff. So for us on a spiritual level, seven years for us already equates with the God, the seventh letter made, the ‘G.’

“The seven for us is spiritual because now it’s like seven years, this is our seventh physical release. Now when you start saying our release comes out on 2/22, we’re playing with a lot of different esoteric numbers. And I think whether we adhere to it or not, it has been given to us. It’s a fact, we’ve been blessed. And now it comes like it’s our time. Let’s say The Most High said, ‘Enough is enough. It’s your time, let’s do it.’ That’s how I look at it.”

With The All, Tek and Steele are re-establishing a connection between the Boot Camp Clik and 9th Wonder, who often produced for the late Sean Price and made three albums with Buckshot. Duck Down Music co-founder Dru-Ha reached out to 9th and shortly thereafter, Smif-N-Wessun were off to work with the acclaimed producer and his Soul Council team.

“We traveled down to North Carolina for this one,” Tek says. “We took it out of the borough, out of our comfort zone. [9th and The Soul Council] opened up their arms to us. It was just like family. It was like two professional No. 1 ranked boxers in the ring going at each other, so you can imagine how the fighting goes.”

9th set out to help the duo recapture the magic of their classic debut. But Tek and Steele also note how he stressed the importance of not rehashing what they’ve done before.

“9th set the tone because he reminded us that Dah Shinin is one of you guys’ biggest things,” Steele says. “It’s when you made your impression. Let’s create something that has that same overall tone without trying to do ‘Bucktown’ part two or ‘Sound Bwoy’ part two.”

Tek adds, “That was some of his exact words. He let it be known, we’re not trying to duplicate Dah Shinin. But, we’re trying to let the people know that y’all guys are still here. Y’all still in tune. Reinvention is what it’s about.”

During their time in North Carolina, Smif-N-Wessun worked nonstop. 9th, Khrysis and the rest of The Soul Council were more than willing to participate in the tireless studio sessions.

“We probably was out there for 14 to 16 days, something like that,” Steele recalls. “Just straight banging out music. Again, I guess the part of our desperation or our hunger was knowing that every day was an opportunity for us to create. So from sunup to sundown, we was putting that forward and then we had these geniuses [for producers]. It was no pressure for them.”

Tek remembers, “But what was crazy, these dudes wasn’t sleeping. We was probably getting four or five hours of shut-eye and right back up into the spot the next day. And Young Guru was out there for two, three days with us. So, we was drawing the inspiration the same as they was drawing it from every channel and vibe and spirit that was out there. It wasn’t no type of ill manners towards each other. Nah, it was all family love and we got something incredible.”

While the sessions produced plenty of songs with Smif-N-Wessun’s signature sound like “Let It Go” and the Rick Ross-assisted “Let Me Tell Ya,” it also allowed Tek and Steele to stretch their musical wings.

Songs such as the breezy “Ocean Drive” or the deeply personal “Letter 4 You,” which was inspired by Ta-Nehisi Coates’ Between the World and Me, show the two excelling with a completely different style.

“For Smif-N-Wessun to be these hardcore guys, so to speak, those type of tunes are tricky to do,” Steele says. “You don’t want to go too far off the beaten path where you just sound like you’re trying to be like somebody else. But then you have real experiences. We really have girlfriends. We have family members and stuff like that. We really do other stuff. So, it’s not all just this bravado, tough guy thing all the time. It’s great to be able to express those type of concepts.”

The All is the exact type of album that Smif-N-Wessun needed to make in 2019. Still, the duo recognizes that no matter how good the LP is, it cannot escape the large shadow cast by Dah Shinin.

As their debut approaches its 25th anniversary, Steele tells DX it’s a testament to their longevity in Hip Hop.

“Me personally, I’m still dealing with the reality of that because that’s a big accomplishment, especially in this profession of ours,” he says. “Dudes don’t stick around that long, man. We got a song on our first album where we talk about PNC, and we talk about Rambo, Sean Grady and this guy … he only lived 21 years on this planet. So, our album is older than some people’s lifespan. To try to wrap your head around that, we gon’ see what happens when we put out The All. Hopefully, we can have this energy that makes us feel comfortable enough to know that we’re important here [and] we’re loved here.

“Our whole bid on this rap tour has been a crazy ride, a rewarding ride — good, bad and ugly, ups and downs. Looking at it now, I think me and Tek are in one of the strongest positions we’ve ever been since Dah Shinin. We’re still with the family. We’re still with Duck Down … Dru-Ha, Noah [Friedman], we still with Boot Camp Clik. And we still running the point, we’re still a special team. We’re the smoking guns of our family. And I wanna see where we can take it.”

The All is Smif-N-Wessun’s focus right now, but fans can expect some type of celebration for Dah Shinin next year.

Smif-N-Wessun’s The All drops Friday, February 22. Physical copies and other merch can be purchased at Duck Down Music’s online store.