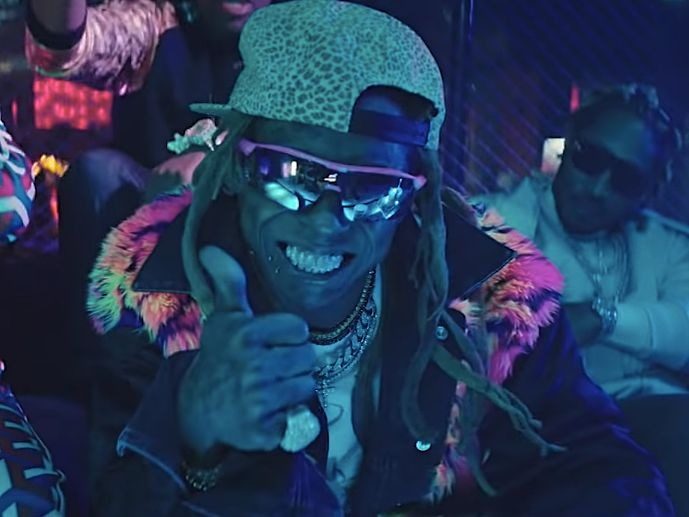 New York, NY – Lil Wayne was the musical guest on Saturday’s (November 10) episode of Saturday Night Live and he brought a few of his famous friends to liven up the party.

In addition to performing “Can’t Be Broken” with special guest Halsey and “Uproar” with Swizz Beatz, Weezy lent his talents to a colorful skit about consent called “Permission.”

The premise revolves around fictional rap duo the “Booty Kings” — played by Chris Redd and Kenan Thompson — who like to frequent the clubs for available women. They will only proceed to spit game if they have a woman’s consent.

“I’m on a mission for that ass, but first I need permission,” they rap.

While the booty-seeking duo continues their mission, special guest Future starts shuffling money into a collection jar for the Women’s Rights Fund.

Finally, Wayne comes in and spits a few bars about the topic at hand.

“Respect the ladies so I treat ya like an equal,” Wayne raps. “Got me starin’ at that booty like an eagle, yeah I see you!”

The irony isn’t lost. Several Twitter users were genuinely surprised Wayne and Future were included in the skit but considered it a sign of hope.

2018 has lil Wayne on SNL rapping about consent. We’re all getting better.

SNL had lil wayne rapping about consent and respecting women in a sketch, Future was in it and Pete Davidson was toothless. the matrix is in full glitch tonight

Wait #SNL had a parody rap song with Lil Wayne and Future about… consent? pic.twitter.com/2QKinPfe3W

No one saw any part of this coming.
Continue reading… pic.twitter.com/MsS7cKoBBa

I look forward to the day where hip-hop is really that enlightened.