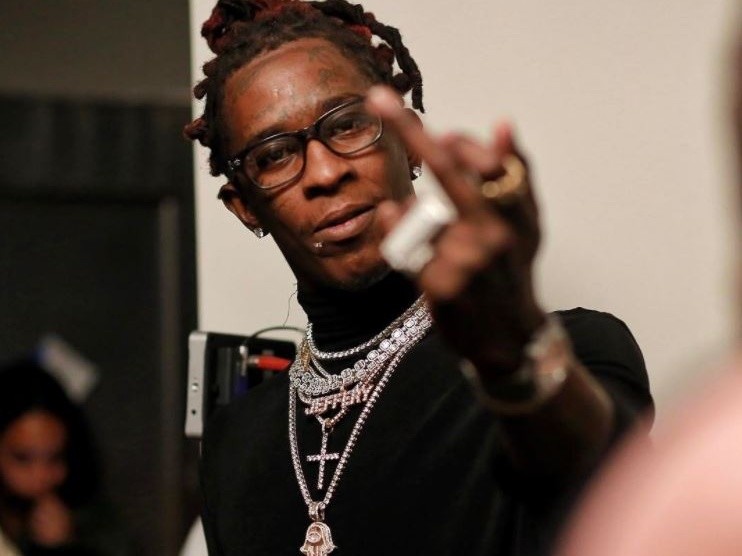 Hollywood, CA – The celebration of Young Thug’s highly-anticipated release of Slime Language and 27th birthday was supposed to be held at a booked out Dave & Buster’s Thursday (August 16) evening in Hollywood.

Before the soiree could officially kick off, Los Angeles Police Department arrested the Atlanta musician, born Jeffery Williams, on a felony gun charge, TMZ reports. He teased the private, invite-only affair on his Instagram.

As Young Thug arrived at Dave & Buster’s, police cars descended upon his Sprinter and a long line of cars that closely followed, which caused a member of his team to hit one of LAPD’s cruisers. This prompted law enforcement to perform a search.

Police found Thug and a few members of his team to have weapons in their possession.

Sources exclusively tell HipHopDX, police officers were walking around Dave & Busters with guns in hand while asking various guests in attendance questions—some were arrested on the spot. Guests inside had a hard time making an exit because the front doors were blocked and guarded by LAPD officers. Meanwhile, unaware Thug fans outside the door hoped to listen to Slime Langauge with Young Thug on his birthday.

Thugger Thugger was quickly released Friday morning (August 17) on a $35,000 bond and posted to his Instagram to let fans know he was free.

“Faster then the officers got off…,” the YSL boss captioned.

Faster then the officers got off… #SlimeLanguage lil bitch