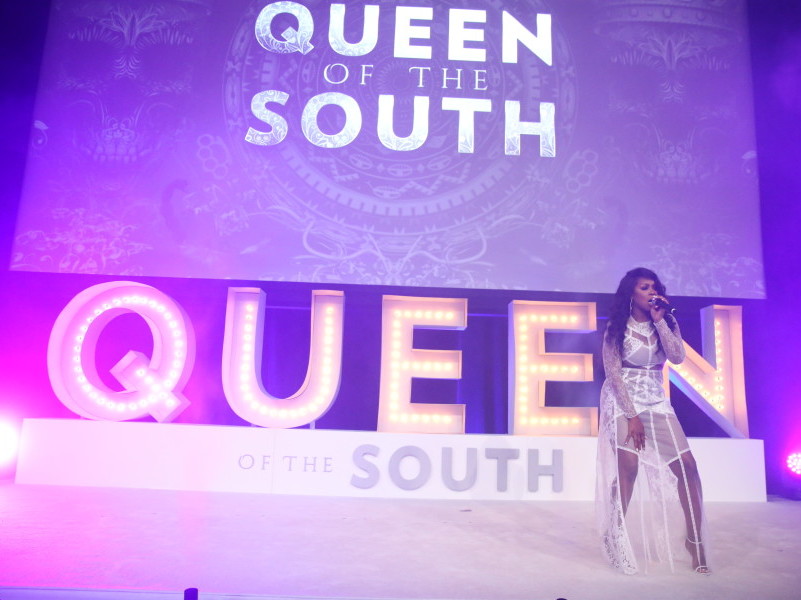 Los Angeles, CA – On Tuesday (June 19) fans of USA’s hit show Queen of the South, flooded NeueHouse on Sunset Blvd in Hollywood for a night of pampering, drinks and a first look at the upcoming season three.

Queen of the South has proved to be a success while breaking the traditional norms of the male-dominated drug cartel in Mexico. Instead, Teresa Mendoza (played by Alice Braga) has taken the drug trade by the horns and uses her logic and natural womanly instinct to outsmart her male counterparts.

Guests were asked to dress in all white and enjoyed an hour of hair, nails and makeup activations prior to the highly anticipated sneak peak of what’s next for this upcoming season. The cast participated in a panel discussion to help make sense of some of the fans’ burning questions right before Remy Ma took the stage, performing her greatest hits like “Conceited,” “Lean Back” and “All the Way Up” — which earned her and Fat Joe a Grammy nomination last year.

The Bronx-bred rapper excitedly revealed that she would be joining, Queen of the South this season and even joked about her time on set getting closer with the cast. She is set to guest star as Vee, a key member of Chicago drug mogul Devon Finch’s (Jamie Hector of The Wire fame) security detail. Her character is described to be “efficient” in combat and weaponry, courageous, deeply loyal and highly dependable. Her only other film credits stem from her appearances on Mona Scott Young’s Love and Hip Hop New York, so there is no understating how big the look is here.

The show’s executive producer, David T. Friendly gushed regarding his excitement on where the show was headed next, saying, “When we first started developing the show the idea was there’s a woman who comes to America penniless and she will rise to become one of the biggest cartel leaders in the world and I would just say keep watching.”

Will her role on Queen of the South prove to be the beginning of her transition into more acting roles? Will her role contribute to any of the main set of characters ultimate demise?

Only time will tell, until then, Remy supporters will just have to wait and see when Queen of the South returns to USA Network today, June 21 at 9 pm.