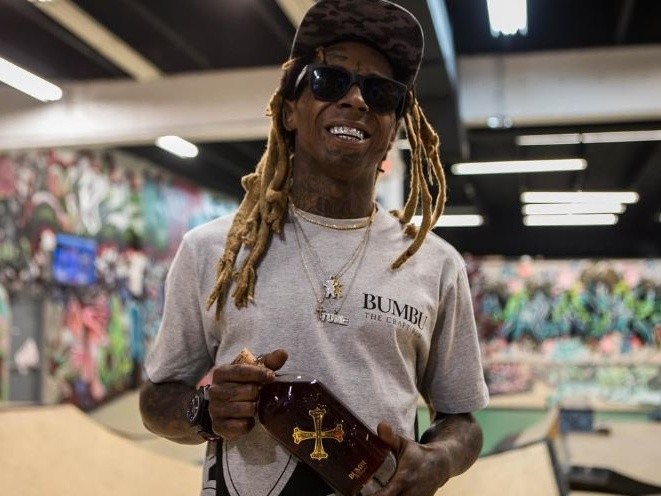 As Lil Wayne celebrates the 10-year anniversary of Tha Carter III this Sunday (June 10), Spotify is joining the rapper in celebration.

In honor of the album hitting its aluminum anniversary, Spotify has teamed up with a who’s who of rap talent to recreate the original album’s cover art.

Among the 17 artists paying homage to Weezy are Chance The Rapper, Wiz Khalifa, Tyga and Lil Uzi Vert.

“When I heard Tha Carter III, I knew Wayne was the greatest rapper alive,” Uzi said in a quote shared by Spotify.

“Wayne remade the whole Carter III after it got stolen and leaked. So it's two of them. Both versions are my favorite album lol.” – @chancetherapper #ThaCarterIIIAnniversary

“Tha Carter III selling a million first week set the bar for rappers that looked like me. It showed me what a real underground following can do. He built his fans one by one and made the whole world respect him. First rapper of our generation to make pop money without going pop.” – @yg #ThaCarterIIIAnniversary

“Wayne is one of the most influential rappers and Tha Carter III changed the game. All the production and lyrics on here are on point and this was the soundtrack to life when it came out.” – @wizkhalifa #ThaCarterIIIAnniversary

“I was around 15 when Tha Carter III dropped. That album was motivating. It was like a celebration of him making it. It was flashy and proud. No cap. When you come from nothin and get on, you appreciate things more. That’s me. I wanted that and it inspired me to reach that.  Right after the album he started breaking acts like Nicki, Drake and Tyga. It made me want to not only put myself on but put my whole team on and help them eat too. Start my own label dynasty.” – @richthekid #ThaCarterIIIAnniversary

“Tha Carter III came out when I was just a kid, but it was one of the first albums that really got me into music. The album made me feel and kind of unlocked something in me. I now realize it helped to shape me into who I am as a person and an artist today.” – @trippieredd #ThaCarterIIIAnniversary

“Tha Carter III inspired me and all my peers. Wayne’s flow is second to none. He will always be a legend to me.” – @frenchmontana #ThaCarterIIIAnniversary

“Tha Carter III definitely influenced me musically, because anything Wayne did was fire! At that point he had some of the hottest records out, so I would always write my own version to his songs. 'A Milli' was one of the first joints I made a remix to as a kid.” – @youngma #ThaCarterIIIAnniversary

“Tha Carter III taught me to come for that top spot.” – @offsetyrn #ThaCarterIIIAnniversary

“When I heard Tha Carter III, I knew Wayne was the greatest rapper alive.” – @liluzivert #ThaCarterIIIAnniversary

“Tha Carter III is one of the hardest albums ever. It changed my life in terms of paying attention to lyrics. This is the moment to me when Wayne went from 10 to 1000.” – @tydollasign #ThaCarterIIIAnniversary

“Tha Carter III was the beginning of what hip hop looks like today. I mean, look around. He's the prototype.” – @preme #ThaCarterIIIAnniversary

“After 'Lollipop' dropped, it was my mission to work with Wayne. Then I finally saw him pass by me when I was at the same studio he was at while he was still recording Tha Carter III. I said “what’s up,” he didn’t hear me. I went back to my studio and bounced a hook I had just did, told my ppl to send it to Wayne’s room. He heard me then. 'Got Money' was born and I will be forever grateful for the long friendship that followed. Wayne’s influences on the rap game are still very much apparent in today’s music and, I’m sure, for many generations in the future.” – @tpain #ThaCarterIIIAnniversary

This weekend’s anniversary comes on the heels of momentous news for Lil Wayne, who settled his lawsuit against Cash Money and Birdman. The rapper will reportedly receive well over $10 million.