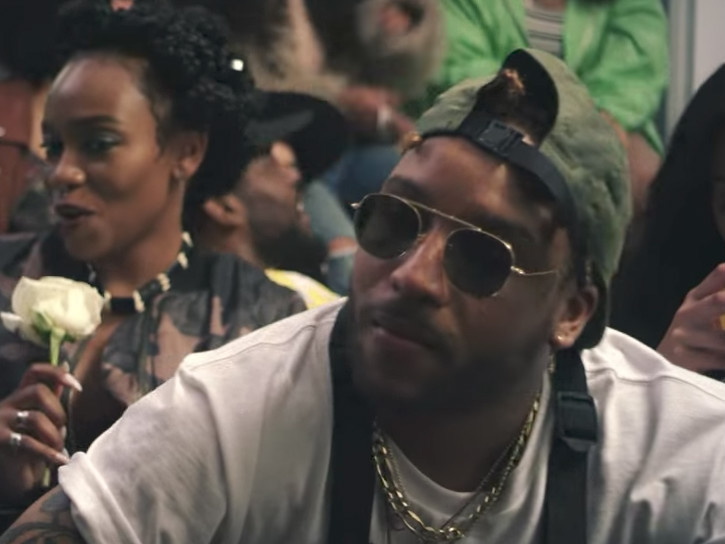 Austin, TX – It was a full house at the Revolt House at SXSW, the annual week-long music and film festival in Austin, Texas. With headliners Mike Jones, Paul Wall, and Slim Thug on the bill, the entrance was overcrowded and overpopulated. Fans were eager to get inside to see some of their favorite artists take the stage.

HipHopDX had the pleasure of catching up with R&B singer Ro James on the rooftop of Vulcan Gas Company shortly after he took the stage. Dressed in Dries Van Noten, Helmut Lang, and Balenciaga from head to toe, Ro James was clearly no stranger to the celebrity lifestyle.

Originating from Southside Jamaica Queens, New York, Ro James describes himself as “an artist, a creative, musician, an innovator, trendsetter, all those things.”

From his recent project El Dorado comes his hit single “Permission,” which earned him a Grammy nomination.

“It was great,” he explains of the song’s success. “It was my first one. I feel like it was great for people to get to know who I am. And for The Grammys to be recognized, it’s amazing. On my first album, my first single. I didn’t get to put another one out yet, so it’s a blessing.”

Although he did not take home the trophy for Best R&B Performance, he applauded the winner.

“I feel like Solange deserved the award, as well,” he says. “I deserved that shit too. I feel like Solange, she put out an amazing album. And I love ‘Cranes In The Sky.‘ I’m a huge fan of Raphael Saadiq, as well. So I’m super happy for her. I know she’s been doing it. It was just her time. And my time is another time.”

While he is still waiting for his moment, most people may not know that Ro James has been at it for over 10 years.

He explains, “It’s been a journey, for sure. A journey of anybody. . . you doing this. You get let down, you get built up, there’s people that make you promises, and they don’t make the promise. They lie to you, they take your money. . . there’s so many things. All of those things teach you how to be strong. And I feel like this journey has definitely taught me how to be strong.”

@rojamesxix caught up with @shirju at #SXSW and spoke about how @bjthechicagokid has helped him in his career ?? Head to HipHopDX.com for more!

Another R&B sensation was in attendance at Ro’s sold out show at The Roxy in Los Angeles, where he shared the story of his decade-long journey with the crowd. It turns out BJ The Chicago Kid has been a strong support to James in his career thus far. The soulful singer has had a handful of Grammy nominations himself.

“I feel like, BJ has been one of those brothers that I’ve never had, that encouraged me,” James says. “And I would encourage him, at the same time. I’ve watched his hustle, his grind, and all the issues he’s had, with just being so soulful. And how he’s persevered. And to see him be nominated several times, is such a blessing. And I’m so happy for him. So it’s like genuine. That’s my boy. I’m happy for him.”

With this new wave of R&B, including Tory Lanez, 6LACK, and Bryson Tiller, DX asked how James fits in.