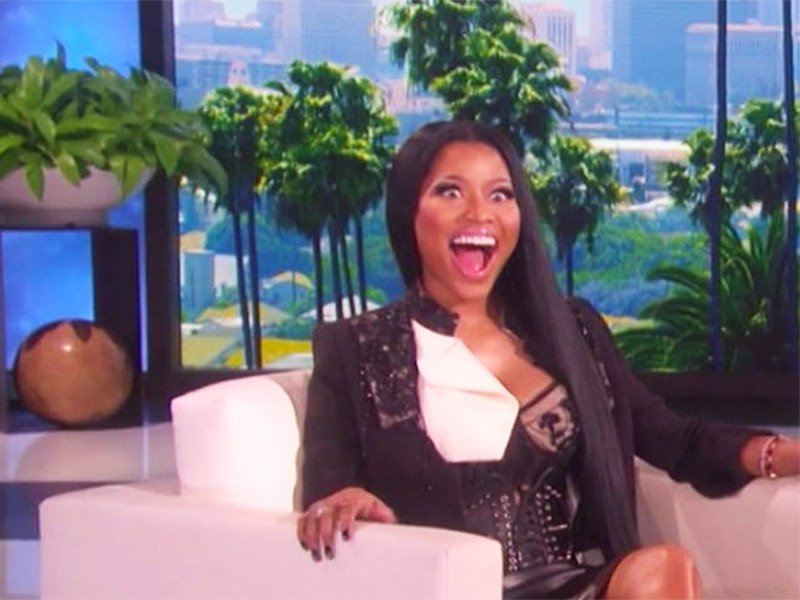 Los Angeles, CA – Nicki Minaj got put in the hot seat when she stopped by The Ellen Show on Monday (May 22) where host Ellen DeGeneres quickly dove into questions about her love life. Earlier this month, dating rumors began to swirl when the self-proclaimed Black Barbie posted a photo of her cozying up to fellow Queens MC Nas at the New York location of his Sweet Chick restaurant. DeGeneres went in for the kill the moment she saw an opportunity, which came as they were discussing Minaj’s exposed breast at a Paris fashion show.

“Does Nas like both of them the same as well?” DeGeneres asked (in reference to her breasts). Minaj was noticeably embarrassed, but handled it well.

“He’s so dope,” Minaj said. “He’s a king. Shout out to Queens, New York. I have to say that — we’re both from Queens and he is the king of Queens, and I’d like to think I’m the queen of Queens. So he’s a rap legend. Let’s just say that. I have a lot of respect for him and you know, he’s kind of cute too.”

She then admits they’ve had “sleepovers,” but claims they haven’t done the “nasty.”

“We have [had sleepovers],” she said. “I go to him. I just thought him coming to me was too forward. Let me clarify … I know people are going to think … no. We didn’t do the …”

“Because you know, I’m just chillin’ right now,” Minaj continued. “I’m celibate. I wanted to go a year without dating any man. I hate men. But I might make an exception to the rule for him because he’s so dope.”