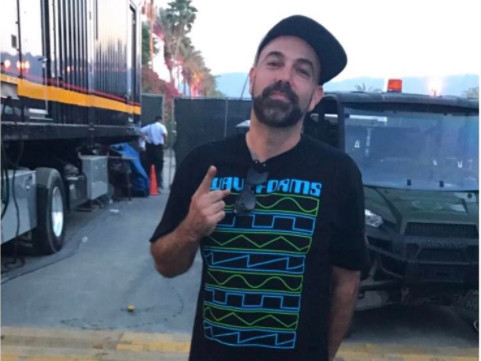 Indio, CA – Although no official reunion was announced, ,Jurassic 5 has been touring as a collective again for the last four years. In fact, the Hip Hop aficionados actually performed at Coachella in 1999, which is where DJ Nu-Mark popped up again last weekend.

While catching up with the talented turntablist at the artist compound, Nu-Mark spoke about his upcoming headlining set at The Heineken House. “I’m going to try to fit in as many genres as I can,” he said. “I’m going to stay away from one genre.”

Thanks for chopping it up with us, DJ Nu-Mark ?? #Jurassic5 #Coachella

If fans were unable to catch the DJ live, they have another chance. Nu-Mark is teaming up with Method Man on his new show, Drop The Mic.

“James Corden has a segment on his late night show called ‘Drop The Mic,’ where celebrities rhyme against each other,” he explained. “It’s hilarious. Like Kevin Hart battles someone. . . it’s really funny. They did a spin-off show on TBS, where Method Man is the host, the co-host is Hailey Baldwin, and I’m the DJ.”

The show is set to premiere in the fall.

“They’re taking the writing really funny,” he said. “It’s really funny. It’s good. I’m up there with all my toys, too. So it’s crazy. It’s gonna be insane.”

When asked about his recent “Zodiac Tracks” series, Nu-Mark made sure to explain it can be viewed visually, too.

“It’s a live video,” he said. “I put it on SoundCloud as well. It’s really about paying homage to all the great artists that influenced me. So I gather artists in specific Zodiac signs, like I just finished Aries. Did cats like Q-Tip, Chance The Rapper and a bunch of the other artists. And I mix all those artists using all vinyl in a video setting on my Facebook. Then I take it down in seven days.”

To this day, he continues to experience legal woes when it comes to the art of DJing and admits Facebook might even eliminate his page.

“They’re threatening to take my whole page down, ‘cause it’s not my material,” he said, laughing. “And record companies still don’t believe in the word ‘promotion’ I guess. I don’t know. They should know the numbers that I’m pulling. I’m just giving them sales.”

Nu-Mark also spoke on how turntablism has evolved since his time.

“I think a lot of cats are incorporating Serato now into their turntable sets, as far as turntablism, as far as doing tricks,” he said. “Whereas back then, it was purely vinyl, and containing copies of two pieces of an artist, so doubles of everything. There’s more incorporation of electronic music in turntablism today.

“There was one toy that I saw called Music Blocks that just blew me away,” he continued. “It was incredible. It’s a toy that sounds like a SP-1200. I just kind of thought that if this toy sounds that dope, then there must be a ton of other toys are incredible. I just started collecting new toys, older ones all the way from the ‘60s — all the way up. Then at one point I was like, ‘What would happen if I just filled the whole stage with toys and make a whole set out of it?’ Seven years later, I’m still touring off that kind of stuff.”