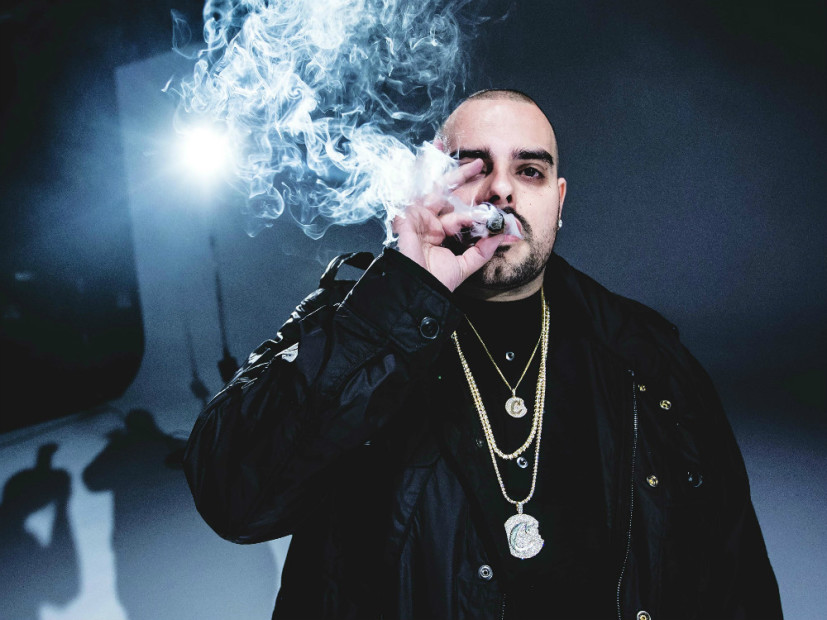 Berner has established himself as a leading expert in the marijuana industry and is ready to tell his story in the form of a feature film called Packs. The project has been in the works for about the past seven years and the Bay Area native says that now “it’s the right time” to kick the movie into gear.

“The way to explain it is like Blow meets Dead Presidents meets Belly,” Berner says in an exclusive interview with HipHopDX. “It’s an urban crime film about the rise of designer weed. When this good California weed started hitting markets like Houston, New York, Atlanta, Florida, Detroit, it changed the game. It was like how coke was back in the ‘70s and the ‘80s. So no one’s told that story right or genuine yet and a lot of shit went down with that with playing with the mail and people being killed and going to jail and just the amount of money that was made in the period of time and where it was coming from, mostly going to California.”

Berner takes the business of marijuana very seriously and explains why the current narrative of the industry is extra incentive for him to tell his story through Packs.

“Most of the weed movies that came out have been like comedies,” he shares. “Savages was like the worst ever. I remember seeing Savages in theaters and being like ‘Fuck, my dream is over. Packs will never come out.’ I went to see it and I couldn’t help but laugh like man, no one knows how this shit really is. So it’s given me a lot of motivation to get it done.”

One of the major moves that Berner made was linking with director Daniel Ragussis who was responsible for last year’s Imperium, starring Daniel Radcliffe (yes, Harry Potter). Berner says he was impressed with Ragussis’ ability to translate a true story into a drama in a similar fashion that he wants to do with Packs.

For his own star power, Berner says he was talking with Power‘s Omari Hardwick about playing one of his friends in the story. He also wants to feature a Bay Area actress to give the area some shine, another reason this movie is so near and dear to him.

“This movie to me is important because I don’t feel like anyone from the Bay Area has tapped into the culture out here yet as far as film,” he says. “The Bay is so wide open in content that I feel like we definitely have to have some Bay Area, someone that can at least portray someone from the Bay and is from the Bay and understands our culture 100 percent.”

Initially, Berner envisioned himself having a role in the movie until he realized it had a greater potential than what his acting skills could provide.

“Until recently I always envisioned myself acting in Packs until we started really writing the script and we realized how great it’s coming along, we’re like, I can’t act,” he explains. “I’m not going to jeopardize a real film to try to be in it. So it’s hard to figure who I would have play some of the story that’s me.”

Berner continues the Packs narrative through an album of the same name, although the title is basically as far as the connection goes. But for him, the timing of the album and the timing of the movie go hand in hand.

“It doesn’t really connect with the movie, but it does in a way, just where I’m at in life,” he shares. “We’ve been holding back on the title for a long time. It’s not the soundtrack for the movie, it’s not connected to the movie, but the time of life for that is right now, so it kinda happened coincidentally like I called the album Packs then we finally linked up with somebody reputable [Ragussis] as far as writer/director goes who had some good credits under his belt and then we hired him to write the movie with me alongside with me, so it’s going really well.”

In regards to new music he’s prepping for his fans, he said he’s working with Young Dolph and continuing to promote his Battle App. Also, he and Taylor Gang boss Wiz Khalifa finished their collaborative album, which Berner exclusively tells DX is called From Seed to Sale. The LP, due out on Christmas, is made up of 17 tracks and separated into parts based on the process of growing weed “breeding it, putting it together, to planting it, to growing it to selling it.”

Which brings Berner full circle as his overall mission is not to just make a movie or an album, but is to preserve the culture of the marijuana industry. He serves as a consultant for businesses as weed is slowly being legalized across the country.

“I think it’s a great thing, but it’s a good and a bad thing,” he says of the legalization process. “It’s good because I don’t wanna worry about being arrested for something that is as beautiful as marijuana. Marijuana brings people together it’s safe. I think it’s something that people should be able to use.”

Berner seeks to preserve these positive attributes of marijuana culture from industrialization and mass production.

“The big business side of things for the most part are from real estate or investment banking and they’re very, very green in the area,” he says. “They don’t know anything about it. We don’t wanna be buying a bunch of mass-produced bullshit weed. People that smoke weed like new weed. They like good weed. They like weed that is hard to grow and that’s not the best plant, it’s a little finicky in the grow room. Big businesses are gonna grow it so that it flowers fast. It’s just like anything else. Picture you go to this burger place in your town that’s the shit. But then you go to McDonalds. There’s a difference between mass-produced burgers and a home cooked burger. So with the weed, it’s going to be a lot different. So my main goal right now just as a business standpoint is to team up with some of the bigger dogs that understand that culture is something that really drives this business. Then get them to grow some of the harder weed to grow, some of the more expensive, pricey, finicky plants just to keep that good shit in rotation. We don’t want none of that bullshit.”

With so many jumping in on the marijuana craze, Berner is an OG of the industry who he knows people can trust to make sure his business is genuine and the story he will tell through Packs is from the front lines.

“I’ve seen this angle from the ground up,” he says. “I’ve definitely been in a position to see a lot of the stuff go down from the medical side to the street, underground side to now the recreational side. I’ve seen it all and seen some pretty amazing and crazy shit happen in that time. So we can tell it from all angles and from beginning to end almost I feel like. People that follow me and know who I am know what I’ve been involved with since the early 2000s and know that the kind of conscience I’m coming from is pure.”