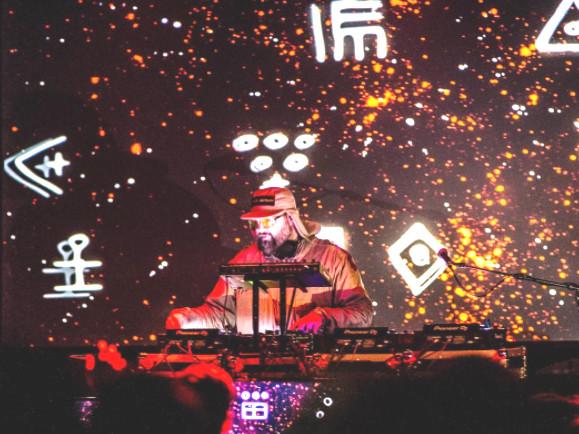 Los Angeles transplant Barclay Crenshaw only recently adopted that moniker (his actual government name). For years, the 45-year-old producer/DJ has been known as Claude VonStroke, a curious entity with a tendency for making popular house music who just happens to have his own San Francisco-based label, Dirtybird Records. Growing up in Detroit, however, he fell in love with Hip Hop and has wanted to honor that passion for decades. That time finally arrived in 2015 when he introduced Barclay Crenshaw at Dirtybird’s annual camping festival and proved his penchant for electro-influenced Hip Hop.

Behind The Track: "Respect The Source" This is a track that relied very heavily on the @redbull Studios live recording sessions that started the project. This is an homage to all the classic hip-hop tracks of the past but without any samples. You can hear the @djpremier influence right away. I debated this track making the album because it's the only one that doesn't have a super modern element but every time I play it my eyes glaze over I smile and my head nods so we good.

“I was always into Hip Hop, I just didn’t make it after 18,” Crenshaw says in an interview with HipHopDX. “Then I got really heavily into house and jungle, and it just took me a long time to get back to it, but I always wanted to do it again. I never stopped wanting to do it.”

A couple of years ago, Crenshaw took the leap and began to focus on Hip Hop-style production.

“I just decided to do a session at Red Bull and record a bunch of live instrumentation in case I was going to do it,” he laughs. “I don’t really sample, but for Hip Hop, I have to still sample, but with live music. I made all the source files and sat on them for awhile, and decided to finally do it.”

The results were the Transmission 001 mixtape and, most recently, a self-titled, alien-themed album that he released at the top of the year. The 10-track masterpiece bursts with classic boom-bap Hip Hop and electro, and guest spots by artists like The Cool Kids, The Underachievers and Mr. Carmack. Album highlight, “U Are In My System,” featuring Chuck Inglish and Sir Michael Rocks of The Cool Kids, actually happened by chance. Crenshaw, who admits he’s out of touch with the who’s who in the rap industry, enlisted the help of a trusted friend.

“I had a lot of help from this guy Will Hoops because that’s not my forte,” he says. “I’ll make the beat and know what kind of sound I want on it, but I’m not super dialed in anymore. I was in the ‘90s. This guy Will was really awesome and made these gigantic, exhaustive lists of rappers, and then I listened to all of them. The weird part about the Cool Kids track was it was an accident it was a Cool Kids track.

“I actually picked Mikey Rocks and Chuck Inglish individually, but they were on a list of six different people that could have ended up on the track,” he continues. “They didn’t do it at the same time or even in the same studio, but they’re both in the Cool Kids. That was all luck and randomness.”

Although he can’t yet announce who is booked for his October Dirtybird Records’ festival, it’s easy to take an educated guess on who might be on his wish list. As of now, only one act is confirmed, but that will change soon. In the meantime, Barclay’s focused on getting his new material out there despite not knowing exactly what he wants out of it.

“I don’t know — I want to make good music and explore other sounds instead of always making house tracks,” he says. “It’s more of a music producer project. I’m not saying [Barclay Crenshaw]’s going to be anything— I am just saying, I do like music. That’s all that matters.”