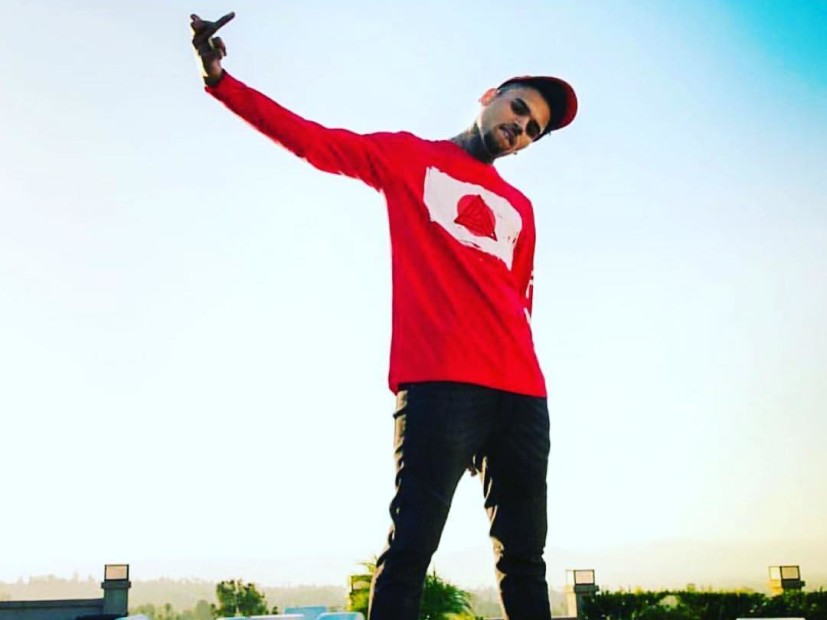 Los Angeles, CA – Chris Brown has responded to Billboard’s exposé about his alleged addiction and anger issues, dismissing the reports before showing off his collection of luxury cars.

In a clip shared by Baller Alert, the 27-year-old singer frames the report of his “downward spiral” as being an attempt to keep him down when he’s trying to do something productive with his career.

“Y’all gotta stop with this angry shit going through drugs and all this other shit,” he says. “I’m tired of reading about some shit as soon as I got something popping. As soon as I wanna promote a tour, a party, a fuckin’ album, anything, y’all bring up something.”

He also complains about the media scrutiny over his romantic relationships.

“Y’all concerned with what girl I’m talking to or what person I’m dating, or who I’m seeing … I can be seen with whoever I want to be seen with … I am not hurting out here, trust me.”

The clip ends with him showing off his parking lot of sports cars.

#ChrisBrown denies claims he has anger and drug issues

[This story has been updated. The following was originally published March 2, 2017.]

Chris Brown will quite possibly go down as one of the most talented musical artists of this generation. He can dance and write and any song he lays his vocals on seems to be a hit as with his latest Hot 100 song “Party” featuring Usher and Gucci Mane. It’s a song that’s currently hard to escape much like the demons that allegedly follow Chris and appear hard for him to shake since his attack on his ex-girlfriend Rihanna in 2009.

Friends and former employees divulge these demons in an exposé published by Billboard today (March 2).

Among them include reports of the pop star snorting coke and popping Molly followed by sipping lean (a mixture of codeine and a fruity soda), popping Xanax or smoking weed to counter the effects of the aforementioned drugs. He’s previously admitted to sipping lean and abusing Xanax following his stint in jail back in 2014, which he also went to rehab for.

The 27-year-old musician also apparently makes stalking ex-girlfriend Karrueche Tran’s social media a part of his day to keep up with who she’s with, where she’s at and what she’s doing. She’s since filed a restraining order on Brown, demanding him to stay away from her, her brother and mom. On Wednesday (March 1), her best friend Joseph Ryan La Cour followed suit, filing a restraining order of his own.

Ladies… what do you think? #chrisbrown

The exposé combs through what it’s like working with and being around Breezy. The allegations include him lashing out at his team and threatening them as he did in the case of his former manager Mike G, who he punched several times after locking himself in the room with him. Normally, these acts would happen when he’s reportedly going through withdrawal symptoms.

“He will cuss you out and say, ‘Hey, man, I’m functioning,” a current member of Brown’s crew tells Billboard. “‘I’m going to get the work out.’ And he does. But [he’s not] the first functional star who thinks they can handle those powerful drugs. I got to say with all my heart, he’s dancing with death.”

His team further admits they never know which side of Chris they will get when he wakes up in the morning. He reportedly deals with bipolar II and uses the drugs to self-medicate.

Nevertheless, his record label RCA stands behind their Grammy Award-winning artist as he readies to hit the road on The Party Tour with featured guests 50 Cent, Fabolous, O.T. Genasis and Kap G in a 33-city journey across America. He’s chosen to focus on the tour rather than fighting Soulja Boy in a boxing match.

His forthcoming album Heartbreak on a Full Moon is still being recorded, according to his label, and the project has yet to be given a release date. However, they’re gunning for a delivery that will land just in time for the summer.

The exposé also examines how drugs have affected CB in his everyday life from reportedly passing out in the bathroom for two hours during the video shoot for “The Grass Is Greener” to his security guards having to stay by his side to check his pulse to make sure he’s still alive and even calling himself the devil in a drug-fueled rage.

He’s currently free of a personal rep and management.

“You can talk to any drug addict or chemically imbalanced person, it doesn’t just go away,” a former friend of the R&B singer says. “It’s something you have to work on. You have to change your lifestyle. And he’s not doing the things he needs to do to get well, so he’s never going to be well. The kid is going to hit rock bottom.”