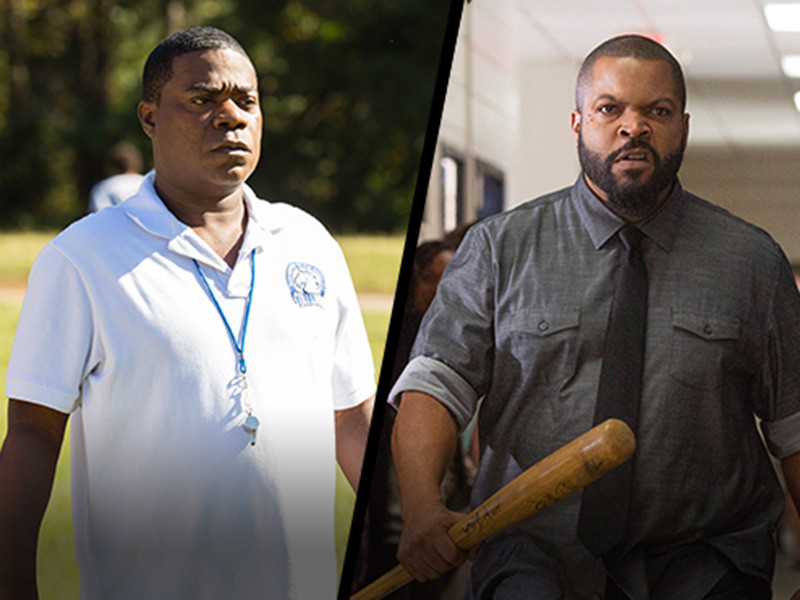 Los Angeles, CA – Starring in Fist Fight isn’t the first time Ice Cube has thrown a few punches in a movie. From the his first film appearances in Boyz in the Hood and Friday to his behind the scenes role telling N.W.A’s story in Straight Outta Compton, the West Coast icon has shown he’s ready for another battle.

“I’ve been doing fight scenes in movies,” the rapper said at the Fist Fight press conference in Los Angeles. “If you can fight Tiny Lister in a movie, you learn quickly to move out the way because he will hit your ass accidentally-on-purpose, because he got me real close to the nose one time. I just learned, learn the choreography. It keeps you from getting accidentally — black eye’s not gonna look good on film. So from doing that movie Friday, I just learned to concentrate, concentrate and get these moves right and do the dance and have fun.”

The basic plot of Fist Fight, which hits theaters today (February 17), is a clash between two teachers where Ice Cube’s character challenges that of Charlie Day’s to an after-school fight.

Director Richie Keen explained the dynamics of the relationship between the two teachers and the school system as the conflict builds throughout the 90-minute flick.

“I wanted it to be, in the back, beyond the comedy, a look at a system that was falling apart,” he explains. “We talked about that Ice Cube would be this old-school teacher who really cared about teaching. He is into the Civil War. This guy loves teaching, but as he says infamously in the movie, ‘I don’t need to be liked. I need to educate.’ If Charlie sees you on your phone, he’s the new-school teacher, he wants to be your buddy, he’s gonna come take a selfie with you. He wants to be posted on Instagram, the cool teacher. If Ice Cube catches you on the phone, you’re not getting it back.”

Little is known about the past of Ice Cube‘s menacing Mr. Strickland, and his history is something of legend in the school. O’Shea Jackson looked back to his childhood to prep for the role of the mysterious mentor.

“I remember these kind of teachers in school. Teachers that would pick you up by the collar,” he says. “I seen some of my homies get yoked up by teachers and I was like, I’m playing that guy. I’m playing the guy that takes the air out the room.”

Cube elaborated on the purpose of the movie as a comedy with somewhat of a message. But he encourages fans to not read too much into it.

“Talking to Richie, talking to Charlie, it’s a movie about two teachers fighting,” he says. “So we wanted to make sure we had a cool, underlying message in that because it’s so outrageous, it’s so unusual for teachers to scrap in that kinda way like students, so we wanted to make sure we had an underlying message talking about the school system and how two teachers deal with it. One teacher is ultra hard then one teacher is trying to appease and get along and befriend the students. It is saying a lot about our school system on things that we have to tackle, the problems that we face nowadays, but we wanted to really make sure that was the underlying message. But the overlying message is have fun, laugh, trip off these crazy characters and this crazy scenario. This is a popcorn movie if you ask me.”

You in need of some good laughs? #IceCube stars in #FistFight out February 17!

Perhaps the biggest news out of Fist Fight is that it was Tracy Morgan‘s first gig after being in an accident where a Walmart truck crashed into his limobus in June 2014. His friend, James McNair, died in the incident and Morgan was in a coma for two weeks before coming to and recovering for about a year.

But don’t call it a comeback.

“I just picked up where I left off at,” Morgan grinned to the audience. “Walmart can’t stop me.”

Allowing himself to be vulnerable, even for just a minute, the comedian reveals that he was insecure returning to the big screen.

“I was so scared the first day, man,” he admits. “‘Cause I didn’t know if I was funny or not after what I had just been through. I had a team around me, Cube is like a brother to me, so they really encouraged me and relaxed me and I just had fun after that.”

Keen repeatedly gushed how “honored” and “lucky” he was to be a part of Morgan’s first project after the accident. The filmmaker was on board to direct and produce the comedian’s FXX comedy special and admits his own concerns about Morgan’s return. The comedian plays the naive Coach Crawford who encourages kids to keep working hard, not realizing some students are mowing a picture of a penis onto the field.

“When I wanted Tracy for the role, he had not yet been on TV. He had not done SNL, he had not done the Emmys, he hadn’t been seen. So there was a real concern,” Keen says. “Is he healthy? Can he walk? Does he have brain damage? And I Skyped with Tracy. I got on a Skype call with Tracy. And within 30 seconds, Tracy’s asking me, ‘Who’s Captain Kirk’s best friend?’ Spock. ‘No, it ain’t Spock. Spock calls him “Captain” you don’t call your best friend captain. Bones says, “Dammit Jim,” so Bones is his best friend.’ I’m like, ‘He’s fine, he’s ready to go back to work.'”

The media laughed along with Keen as he reflected on Morgan’s attitude. He says he was so determined to get that energy into his film that he didn’t mind having him sit in a chair for his scenes if he had to. And once filming started, the magic happened.

“I had a real special moment with Tracy, we were on the football field, and I was gonna say ‘Action’ for the first time and I looked over and I can see Tracy had a look in his eyes, and it occurred to me, this is the first time someone’s going to say ‘Action’ since his accident,” Keen shares. “This was a guy who didn’t know if he was going to get up again, let alone be funny and get to act. So I walked over to him and I kinda put my hand on his shoulder and I said, ‘This is really special for me. I can’t believe I get to be a part of this.’ He smiled, he said, ‘I got you, you’re gonna be great.’ And he was, he was above and beyond what I could have hoped for and I think Tracy is just such a kind, gentle, thoughtful person and also crazy. And that’s what’s great. I never didn’t have a camera on Tracy while we were filming. I didn’t cross-shoot the whole movie, but I knew Tracy would say the words these fantastic writers wrote, and then I knew there would be four or five takes where he would just say things some of which made no sense and some of which would be the funniest things I’ve ever heard … I feel like he elevated the material for all of us and I’m so grateful to have been a part of his first project back.”

Morgan reflects on the moment and says it captures the camaraderie of the film and his personal triumph.