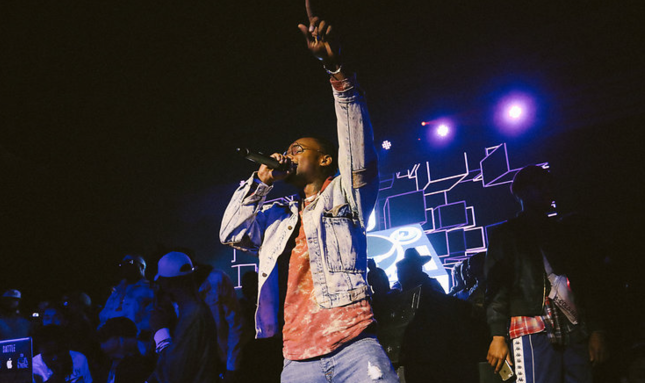 Rob $tone Gets Pissed Over A "One-Hit Wonder" Label

Los Angeles, CA – The Sunday of 2017 Martin Luther King Jr. Day weekend translated to “turn up” for most who didn’t have work in the a.m. Meanwhile, in Downtown L.A., the Globe Theatre had a line wrapped around the venue, with a crowd of people eager to enter. Tonight was Jae Murphy’s birthday celebration featuring headliners Rob $tone and MadeinTYO.

Backstage (in the basement underneath), the young San Diego MC is in the corner rolling up some bleezies with his team heavily surrounding him. While DX had hoped to do the interview right then and there, his manager revealed he needed a minute to get in his zone.

When Rob was ready, it was agreed amongst both parties to chat inside a tiny room in the corner. His homies followed suit one by one, which resulted in a giant hotbox. It was a full house, and all ears were on us.

The conversation started inquiring how Rob landed on the bill tonight. He replied, “He [Jae Murphy] just hit me up and was like, ‘Yo, I fuck with your music. We want you to come out and rock with us.’”

Rob was paired as a headliner with Madeintyo, both of which have one thing in common: a viral hit. While “Uber Everywhere” is a relevant song to this generation (who really drives anymore?), “Chill Bill” is a banger with a beat that has you demanding to know the artist. When asked about the music video reaching 61.5 million views, Rob comments, “It’s lit. It’s still unbelievable, honestly. I don’t know — I’m just riding it. It’s crazy.”

Whistle Along: Happy Birthday To Rob $tone! Follow him @youngrobstone.