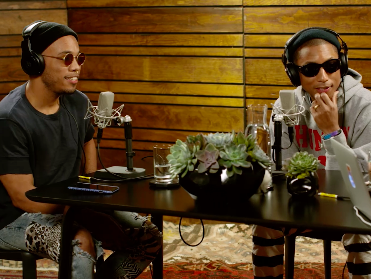 Anderson .Paak Is Sitting On Tracks With Q-Tip

After Pharrell suggested that Paak should collaborate with Q-Tip, the Oxnard artist revealed that the two were already working together.

“We got records, me and Tip,” Paak says before describing their instant musical rapport. He says there’s no specific plans for a release, but that one of them ended up as “Moving Backwards” on ATCQ’s 2016 album We got it from Here… Thank You 4 Your service.

The “Come Down” singer also described how he visualized himself winning the Grammy.

“I tried to take a little time and just see it,” he says. “It became a little more clear. I just kept it in the back of my mind.”

He also shared plans for him and Pharrell to jump in the studio in the preview for the episode, which airs in full on Sunday (January 8) at 12 p.m. PST/3 p.m. EST.

Oh, and Pharrell and Paak also end up singing an a cappella rendition of Thundercat’s “Them Changes.”

Finally got to hang wt @Pharrell and talk abt how cool @Thundercat is. @Beats1’s #OTHERtone @brokemogul. Listen now: https://t.co/W8du0TGa3K pic.twitter.com/Pc0kiP4fOj