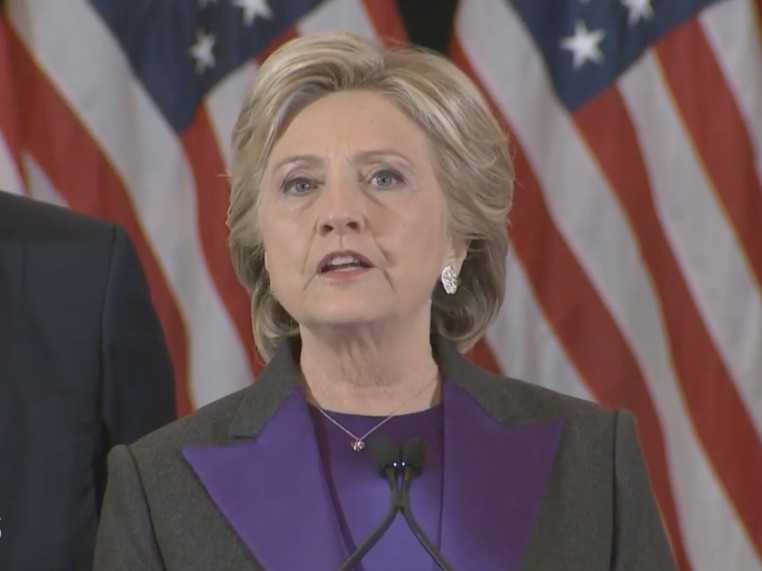 Hillary Clinton Admits "This Is Painful" During Concession Speech

Hours after Hillary Clinton phoned in to Donald Trump to concede defeat, the former Secretary of State went on to give her concession speech to a crowd of supporters.

Clinton informed those in attendance that she congratulated Trump on his win. She also went on to express her hope that the president-elect will unite the country with his work and that even though she lost, she holds her head high with what she accomplished.

“Last night, I congratulated Donald Trump,” Hillary Clinton said. “And offered to work with him on behalf of our country. I hope that he will be a successful president for all Americans. This is not the outcome we wanted or we worked so hard for. And I’m sorry that we did not win this election for the values we shared and the vision we hold for our country. But I feel pride and gratitude. That this wonderful campaign that we built together. [This] vast, diverse, creative, energized campaign. You represent the best of America. And being your candidate has been one of the greatest honors of my life.”

Despite the disappointment among those who voted against Trump, Clinton admitted that she still believes in America, and suggested that “an open mind” be kept when it concerns the new president.

“I know how disappointed you feel because I feel it too…This is painful and it will be for a very long time,” she said. “But I want you to remember this. Our campaign was never about one person or even one election. It was about the country we love. And about building an America that’s hopeful, inclusive, and big-hearted. We have seen that our nation is more deeply divided than we thought. But I still believe in America. And I always will. And if you do then we must accept this result. And then look to the future. Donald Trump is going to be our president. We owe him an open mind and the chance to lead.”

Towards the conclusion of her speech, Clinton offered thanks to both Barack and Michelle Obama, stating that “Our country owes you an enormous debt of gratitude.”

She went on to thank her family and supporters, and offered a special message to her female supporters as she aimed to become the first woman president of the United States.

“Nothing has made me prouder than to be your champion,” Clinton said.

Watch the video of Hillary Clinton’s concession speech below.