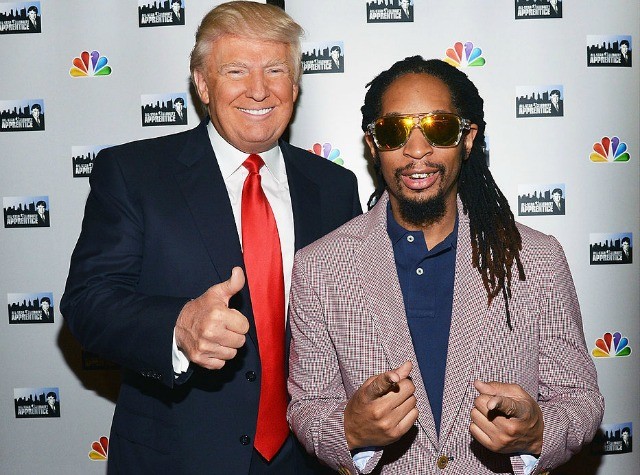 New York City, NY – As presidential candidate doubtful Donald Trump braces for the potential leaking of old Celebrity Apprentice tapes that have been reported to be even worse than audio of him “grabbing women by the pussy,” The Daily Beast discovered that the Republican nominee had once referred to Lil Jon as “Uncle Tom” on the popular NBC reality show.

The term is a derogatory moniker to any African-American who is perceived a “suck-up” to white people and further fuels the narrative that Trump, 70, is an unethical and illogical choice for United States commander-in-chief. Its origin is derived from Harriet Beecher Stowe’s 1852 novel, Uncle Tom’s Cabin.

A trio of staffers told The Daily Beast that Trump repeatedly called the King of Crunk “Uncle Tom” against their behest during the taping of a 2013 Celebrity Apprentice episode. The Grammy Award-winner producer dressed up Uncle Sam during a competition to sell hair products alongside actor Stephen Baldwin (whose famous older brother, Alec, is currently spoofing Trump for Saturday Night Live‘s political coverage), Dennis Rodman and Omarosa Manigault, who currently works as Trump’s director of African-American outreach for his campaign, among others.

“We kept trying to explain to [Trump] that that’s not a word you can use, that it’s offensive,” one of the Celebrity Apprentice employees told The Daily Beast. “One of the executive producers had to call him up directly to [plead with] him not to say it, and Trump was like, ‘No, that’s a saying, it’s Uncle Tom.’ There are several takes in the footage of the dailies that has him trying to figure out the difference between ‘Uncle Tom’ and Uncle Sam. He just couldn’t grasp that it was offensive… When [Trump] decides he wants to do something, that’s his way.”

Arsenio Hall, who was serving as a guest star for the episode, also heard Trump say the phrase and became so appalled, Spalding ball, baldin’ Donald Trump, takin’ dollars from y’all.

According to Lil Jon himself, it wasn’t until he and several other cast members told Trump that saying “Uncle Tom” was a big no-no did he become enlightened and ceased and desisted.

Jon, 45, who just released the video to his new single, “Take It Off” with Yandel and Becky G, took to his Twitter to explain how it went down from his point-of-view writing, “When this ‘Uncle Tom’ incident happened on ‘Celebrity Apprentice’ in the boardroom several of my castmates and I addressed Mr. Trump immediately when we heard the comment.”

“I can’t say if he knew what he was actually saying or not, but he did stop using that term once we explained it’s offensiveness,” his social media PSA continued.

Despite clarifying things for Trump’s ignorance, Lil Jon was pretty transparent he wasn’t down with his potential presidency.

“I also want to be clear that I don’t agree with many of the statements Mr. Trump has said during his current run for president,” he concluded.

Anti-Trump and/or Hillary Clinton supporters who are eager to see The Donald take a further nosedive from the purported Celebrity Apprentice tapes (where he allegedly uses the n-word) will have to hang tight for a bit. Series creator Mark Burnett told TIME that a legality was preventing the release of any said audio.

“Despite reports to the contrary, Mark Burnett does not have the ability nor the right to release footage or other material from The Apprentice,” MGM and Burnett’s joint statement read. “Various contractual and legal requirements also restrict MGM’s ability to release such material. The recent claims that Mark Burnett has threatened anyone with litigation if they were to leak such material are completely and unequivocally false. To be clear, as previously reported in the press, which Mark Burnett has confirmed, he has consistently supported Democratic campaigns.”

Trump has recently claimed that the “media” was “rigging the election” in light of several of his past transgressions, which reached its zenith on October 7, 2016 when The Washington Post released the aforementioned audio of him telling Billy Bush that he could grab women “by the pussy” and get away with it during a 2005 taping of Access Hollywood.