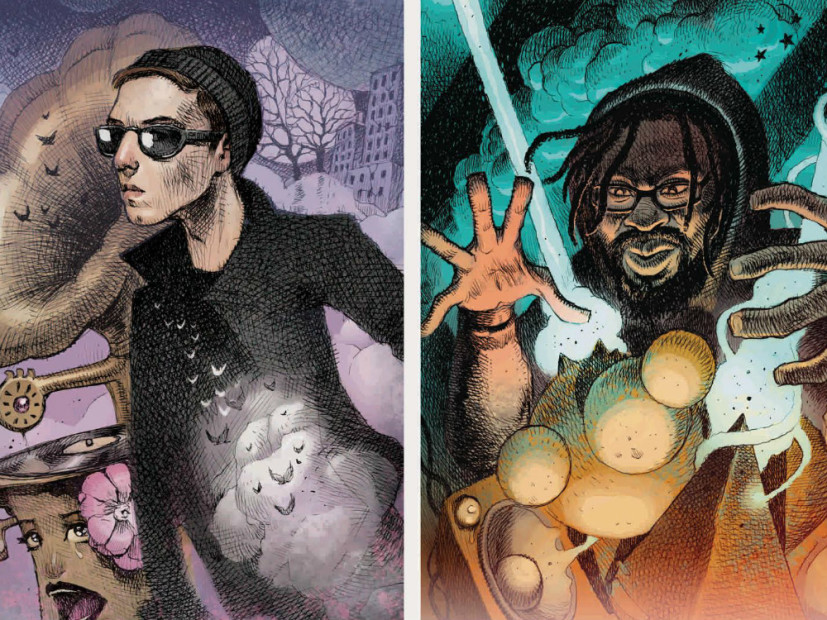 In another smooth blending of styles, Mr. Lif and noted producer L’Orange unite for The Life & Death of Scenery album. The 11-track effort paints the picture of a dystopian future where music is banned and citizens are required to attend government-sanctioned events.

This is the duo’s third collaboration after they previously delivered the singles “The Lost Nova” and “Twenty Fifty Three.” Their first LP is presented by Adult Swim and released by Mello Music Group. Although the partnership seems natural after listening to their work, Mr. Lif explains that their creative minds didn’t mesh at first.

“Due to the fact that L’Orange and I are both very conceptually driven artists who are used to following our own individual visions, the process of us figuring out how to work together didn’t come to us easily,” he says in an exclusive interview with HipHopDX. “Some of my earlier works such as the Emergency Rations EP and the I Phantom LP are very telling as to how my creative brain works. I think about albums as entire visions and my verses in that context are usually pointed at achieving a particular set of goals within the scope of a storyline. L’Orange and I eventually realized what we had to do was just give each other time alone with the project. We had our conceptual conversations, but when it came down to it, sometimes the instrumentals spoke different words to me than what we covered in our conversations. The reason working with L’Orange has been enjoyable for me is because it pulled me out of my comfort zone on various occasions. The process challenged me. The best part about it is that when all the smoke cleared, we both stepped back and realized we made this project that we’re both remarkably proud of.”

The album is another eerie vision of a possible future, rife with dystopian imagery. Both explain their take on how The Life & Death of Scenery paints its picture.

“My projects have a running storyline that helps me navigate my own ideas, so this story is an extension of that,” L’Orange says. “To me, this concept was a funny idea about how the world could recover. I viewed it less as a condemnation of society or values and more of a glance at the absurdity of attempting to ban, or even label, art.”

The new album is out today!

Mr. Lif has a different perspective on the theme of the album and cites people like Nestle chairman Peter Brabeck-Letmathe, who created controversy over his thoughts on water. Rather than an entertaining fantasy, the MC believes a world similar to the one portrayed in The Life & Death of Scenery is a potential reality.

“With the alarming exponential financial growth of top level execs at major corporations and the goal seemingly being to leave less and less financial resources available for the average citizen, it’s easy for me to flash back (and possibly forward) to the film Total Recall (Schwarzenegger version) where you’ve got the working class living in a dome and paying for air,” he says. “Don’t worry, though, water will go first.”

One sign of a degrading culture is the devaluation of art. Book banning is an ongoing phenomenon that the world faced from Ancient China burning Confucian writings to Nazi Germany enlisting similar practices to reinforce its ideology.

On the project, Mr. Lif and L’Orange imagine “A World Without Music” where everything, even the trees and nighttime, are affected by the absence. Again, the two artists have differing visions for how the song applies to society today.

“I only see art being stifled by assimilating cultures or removing the opportunities for people to have safe spaces to work,” L’Orange says. I don’t see the progression of society moving towards an art-less society, but I do see the loss of cultural heritage as a close example.”

Mr. Lif says that music is indeed being quieted by forces at work in the industry’s landscape.

“I think culture is being stifled today (specifically Hip Hop music culture as I see it) by several systems that essentially allow only a very small select group of artists to receive the bulk of the airplay on commercial radio stations,” he says. “Combine this with the fact that new platforms for consuming music are skirting their responsibility to fairly pay artists of all sizes (indie & major) for the roles they play on said services, combine that with record stores going out of business and it starts to feel like a world without music to me.”

In the middle of all the decline in the music industry, Mr. Lif notes that the climate allows for artists who are taking initiative to keep music alive to be successful.

“This is all running alongside the incredible resilience of DIY musicians who are determined to make their dreams happen every day,” he adds. “It’s an interesting era.”

Another track that could be considered weighty is the Chester Watson-assisted “Antique Gold.” L’Orange says that the Florida rapper came up with the concept and the title was even considered for the title of the album.

“It perfectly embodied the idea of a lost treasure — something that occurs naturally but we could easily forget if we stopped assigning value to it,” he says, noting that the track might be his favorite song on the album because the sound he created made him say, “Yes, this is how I want this project to sound. This is what Lif and I sound like together on Adult Swim.”

Mr. Lif says that the chains of gold portrayed in the song, and prized by many today, mirror the chains of slavery that held African-Americans captive. He continues that perhaps we are not as progressed as we like to say we are.

“‘Antique Gold’ is essentially a slave narrative from my point of view,” he says. “Fancy pieces of gold dangling around one’s neck can easily be identified as a symbol of status or accomplishment when really it’s an overt participation in an ostentatious level of materialism that could be construed as indicating low societal awareness. My character has his gold chain tucked because he’s embarrassed to be an active participant in the rat race.”

Both artists are continuing to work on music as the world keeps spinning and L’Orange is happy with this contribution to people’s fantasies about the end of the world.

“I really adore the fact that people are so attached to life that we can’t imagine it could continue without us,” he says. “It’s a more loving thought than it seems.”

View L’Orange and Mr. Lif’s The Life & Death of Scenery album cover art and tracklist below and stream the project above.