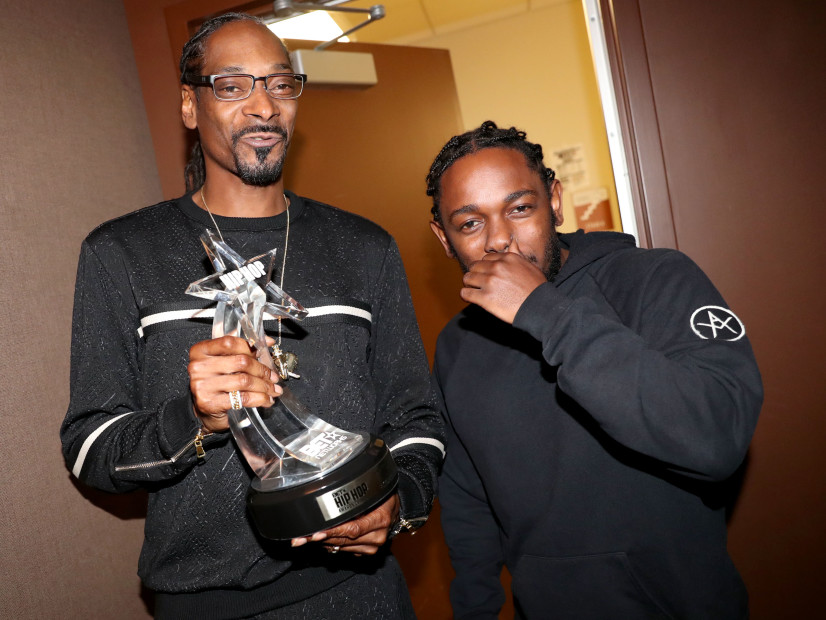 Atlanta, GA – Snoop Dogg was honored at the 2016 BET Hip-Hop Awards with the “I Am Hip Hop” Award, which was taped Saturday (September 17) in Atlanta.

Kendrick Lamar presented his Uncle Snoop with the honor in front of a packed crowd at the Cobb Energy Performing Centre and gave praise to one the rap legends who helped shape his attitude and pave the way for artists like himself, MSN reports.

“He mastered the game through tests and challenges that earned him the respect of a college professor, except his game came from the streets,” the Compton-bred rapper says. “He put (me) on game, so I would avoid the same pitfalls…Snoop Dogg was the god, and continues to be so.”

Dr. Dre and Pharrell Williams also paid their respects to the Dogg Father during the 11th annual ceremony. Snoop said it felt “amazing” to be honored by BET.

During his acceptance speech, Snoop took the time to share some wisdom with young, up and coming musicians and Hip Hop talent looking for their big break. He encourages them to continue to push the envelope and embrace their creativity.

“To all the young rappers in the game, a lot of people don’t understand you,” Snoop says. “Y’all are misunderstood. I was misunderstood at the beginning. So you got to keep pushing, be original and diverse. Hip Hop was created many years ago and it’s taken people so many places. You have to be who you are.”

“He means so much to Hip Hop,” the A-Town hero, Jeezy said. “There are so many who look up to him. He paved a way for so many, and that’s why everybody knows him as Uncle Snoop.”

T.I., Gucci Mane and DJ Khaled were among those who performed on this year’s Hip Hop Awards stage with Lil Wayne and Kevin Hart hopping on BET’s Cypher freestyles.

Lamar nabbed an award for Lyricist of the Year while Fat Joe and Remy Ma won Track of the Year award for their wildly popular song “All the Way Up.” DJ Khaled rightfully took home The Hustler of the Year Award and Best New Hip-Hop Artist went to Chance the Rapper.