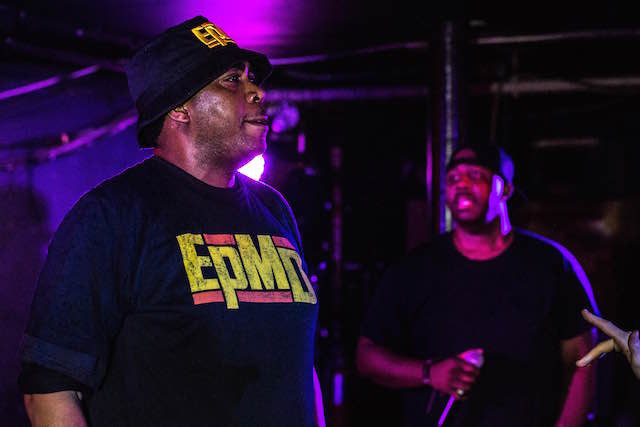 Cambridge, MA – Whether you know it or not, Jay Z’s “I’m not a businessman, I’m a business, man” mantra descends from the lineage EPMD started, dating back to the late 1980s. The Brentwood, Long Island, New York “funk lords” formed their group 30 years ago and released their groundbreaking debut album Strictly Business in 1988, and was vital to the art of sampling in rap. The album boasted four singles “You Gots to Chill,” “I’m Housin,” “It’s My Thing,” and the title track and peaked at No. 1 on Billboard’s Top R&B/Hip Hop chart.

Since its release, a lengthy list of iconic rap and R&B artists spanning the map such as Beastie Boys, Cypress Hill, Jurassic 5, The Notorious B.I.G., Nas, Snoop Dogg, Method Man & Redman, Souls Of Mischief, Beanie Siegel, Gang Starr, Warren G, Kanye West, Estelle, Mario Winans, Faith Evans, Ne-Yo, and even legendary rock band Rage Against The Machine have either sampled or covered EPMD’s music. But the B-sides of the singles from Strictly Business single still resonate today. The most current example of EPMD’s impact can be pointed to Drake’s loosie, “4 P.M. in Calabasas” fresh off the heels of his chart-dominating, multi-platinum album Views, which samples “You’re a Customer” from Strictly Business. Also, Puff Daddy revealed in a 2014 GQ interview about the history of Bad Boy Records that his first opportunity to produce a record was interpolating the instrumental to “You’re a Customer” for the remix of Jodeci’s 1991 smash single “Come and Talk To Me,” which became the prototype for the Hip Hop soul during the 1990s.

The list goes on, and non-believers can check the stats about EPMD’s indelible mark for who has used “You’re a Customer” and the countless other samples from Strictly Business. After Leedz Edutainment held the final concert of EPMD’s 30th anniversary tour this past Saturday, “The Green Eyed Bandit” Erick Sermon and “Mic Doc” Parrish Smith spoke with HipHopDX about the impact of their debut LP, and why “You’re a Customer” has reverberated through four decades of Hip Hop music.

HipHopDX: It’s amazing that almost 30 years later, your song that starts with “Knick-knack paddy wack, give a dog a bone” would longtail so much for rap and Hip Hop soul music tremendously. But how do you feel where rap is today since you emerged in the late 1980s?

Erick Sermon: New rap is making kids dumber. And I’m not like the mad rapper because we got money.

Parrish Smith: That’s been a problem: stuff that’s not Hip Hop is being tagged “Hip Hop.” When we came in, the whole thing was to sound different from everyone. Rakim didn’t sound like Kane. Kane didn’t sound like Slick. Slick didn’t sound like Doug E. [Fresh]. EPMD didn’t sound like Redman. Redman didn’t sound like Das EFX, and then the list goes on. So for Hip Hop to got through all of those changes, once it comes back around, most artists when they want that impact and get that common ground from Hip Hop, ‘You’re a Customer’ is the track. You gotta go through the whole history of artists who have used that track. Not just on the R&B side but also to Hip Hop. So you gotta start from our generation from ‘87 to ‘88, and we’re still talking about it in 2016.

“I tried to make the right choices with the world watching/Mike never tried to rap like Pac/Pac never tried to sing like Mike/Those my dad’s words to me/When I asked him how to make it in life” — Drake from “4pm in Calabasas.”

DX: Drake raps over the same beat to “You’re a Customer” on his recent “4 P.M. in Calabasas” single, but the BPM is faster than the original with a keyboard melody. What’s your take on that?

Erick Sermon: (Listens to “4 P.M. In Calabasas” for the first time) Wow! Yo, P, you were right! He did use it. I never heard this until now. That’s dope.

DX: Numerous artists have paid homage to your work. Have you ever had to deal with chasing down artists for proper credit for sampling your work, or has it usually worked out smoothly business-wise?

Parrish Smith: They get in contact with us, and we work it out with them. But it also works for us because it keeps us relevant.

DX: Which album is your personal favorite, and where does Strictly Business rank in your catalog?

Parrish Smith: I would say Strictly Business because there’s no impact like your first one. You’re coming from the real world, you want to get put on, you want to make it happen. So it’s Strictly Business. 10 songs, look at the hits. “You Gots to Chill,” “I’m Housin,” “It’s My Thing,” and “Strictly Business.” So there’s other things. It’s never like the first one. And then to get blessed when we were asked to come on tour with Run-DMC, DJ Jazzy Jeff and the Fresh Prince, Public Enemy, so that’s why that album is our best.