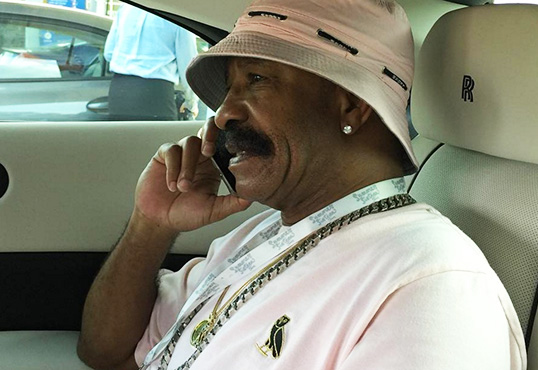 The father of superstar rapper Drake and the son of superstar music mogul Jimmy Iovine have teamed up to make … something.

Dennis Graham shared a preview clip of his new song, called “Kinda Crazy,” via TMZ. The 60-something-year-old teamed up with producer Jamie Iovine for the track, which is apparently the launch of what will eventually be a full album.

There’s a lot going on in the 35-second clip. The mustachioed musician wears an eggshell-white suit and two OVO owl chains while sitting on a silver throne. A lit candlestick lights the room, which is slowly filling with smoke or somehow resting on a cloud. Cut to a blonde woman walking through a hallway. Is she walking toward the throne room? She could be. Or maybe she’s walking to meet Graham at the fancy restaurant we see him at in the next scene. He seems to be the third wheel on a date with a younger white couple so maybe she’ll be joining them for dinner.

Really it’s too early to speculate on why any of this is happening, but stay tuned for the full video for the mystery to be revealed, or something.

“It’s kinda crazy, but I feel you underneath my skin. The first glance, I think, it’s where my obsession began,” the elder Graham croons.

This isn’t the first time Graham has dabbled in music. He appeared in the video for his son’s “Worst Behavior” single in 2013 and reportedly played drums for Jerry Lee Lewis in his younger days. He’s also the brother of Larry Graham, who is a former member of Sly & The Family Stone and was sampled on Kanye West’s “No Parties in L.A.” Another relative in the music industry is Teenie Hodges, who was a regular collaborator of soul singer Al Green.

Dennis Graham has become something of an Instagram star (179 thousand followers and counting) because of his outgoing personality and famous son.

Here are some pics from Instagram from the people involved in making the track.

My Brother right here believed in me @jamieiovine and it's Kinda Crazy http://m.tmz.com/#article/2016/08/10/dennis-graham-kinda-crazy-single/ thank you Jamie@applemusic

The celebrity site says that Drake approves of the track, but he has yet to promote the project on his social feeds. His most recent IG clip does feature his father … being told to “GO HOME” from wherever they’re all partying.

When you and your brother can't get your dad to stop living so that you and him can start your lives as grown men. @callhimrenny

And obvs we love @drake like the rest of the ?. @therealdennisg couldn'tve been more of a gentleman. Thank U fellas pic.twitter.com/HWjuNjXC8o

Check out the full song here.