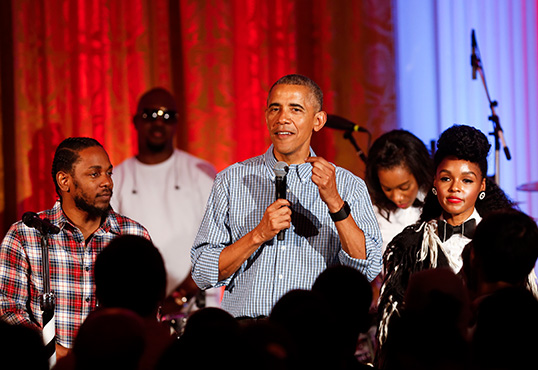 Washington, DC – As America celebrated its 240th birthday yesterday, U.S. President Barack Obama marked the anniversary and the 18th birthday of his daughter Malia with a July 4th concert at the White House. The featured performers were Kendrick Lamar and Janelle Monae.

The event, attended by military vets and their families, featured a set from Kendrick that included “Money Trees,” “Swimming Pools,” “Bitch, Don’t Kill My Vibe,” “Poetic Justice,” “A.D.H.D.” and “Alright.”

The set was heavily censored, with Kendrick playing radio edit versions of his songs, skipping all swear words as well as references to guns and alcohol.

Barack Obama got into the groove a bit too, hoarsely leading the room with a rendition of “Happy Birthday” for his oldest daughter.

Obama spoke highly of his two musical guests. “These two, I’ve gotten a chance to know, and they are both amazing artists and talented and popular and doing great things, but they’re also very conscious about their responsibilities and obligations. And they put in a lot of time and effort on behalf of a lot of causes that are important. We’re really proud of them for that,” he said.

Both Kendrick and Janelle Monae have visited the White House before. Lamar was a guest last October when he discussed social issues with the president. “I sat down with President Barack Obama and shared the same views, topics concerning the inner cities, the problem, the solutions and furthermore embracing the youth,” he said in a video released in January.

Janelle Monae was there in May when she attended a state dinner.

Thankful to be in the presence of The Best 1st Family to ever do IT. #michelleobama #barackobama #nordicstatedinner #whitehouse #wondalandrecords