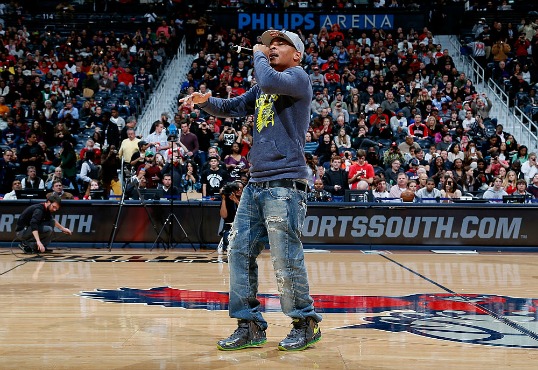 Atlanta, GA – Now that the real Gucci Mane is home, it wouldn’t be that much of a stretch to see him visible — performing even — at an Atlanta Hawks game.

Team CEO Steve Koonin is looking to repair the damage from 2014 when former owner Bruce Levenson and GM Danny Ferry both had near-Donald Sterling moments in the aftermath of leaked emails that painted the dominant black population as a deterrent for low season ticket holders and white families and comments of Luol Deng’s African descent.

And Koonin is using the Hip Hop resources at his disposal without hesitation.

Koonin, understanding the city’s geographic and rich lineage within Hip Hop culture, is embracing whatever color lines are already put into play and seeing the bigger picture.

“He didn’t understand the marketplace,” Koonin tells Robby Kalland for CBS Sports of Leverson’s thought process. “The biggest mistake anyone can make is to make decisions without having the facts. And the facts of the matter are, Atlanta, Georgia, is 56 percent African-American. We’re going to have a bigger than normal average opportunity with African-Americans, so embrace it! Love it! “$1.7 trillion in spending power from the Atlanta market from African-American consumers. I’m open for business!”

Being open for business also means utilizing the plethora of local Hip Hop artists who just happen to be superstars across the globe. Since the dawn of Outkast, Atlanta has been the origin of many a rap legend and viable one-hit wonder. Any businessman who rebuffed such an opportunity to align with such acts probably doesn’t like money as much as they say they do. Since Koonin took the organization’s reigns in April 2014, 2 Chainz, Big Grams Ludacris, Rich Homie Quan, CeeLo Green and Silento have all performed at the Philips Arena as part of a concert series.

“We are blessed sitting in the cradle of southern hip-hop, and everyone who performs is a hometown hero,” Koonin says. “It’s not like we’re buying talent and flying them here. These guys are authentic and true to Atlanta.”

One of those hometown heroes also includes T.I., who has been performing and sitting courtside at Hawks’ games for years and willingly kicked off the concert series in order to regain the people’s trust in their local ballclub.

“T.I. ran towards us instead of away,” Koonin admitted. “The trepidation was on my side, and T.I. ran towards us and then he and I made that unique commercial. That was a real important night, because opening night after having the situation that we did with the insensitive remarks, we didn’t know if the audience was coming back. But we felt that with T.I.’s endorsement it said, ‘Hey guys, it’s cool.’ It’s cool to be a Hawks fan. And then it took off.

“He is somebody I will never forget and I will always be thankful for. I think T.I. understands redemption. He’s had obstacles in his life he’s had to overcome, and I think he was willing to forgive and to help. I think that changed a lot of things around here. I think we’ll look back 10 years from now and say ‘that guy should have a banner hung here.’ That was a big night.”

The Hawks recently added another homegrown talent — 8× NBA All-Star Dwight Howard — into the fold as he agreed to a three-year, $70.5 million deal with all the money guaranteed with no option.

While the verdict is still out on Howard’s legacy in Hawks’ uniform, the added boost in celebrity will surely increase to fans’ interest next season, regardless of their skin color.