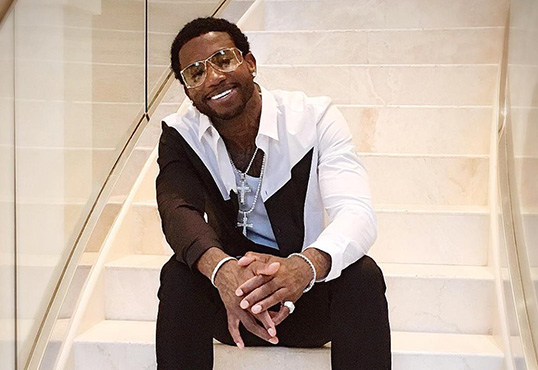 Gucci Mane Is (Probably) Not A Clone

Between rigging the NBA Finals and orchestrating every catastrophe that ever happened, the Illuminati have been busy lately. But, according to the Internet, the mysterious group that supposedly pulls the strings of society still had time to replace Gucci Mane with a replica.

Rumors of Gucci 2.0 (assuming this is only the second version … details on that remain hazy) popped up after the Atlanta rapper emerged from his two-year prison bid looking like a graduate of the Captain America recruiting program.

The difference was remarkable. He was fit, clean and wearing a shirt some of the time.

A report from a fake-news satire site also got some traction on social media, and even included a made-up quote from Lil Boosie (who now goes by the name Boosie Badazz), saying “that ain’t the real Gucci, we both sitting in the studio and he seemed lost and after his show at Mansion he called me Herman.”

For the record, Boosie’s real name is not Herman. It’s Torrence Hatch.

Out of all the important people in this world, the government wanted to clone Gucci Mane

lmfao bro gucci being a clone is easily the most headass thing of the year.

If the world was gonna clone someone WHY WOULD THE GOVERNMENT PICK GUCCI MANE? Lmaooooooooo

Jus cause Gucci got out and matured y'all tryna say its a clone ? let mfs live they life

So bc Gucci stuck with his girl, started eating healthy and wears a shirt, he's a clone? ?? society really messed y'all heads up ??????

Whoever think Gucci has a clone I got pounds of loud going for $1,100, send me your money first.

WE THINK GUCCI MANE IS HOME, BUT THE CIA SECRETLY RELEASED A CLONE THAT SPEAKS PROPER ENGLISH ???? #blackplottwist pic.twitter.com/5C3rO996mc

The main problem with that piece of evidence being that the tattoo is actually still there. DJ Akademiks posted a recent photo, adding that Guwop did have some laser removal work done on it, which caused it to fade.

ICE CREAM TAT FOUND ON #guccimane for those saying it's been missing. He did do laser removal a few times so it's faded but still there

Gucci took time out of a photo shoot Tuesday (June 21) to address the chatter, grinning as he stated: “I will neither support or deny those accusations.”

Check out the Snapchat clip, via DJ Akademiks.

HAS #GUCCIMANE BEEN CLONED?? U BE THE JUDGE HERE IS HIS ANSWER