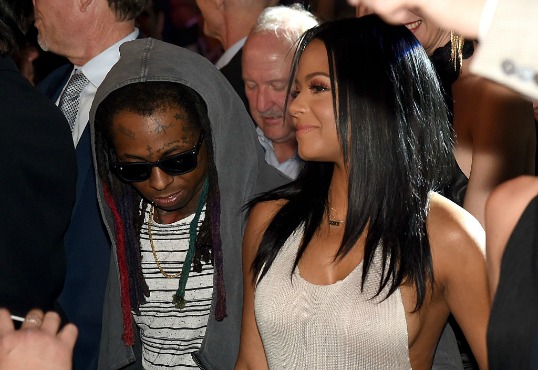 Lil Wayne Hints That He May Still Be With Christina Milian

Christina Milian’s relationship with Lil Wayne was the underlying selling point for her E! reality show Christina Milian Turned Up and headlines were made when the season two ended revealed they had broken up after she discovered he kept a few side chicks in the chamber.

Recently Weezy dropped a subtle bomb that he may have gotten back into the R&B singer’s good graces. On his buzz-inducing remix to Drake’s Views single “Hype,” Wayne spits “You see my team is right next to me/You don’t see Tina right next to me/I thank her for takin’ my breath from me/But the second me gon’ be the better me.”

The lyrics were a play off of Drake’s “don’t you see Riri right next to me line” but also comes off as an apology of sorts.

During an interview with Hot 97 that aired earlier this month, Milian, 34, alluded to the fact that she didn’t totally erase Wayne’s contact from her phone.

“I’m not gonna count that out,” she told Old Man Ebro and Laura Stylez regarding the hopes of a romantic reconciliation. “I won’t count that out. There’s a possibility that could happen. You never know.”

She also revealed how Wayne manned up and did the respectable thing and spoke with GRAMMYs Award-winner The-Dream prior to entering the tangled degree of separation they were about to be webbed in. Dream was previously married to Nivea who eventually left to return to Wayne and he eventually married Milian, who would begin to date Wayne after their divorce in 2010.

“I loved the shit outta Wayne. … I still love the time that I spent with him. … But yeah, I was like ‘Maybe I should have checked out his history’. I thought maybe it was different just because it felt different and we really were completely in it. He even — spoke to Dream like when we first started dating because he knows we have children and obviously the whole Nivea situation….I thought that, even that was like a manly thing that kinda made our relationship and our situation I felt a little different.”

Watch her full interview down below. The “Hype (Remix)” can be streamed here.