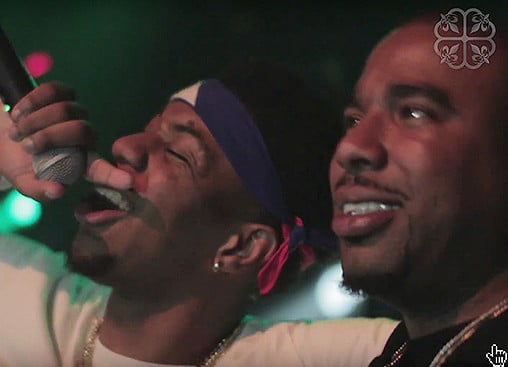 N.O.R.E. Goes Crazy For Montreal Rapper KGoon, Says He Wants To Get Him Signed

Montreal, Canada – In his latest video, Montreal rapper KGoon says he needs to get “100 Bandz.” He may have taken a step towards that goal after impressing N.O.R.E. at a show in Montreal, Canada on May 17.

sak pasé @therealnoreaga @kgoonpaperboyz ?????? #100bandz when N.O.R.E. brings u up on stage to perform your song in the middle of his set.. like 5 times in a row ??? #goodthingsarecoming

“Oh man shout out to big OG N.O.R.E. man, he made me perform that song I think it was five times. Real ‘ish. It was about five times. I was out of breath but I could’ve done it one more time … maybe.” KGoon told HipHopDX over the phone from Montreal.

“It was crazy. I’ve never experienced something like that,” the rapper from St. Henri’s Little Burgundy neighborhood explained. “It’s the first time I’ve even seen a crowd go crazy like that with my own eyes and for one of my songs. On the third or the fourth time I performed it everyone knew the words. On the fifth time I didn’t even have to sing anymore. I just gave the microphone to the crowd and everyone just started to sing.”

N.O.R.E. was clearly impressed. “I’m gonna bring this nigga out to America and make this nigga a star,” he told the crowd in a clip captured by Montreality.

The video captures the high-energy performance, and N.O.R.E.’s enthusiastic reaction to it. “The one thing I never did in my career was take somebody from Montreal and make them a star in the world. I’m bringing a badmon ‘pon America. I had no idea the new artist I was gonna wanna put on is from Montreal until 10 minutes ago. He played me this song in the back, I liked his look, I liked his energy, but I said ‘Listen I wanna see how you do on stage’ and tonight you motherfuckas got that motherfucka signed,” he told the crowd.

It would be perfect timing too, since the 20-year-old’s birthday is coming up and he’ll soon be legal to drink in the U.S. KGoon said he’s happy with the look N.O.R.E. gave him, regardless of where it goes.

“He’s a real nigga. That’s everything to start,” he said. “When someone’s real they keep their words. I’m not even worried ’bout ‘dat. When a legend like that, when a OG says something like that, I’m 100% sure you know he meant what he said. For sure he had a bit of liquor, for sure there was words, maybe I don’t know. I don’t know him personally so I can’t really say it, but I think he meant whatever he said and the vibe he had, the way he felt the song, it was something else. Yeah, I do believe he means it. I dunno about Interscope and Def Jam but he showed me ’nuff love and he just made me get the whole Montreal on lock, one time, so that’s already a big props to him. If nothing happens after this, I still got ’nuff love for him and I still have respect for him. Because when an OG brings you on stage like that and makes you play a song five/six times you can’t even complain.”

KGoon told us he’s been in touch with N.O.R.E.’s people since the show and hopes to keep things going in a positive direction.

The buzz comes at a time when the city could use more fresh MCs to go along with the current wave of high-quality local production work, says Montreal artist/manager Dirtwork, who helped put on the N.O.R.E. show.

“Right now the Montreal scene is getting a lot of looks based on our DJs & Producers (Kaytranada, Lunice, Tommy Kruise, High Klassified and lots more), he told HipHopDX. “As far as dope new and fresh artists are concerned, our scene is lacking. We have The Posterz, CJ Flemings, The Frap Boyz and now KGoon is making a name for himself.”

Dirtwork got put onto KGoon by Montreality founder Sina, and after hearing his music, he gave him a shot as the opener for the show. N.O.R.E asked Dirtwork who he should put on from Montreal, and he suggested he give KGoon a moment based on how much support he had at the show.

“He fits into the scene by standing out, if that makes any sense,” Dirtwork said of the local rapper. “His music represents what most youngins in the hood go through and wanna make it out of. ‘100 Bandz’ will become the city’s anthem this summer. That’s my prediction.”

Check out the video for the song below.