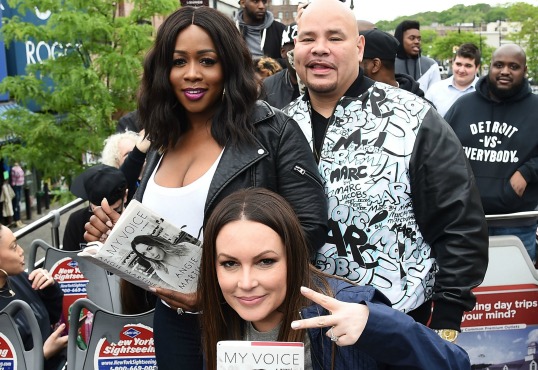 After years of being the most prominent voice in New York City radio, Angie Martinez is taking her craft to the written word – and just like one of the prominent MCs she used to cover, she’s got a story to tell.

On Tuesday morning, Martinez hosted HipHopDX and other media members on a double decker bus ride around New York City to talk about her new book The Power of a Voice and share memories from the 90s. The ride began in Manhattan at Bryant Park, continuing to stops at Flatiron (home of Hot 97), the East Village and Washington Heights, where Fat Joe and Remy Ma hopped on the bus to congratulate Martinez for the book’s release.

The book is designed to recount Martinez’s life and document the history of New York City radio and Hip Hop. As one of the industry’s best interviewers, she still seems more comfortable listening (she deferred to a tour guide for much of the ride), but the two stories – Martinez’s memoir, and East Coast Hip Hop’s story – are inseparable. She began her tutelage under Funkmaster Flex as a teenager, and worked her way up through the airwaves to become the most important voice at Hot 97. After staying at the station for decades, she left last year for Power 105.1, which also hosts The Breakfast Club with DJ Envy, Charlamagne Tha God and Angela Yee.

The bus ride began at Bryant Park, where she saw late rap icon Tupac Shakur shortly after a contentious interview, and days before he was killed in Las Vegas. She also pointed out the location of the old Palladium concert hall/nightclub, where she had her first big event after building her success on the air. She mentioned another park where she tried crack for the first time, during the period when the drug began to infest the city. She remembers being afraid that no one would come, but lines were wrapped around the block for the party, prompting helicopter surveillance. The Notorious B.I.G., Jay Z, Boot Camp Clik, and Wu-Tang Clan were all in the building to perform or offer their congrats.

But new fans can’t go to Palladium to see the history; the building now houses college dorms. Venues like that and The Tunnel, where Funkmaster Flex and Mister Cee used to spin, aren’t around anymore either. She spoke about how, during their beef, Nas was prohibited from lynching an effigy of Jay Z at Hot 97’s Summer Jam. Nas accused Hot 97 of censoring him and he furiously went to Power 105.1, where he gave an infamous rant on the air about it.

“I talk about how important that moment was. It set the tone, and gave Power some credibility,” she tells DX. “Before that, there was no history because they were the new station in town. That moment when Nas came in, that gave them a Hip Hop credibility that changed the radio dynamic in New York.”

Such classic rap moments weren’t covered as meticulously back then as they are now, in an era of social media and smartphones. Martinez has always chronicled the culture as a radio host, and she wanted My Voice: A Memoir to “fill the gap” for newbies who weren’t around.

“I feel like there’s a gap between people who have been to the Palladium, and people who haven’t been to the Palladium. I also feel like there are so many parts of the culture that haven’t been documented properly,” she said. “A lot of those early stories, you don’t even see pictures of. The fact that Jay Z and R. Kelly broke up at the Garden in front of everybody, and then we’re on the radio in the middle of the night. That should be Googleable, and it’s not.”

Martinez has been able to stay around for so long by being judicious about what she shared on the air, and building relationships that made artists respect her. She admitted that she has been tempted to venture into shock jock territory, but that sticking to her guns has proven most effective over her decades-long career.

“Sometimes, I’ve been tempted in a moment to handle something a certain way. But every time I’ve done that, it never works out for me,” she said. “…Sometimes when you stick to your own shit, that means you might take the L sometimes. But I’m OK with taking the L and having some integrity about my shit. I’d rather take the L, and in the scope of two years, be able to stand with some integrity, then have two amazing wins and have to live with the discomfort of that.”