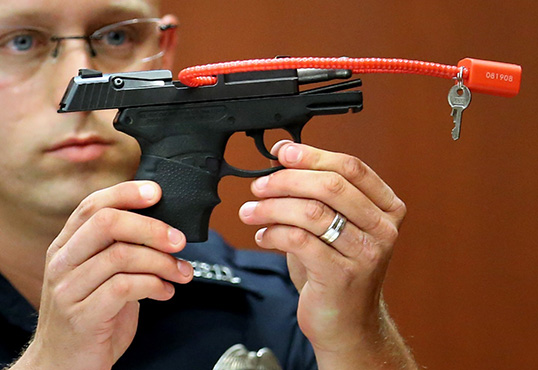 George Zimmerman Tries To Auction Gun That Killed Trayvon Martin, Gets Shut Down

George Zimmerman is looking to make some cash by selling the gun he used to kill unarmed black teenager Trayvon Martin in 2012.

The pistol was recently posted to auction site GunBroker.com with a description that called it “a piece of American History” and a “firearm icon.”

The minimum bid started at $5,000, and the auction was scheduled to begin at 8:00 a.m. PST. The post is no longer available, with the page now leading to an error message that reads: “Sorry, but the item you have requested is no longer in the system.”

HipHopDX contacted GunBroker.com’s press office for details on where the post went but didn’t hear back. Their Twitter feed is currently set to private.

The post also said that some of the proceeds from the sale would go towards fighting “BLM [Black Lives Matter] violence against Law Enforcement officers” and to “ensure the demise of Angela Correy’s persecution career and Hillary Clinton’s anti-firearm rhetoric.”

Angela Correy led the prosecution in the case against former neighborhood watchman Zimmerman, who claimed self-defense in Martin’s death and was acquitted of all charges. The shooting and the verdict set off protests across the U.S. and galvanized national debates about race relations, including many contributions from the Hip Hop community.

Zimmerman spoke with WOFL about why he wanted to sell the gun. “I thought it’s time to move past the firearm,” he said. “And if I sell it and it sells, I move past it. Otherwise, it’s going in a safe for my grandkids and never to be used or seen again.”

Trayvon Martin’s father issued a statement through the family’s attorney on Twitter, which said that the Trayvon Martin Foundation has “no comment on the actions of that person that murdered Trayvon.”

Statement of Tracy Martin, the Father of Trayvon Martin. pic.twitter.com/ZsBMpqSTLn