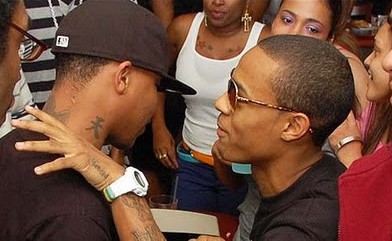 Bow Wow added to his beef with Yung Berg when he posted a video to Instagram Saturday (April 2) of Yung Berg getting punched.

“Got slapped by a surf boarder and aint DO NOTHING!!!!” Bow Wow writes in the caption of the video. “You been softer than mdeicated cotton from jump TURD [toilet emoji. Six laughing emojis.] (this too easy ima chill yall i promise [laughing emoji]) getting ran off the block.”

Bow Wow does not mention when the video was recorded.

Bow Wow calls out Yung Berg on Instagram over a comment he made regarding his rekindled relationship with his on-again, off-again girlfriend Joie Chavis and his lack of music releases.

Bow Wow, born Shad Moss, posted a picture praising Chavis and one of his Instagram followers told the father of 4-year old Shai Moss, whom he shares with Chavis, that he’s happy they’re making it work for their daughters sake, as reported by XXL.

“Naw this because I love her,” the CSI: Cyber actor captioned. “And my daughter. No man bout to be around my daughter so I gotta tighten up. I almost fucked it off being immature but you gotta man up.”

“Stop playing with us little boy,” Bow Wow commented under The Shade Room’s Instagram picture of Yung Berg’s comment. “You saw what happened in Vegas when we hopped out on you. Trick I guess he aint learn from Detroit. Maino slapped the life out you, now watch when the fruitz get you.”

Yung Berg and Bow Wow‘s beef dates back 10 years and stems from Berg feeling snubbed after the Underrated rapper declined to return a feature.

Bow Wow and Yung Berg’s Instagram exchange is as follows:

Oop! #Bowwow stepped into The Shade Room to come for #YungBerg! #ClapBackSeason