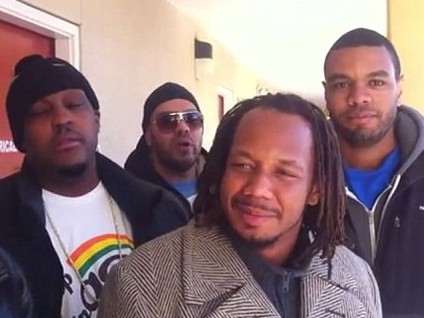 Marques Johnson, former Wu-Tang Clan-affiliated rapper known as Andre Roxx, has named TMZ in a defamation lawsuit for an article the gossip rag published in April 2014, according to The Hollywood Reporter.

Andre Roxx was made a Killa Beez member by Killah Priest in 2012.

TMZ initially named Johnson as the Wu-Tang affiliate who cut off his own penis before jumping off the balcony of an apartment building. The story was later corrected and named Killa Beez member Andre Johnson, who goes by the stage name Christ Bearer, as the person who attempted the suicide act.

Andre Roxx was in jail when the news surfaced and he was harassed by inmates because of the news, forcing him to go into protective custody.

Since Roxx‘s release from prison June 2015 he has found difficulty in re-establishing his music career.

The story was apparently picked up by a multitude of national and international media outlets including BET.com, USA Today, Extra, Radio One, the New York Daily News, Urban Daily, Daily Mail and Barstool Sports which all named Andre Roxx as the rapper who cut off his penis before attempting suicide.

The parent companies of the media outlets falsely naming Roxx, iHeartMedia, Warner Bros., Viacom and Gannett are co-defendants in the case.

“Even after TMZ posted a corrected story, and after other media outlets had made some effort to correct their stories, Defendants continued to report the same false information — that Plaintiff had cut off his penis and jumped off a balcony, and to this day no Defendant other than TMZ has even corrected the story,” the complaint says as reported by The Hollywood Reporter.

“Other than their affiliation with the Killa Beez and the Wu-Tang Clan and the fact that they are both African American male musicians, there are and were key differences between Plaintiff and Christ Bearer, Their names, though containing the overlapping (and common) names ‘Andre’ and ‘Johnson,’ are not the same,” continues the complaint. “Christ Bearer’s given name is Andre Johnson; Plaintiff’s is Marques Johnson. The two did not bear a physical resemblance at the time of the incident: Christ Bearer is at least ten years older than Plaintiff, and Plaintiff’s appearance is distinct due to his green eye color, which is unusual in African American men.”

While Christ Bearer admits he’s proud of severing his penis off, there are still news articles circulating online that Andre Roxx was the Wu-Tang affiliate who attempted to take his own life.