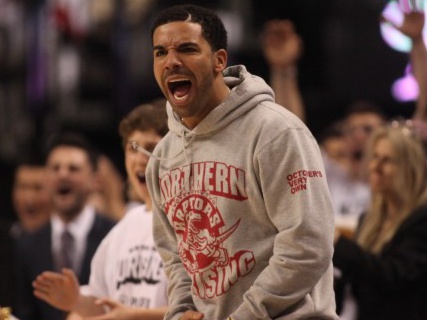 As with most Toronto Raptors games, singer/rapper Drake was present on the sidelines rooting for his home-team at last night’s (March 14) game. And at a key point in the game, with less than 30 seconds left in the fourth quarter, the musician put his heckling skills to good use.

In a video clip from the game, which has quickly gone viral, Drake can be seen speaking to the Chicago Bulls’ Justin Holiday as the player attempts to find someone to pass the ball too.

Holiday was soon hit with a five-second violation, and the ball was handed back to the Raptors.

Whether or not Holiday was truly distracted by Drake remains unknown. Despite the temporary win, the Raptors ultimately lost the game by only two points. The final score was 109 – 107.

Drake currently serves as the official team ambassador for the Raptors, and was given that title nearly three years ago.

Video of Drake distracting the Bulls’ Justin Holiday, can be found below.