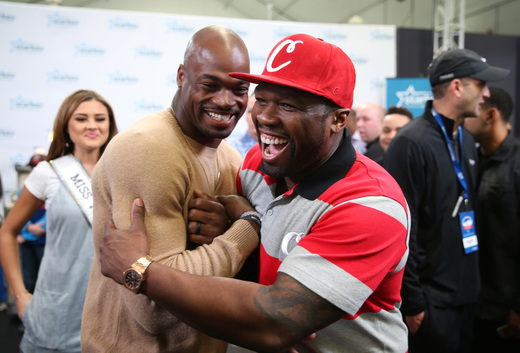 Amid the Super Bowl hoopla over the past weekend, the Starkey Hearing Foundation generated some serious celebrity philanthropy to change a select group of children’s lives forever.

50 Cent led the charge on Saturday, February 6 for the 2016 Starkey Hearing Foundation Super Bowl Hearing Mission where he and several other famous faces gifted children with state-of-the-art hearing aids.

The Starkey Foundation’s expert team of audiologists provided more than 70 San Francisco residents with their own custom digital hearing devices. Most of the children attend a local school for deaf and hard of hearing children.

“I think when you make it to a certain point in your career, you become conscious of giving back,” the G-Unit CEO said of his appearance at the event. “While I’m out here for the Super Bowl, I decided to stop by and use my time the right way.”

The adorable patient Isabella appeared to be shy yet thrilled nonetheless that the hulking rap star assisted her in road to experiencing life through sound.

Photos and video from the event can be seen below. For more information on Starkey Hearing and how to donate, visit their official website.