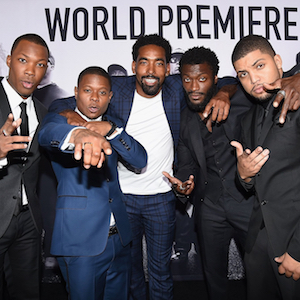 His film was nominated for Best Original Screenplay, but none of the actors or those who were calling the shots on set will receive the academy’s recognition. It’s just one of numerous movies featuring a majority black cast that was snubbed by the Oscars and thus prompting the #‎OscarsSoWhite hashtag going around on social media.

Taking to Facebook Packer ripped the Academy for it’s lack of cultural representation and said they can do better.

“To my Academy colleagues, WE HAVE TO DO BETTER [sic]. Period,” he wrote. “The reason the rest of the world looks at us like we have no clue is because in 2016 it’s a complete embarrassment to say that the heights of cinematic achievement have only been reached by white people. I repeat — it’s embarrassing.”

He also solidified his bond with those tweeting about #OscarsSoWhite. “To my #‎OscarsSoWhite folks who are angry at the absurd lack of diversity highlighted yet again by this year’s Oscar noms. Trust me, I get it,” he wrote.

Beast of No Nation’s Idris Elba, Creed‘s Michael B. Jordan, Concussion‘s Will Smith and Star Wars‘ John Boyega all did not receive nominations from the Oscars, aside from those in Straight Outta Compton.