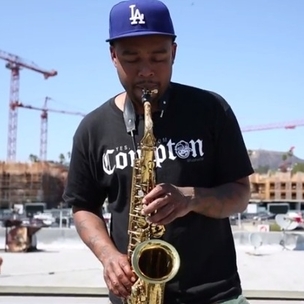 "To Pimp A Butterfly" Is "More Than Pro-Black," According to Terrace Martin

Kendrick Lamar recently finished his “Kunta Groove Sessions” tour where he played cuts from To Pimp a Butterfly for small venues.

Lamar‘s producer and saxophonist, Terrace Martin, explains why the Compton, California rapper will probably not perform songs from that album in another setting.

Martin also details how the album’s meaning has morphed to reach a broader scope than initially imagined. He says that seeing people from different races and backgrounds helped this evolution to happen.

“Kendrick’s album is definitely from the heart, mind, and soul of a young Black male speaking to his people,” Martin says. “But also, more than pro-Black, I believe this album has become pro-human being, pro-everybody. Playing this music for a mixed crowd is simple because we don’t look at it as a mixed crowd. We look at it as our relatives within the art community, where we don’t experience Black and White or none of that bullshit that the police and the government got us going through as Black people. Within the art is a place of safety. A place of love, man.”

He continues by saying that Lamar and his team embrace White support of their mission. Nonetheless, the producer maintains his original purpose for the album.

“To Pimp a Butterfly is beauty within the problems of our culture and our people,” Martin says. “It’s a wake-up call. It’s an audiobook to help get the message out to others, including some allies that can help us. We have allies that understand struggle, but sometimes they don’t know we going through this shit. But I will say it again: To Pimp a Butterfly is a Black album.”