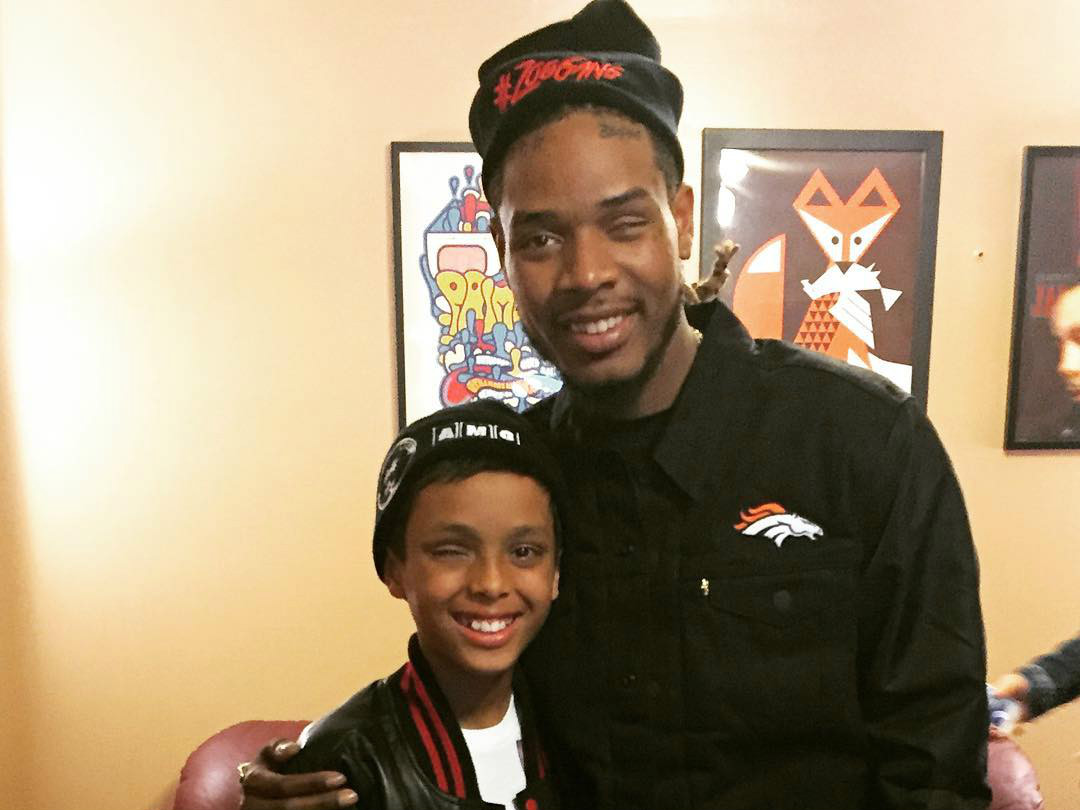 Fetty Wap met with the child that was inspired by him at a concert last week at the Fillmore Auditorium in Denver. Jayden Burgos was born with retinoblastoma, which is a form of eye cancer and when he saw Fetty Wap without his eye, and was inspired to go to school without a prosthetic eye.

Burgos, now 11-years-old, lost his eye before his first birthday, according to Daily Mail and Fetty Wap lost his eye as a child to glaucoma.

Burgos’ mother, Brenda Vaden, shared the experience on Instagram of when her son met Fetty Wap.

“Can’t believe this happened,” she writes in the caption of an image of her son with Fetty Wap. “@fettywap1738 treated Jayden like a little brother, so cool. I cried. Like hysterically lol. Ha. Oh well, best night ever ?#jaydenmeetsfetty #zoogang@rgfproductions @nittdagritt”

Fetty Wap met with Burgos and his family backstage after the show and gave the fan an autographed poster. He also gave him some life advice.

The two first connected when Burgos’ mother, Brenda Vaden, reached out to the Paterson, New Jersey native on the social media website to thank him for inspiring her son. Fetty Wap responded with gratitude for them supporting him.

Today was unforgettable, can't even express the gratitude I have towards @fettywap1738 and the rest of his crew for making it the best night for my Jay. I have to share the best two moments for me tonight…Hearing Fetty telling Jayden to "stay different, stay living, enjoy life" and Jayden telling us when he first saw Fetty coming up the stairs his "nervousness got released" he was so happy to see Fetty he just got up and hugged him. Thanks to all that made tonight happen. My heart is full for my baby boy. #jaydenmeetsfetty #fettywaprocks #oneeyeandawesome #zoogang #jayden #thismamaisonehappymama @fettywap1738

This piece of art is straight off Fetty's tour bus. He went back outside to grab it after meeting Jayden. Signed by all of them. One of a kind ??#jaydenmeetsfetty #thathappened #jayden #fettywap #oneeyeandawesome #zoogang @fettywap1738

Don't mind us, we'll be in the VIP section and/or on stage…#jaydenmeetsfetty #imfloodingyourfeedtonight #sorrynotsorry

(This article was first published on September 15, 2015 and is as follows.)

The boy’s mother, Brenda Vaden, took to Instagram to thank the New Jersey rapper and share her story.

“This young rapper unknowingly gave Jayden something we weren’t able to give him-the confidence to be different- and I am grateful to him,” she writes. “Thanks to Fetty Wap for saying F the world this is me, and for helping make our baby boy just a little more remarkable than he already is. And we’ll be purchasing his album, a small thank you to him for changing Jayden’s life forever.”

(Warning: long sentimental post ahead) Today I am forever thankful to a young man named Willie Maxwell aka Fetty Wap. While his music is catchy (not always agree with his lyrics but hey who am I to judge…), I'm not necessarily his fan (although Trap Queen is my jam), BUT today I'm his biggest fan. Many close friends, and of course our family know that Jayden was diagnosed with Retinoblastoma at the age of 1. In result of that he had his right eye removed 2 weeks after his 1st bday. He's worn a prosthetic eye since then. He has always been terrified of taking it out and would not be caught without it…and then comes along Fetty Wap… Similar to Jayden he lost an eye at a young age and along the way he decided that he didn't want to wear his prosthetic eye anymore, so he stopped. Jayden, let it be known, is a Fetty Wap fan, a real fan, not like me ha! Well, today, after weeks of asking, Jayden is venturing the world without his prosthetic. I of course am a wreck because this world can be cruel, but so proud of our Boogies. This young rapper unknowingly gave Jayden something we weren't able to give him-the confidence to be different- and I am grateful to him. Thanks to Fetty Wap for saying F the world this is me, and for helping make our baby boy just a little more remarkable than he already is. And we'll be purchasing his album, a small thank you to him for changing Jayden's life forever. #oneeyeandawesome #jaydenismyhero #thankyoufettywap @fettywap1738

Leave it to my social media queen sister to get @fettywap1738 to see Jayden's picture and story AND to respond! Jayden has been on cloud 9⃣! #thankyoufettywap for taking the time out of your busy day to leave a note for Jayden, you are AWESOME. And so are the rest of you that left sweet comments and shared Jay's story ??? #fettyrocks #oneeyeandawesome #jaydenismyhero #isthisreallyhappening @omgitsmokito @fettywap1738 @nittdagritt @jlvaden @1ofakind07