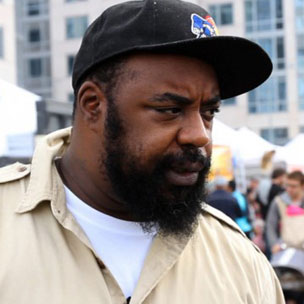 Duck Down Music’s crowdfunding campaign to support Sean Price’s wife and children in the wake of his death has eclipsed its goal.

(The original story in this thread was published August 10, 2015. It is as follows.)

Graffiti artist Meres One has painted a mural in honor of Sean Price, according to gothamist.

The rapper reportedly died in his sleep Saturday (August 8). He was 43.

Meres One created the portrait at 5 Pointz, where he was curator.

“All of his label would come to 5 Pointz,” Meres One says of Sean Price, a Brooklyn, New York rapper who recorded for Duck Down Music. “I had this wall for a year and I wanted to do a portrait. I just didn’t know who. It just was a perfect fit, one of the illest out of Brooklyn.”

Located at Bergen Street and Kingston Avenue in Brooklyn, the mural is about 20 feet by 15 feet.

Sean Price is survived by his wife and three children.

Duck Down Music has organized a crowdfunding page to help assist Price’s wife and children.

As a member of Heltah Skeltah with Rock, Sean Price helped usher in a wave of independent New York rap in the 1990s as part of the larger Boot Camp Clik collective of artists, which also included Black Moon, Smif-N-Wessun and O.G.C.

In addition to being a respected artist, Sean Price interviewed a number of rap figures, including Mac Miller, Harry Fraud and Scarface. He also served as HipHopDX’s guest editor in October 2012.

Photos of the Sean Price mural are are follows.