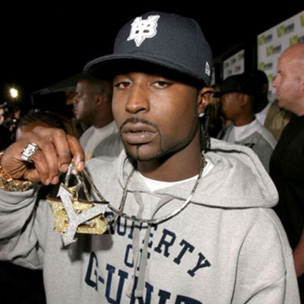 Young Buck’s recently released 10 Bullets mixtape is the first in his series of 10 tapes he plans to drop this year.

“I guess the whole title of the record came about through me.,” Young Buck says in an interview with XXL. ”I felt like I wanted to do something different with the game, make it exciting a little bit. You know, it’s kinda boring to me. There’s a lot of good music ,but there’s not a lot of consistency. It’s kinda here and there. I know I’m one of the most consistent artists in rap. I fight for that and I feel like I deserve that. I might not be your favorite, but I’m damn sure consistent. So I wanted to do something that showed my work ethic and consistency and then to give myself a challenge at the same time. And that’s when I came up with the Ten-A-Key mixtape series, 10 mixtapes in 10 months with 10 different songs. And the 10 Bullets was just basically the kickoff for the mixtape series.”

Buck says the next installment is underway.

“I will say that the next one I’m working on, it’s crazy, man,” Young Buck says. “I won’t give you the title—I do got the title ready and I do got four out of 10 songs for the next one that I know I’m going with—so I’m getting ready. I’m gearing up to shoot the video for the single off the mixtape, gonna be ‘Let Me See It’, and that’s produced by Drumma Boy. So we gonna go with it the right way and push that product as much [as we can] and get ready for the next one coming next month. So that’s where I’m at with it, man.”

Young Buck says that his diverse flows and penchant for honest, self-reflection is much needed in today’s Hip Hop environment.

“I think that’s the void in Hip Hop, is that music doesn’t really have a lot of the Bucks, meaning the individuals that give you the reality, the mixture of it all,” Young Buck says. “I’m one who can get on a record and tell you, ‘I’m gonna bust ya fuckin’ head’ and mean it. Then I can get on another record and tell ya girl, ‘I fuck her like I love her,’ and then I can get on another record and say, ‘Lord, forgive me,’ you know? It’s all real, though. And the fact that I’m really from it and really out here in it—I’m in the middle of the cut as we speak getting my car washed talking to you, homie—I’m washing the police hit the corner right now. So what I’m saying is, I’m different as a person than your average artist, and it reflects over to my music. My music is a reflection of the environment that I’m from and I’m actually still in.”

After the recent G-Unit reunion, which has spawned two EPs, Young Buck says the group’s chemistry is stronger than ever.

“The bond that we have is the strongest bond that I’ve ever had in my life with my brothers,” Young Buck says. “We’re closer than we’ve ever been. You know… Let me tell you something, man. When you have success the way we have had success and so quickly of how G-Unit got where we at, somewhere down the line in the middle of that, somewhere you become unhumble. There’s no way you can remain humble all of the fuckin’ time, so somewhere we all became unhumble, including 50 Cent. And I think what happened with our separation was that God made us realize that and he humbled us all. And when he put us back together, man, we so excited for what’s to come, we know what to do from where things is at in the game. We’ve been and done a lot of different things. But most of all, we grew and matured a lot in a lot of different areas, not only as us as artists but as a team. What people don’t realize is that an artist is only as strong as the team, the people that you don’t see behind the cameras. I tell 50 this all the time; our team is special because even over the seven or eight years that I was away from 50—you know, we never had a conversation or nothin’—but when I came back around not only did I realize the growth of us as men and as brothers, but some of the same individuals that was there to help make my career from the beginning with G-Unit are still there. And they’ve grown into better men, better businessmen as well.”