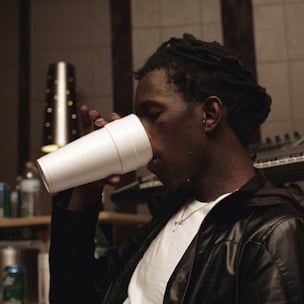 In addition to switching the title, Thugga took to Instagram to announce that his first show, following the album’s release, will be in Hollygrove, Louisiana.

Yes, Thug is referring to the same Hollygrove neighborhood in New Orleans, Lil Wayne and Mack Maine grew up in.

“YSL Carter 6 coming out Friday. First show, New Orleans, Hollygrove fuck nigga, meet me there, better yet beat me there,” Thug says in a new Instagram video, as two men stand behind him waving firearms.

The “New Atlanta” rapper has been using his Instagram account to fuel his feud with Lil Wayne. After Wayne urged fans to “stop listening to songs of niggas who pose naked on their motherfucking album covers,” Thug responded by saying, “I understand that Lil Wayne is frustrated about his career and I feel him on that, but this is my idol. I would never in my life swap words with him or beef with him about nothing. This is a person that I look up to. Ha Ha.”

Just a few days later, Thug uploaded a video to Instagram that features various clips of him performing while a woman narrates what seems to be shots at Wayne and his imprint.

“Big killa, young nigga, young fucking money…fuck you I kill you,” she says.

Wayne has yet to respond to Thug’s latest comments.

Check out the social media spat below:

I respect @liltunechi for being someone so big in my life, no matter what he say .. #c6otw VIDEO BY: @yslapparel