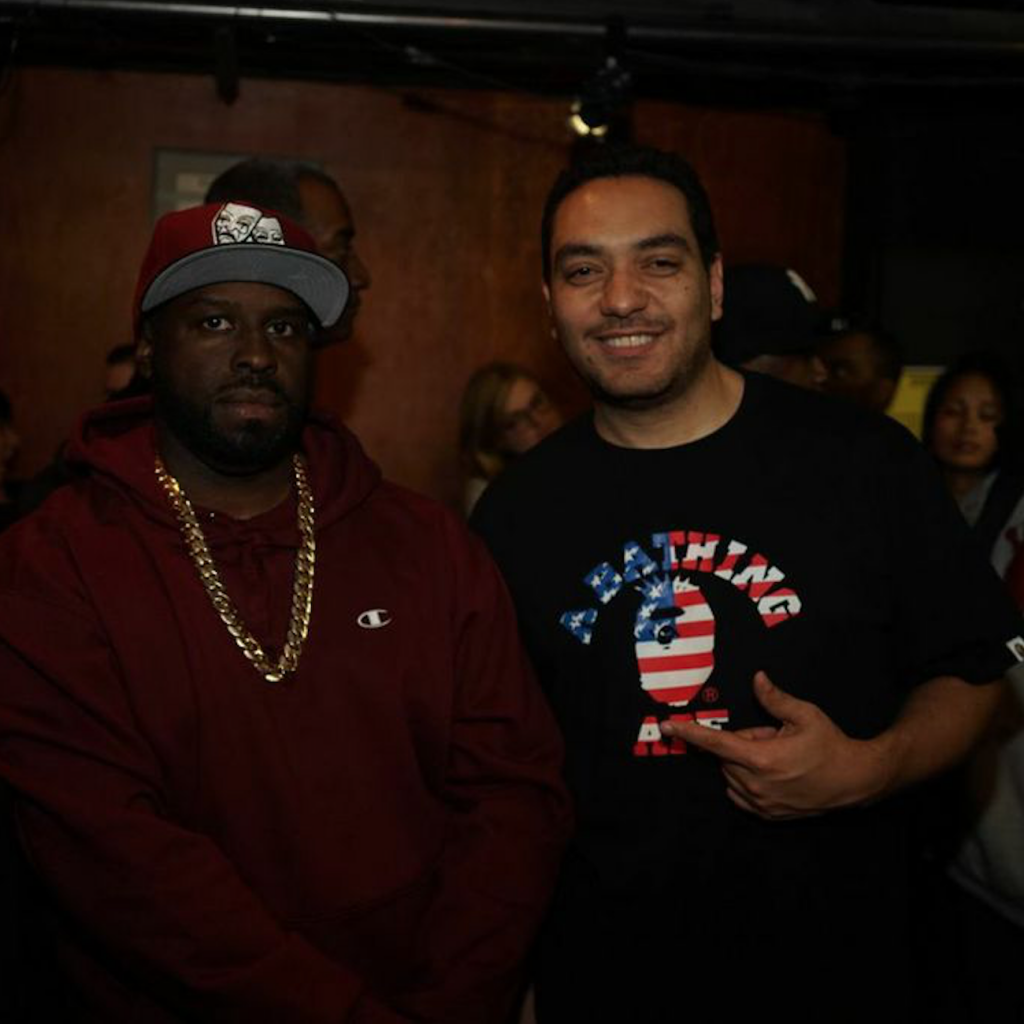 In late January, Ciph parted ways with WQHT Hot 97, after holding down the airwaves at the station “Where Hip Hop Lives” for close to two decades. He helped steer the station’s morning show for years, alongside Peter Rosenberg and K. Fox, and was later asked to fill-in for Angie Martinez when she jumped ship for rival Power 105.1. Ciph’s situation at the company had soured and, although he wasn’t a part of the brand’s new direction, several of his friendships remained intact.

After a few unsuccessful attempts at inviting Flex to his improv comedy show “Take It Personal”  in Lower Manhattan, the Hip Hop luminary finally agreed to attend and participate.

Tuesday (April 6) night’s event marked the two-year anniversary for the Hip Hop-infused comedy series that Ciph has channeled his efforts into since leaving Hot 97.

The inside of the Upright Citizens Brigade (UCB) theater in Chelsea, New York was packed and some attendees had to stand in the back or sit with their legs crossed on the edge of the stage.

After Ciph introduced his new coworkers, an improv team named “A Tribe Called Yes,” he invited the night’s first special guest, Funkmaster Flex, to the stage.

“I was at Hot 97 for 17 years and when I left the station you didn’t give a shit,” Ciph says jokingly to Flex. “This is what I’ve been doing on my off time. I’m going full time with it.”

After some brief banter, Flex eventually tells the crowd two stories, one detailing how he stole his name from a group called Funkmaster Flex and the Imperial 3 and the other about a studio session with The Notorious B.I.G.

Ciph and A Tribe Called Yes reenact Flex’s stories using comedic improv methods, while Flex looks on from the corner of the stage.

At times, Flex cracks a smile. He giggles once or twice, but mostly peers at his cell phone and sometimes at Ciph.

After the show, Flex took photos with Ciph and the second guest of the evening, Joey Bada$$.

Then, he told HipHopDX that he’s “absolutely” proud of his mentee.

“He loves this too, and it’s something he does naturally,” Flex said. “This is naturally him, so I think it’s dope.”

As for “not giving a shit” when Ciph left Hot 97, Flex laughs at that claim. “You know what?” Flex says. “I always understand. I think that for him, what’s best is he’s doing something he’s enjoying, not necessarily what people want him to do. So, I think that’s hot.”

Ciph can’t believe the show has reached the two-year milestone. Backstage, he’s filled with energy after his performance and grinning from ear-to-ear.

“I didn’t know it would last this long,” he says to HipHopDX. “To be at it for two years on a weekend, at the UCB theater, I think it’s crazy as hell.

“Doing the show made me realize that I definitely want to take comedy more seriously, but honestly this show is just fun,” he continues. “I look forward to it every Friday. I was nervous that since I’m not on the radio no more, people were going to think I don’t have leverage. I still got some of the greatest guests and they know I left the radio. That was like Joey Bada$$’ second time, and he just loves it, you know?”

Ciph’s adoration for Flex is apparent. Since he’s signed to Roc Nation and is developing a TV show based on the improv series, Ciph doesn’t really mind that his mentor “never really got his comedy shit.”

“He’s only been to one or two of my stand up shows,” Ciph says. “I’ve been around [him] for 17 years, to the point I do my own thing but if he really needed me to get him a sandwich like I used to do, I’ll go get him a sandwich.”

Peter Rosenberg also came to the event to show support. The two worked as tag-team partners on Hot 97’s morning show and produce the Juan Epstein podcast weekly via iTunes.

“It’s real cool,” Rosenberg says of his longtime friend. “I’m super proud of him and very excited for him. He pursued it and made it a thing, and its continued to grow-and-grow. This is authentically Hip Hop and it’s authentically improv.”

When asked who’s the funnier of the two, Rosenberg replies, “Me, obviously!”