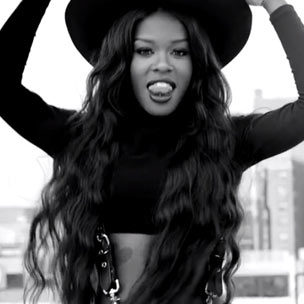 Azealia Banks is set to cover the April 2015 edition of Playboy magazine, according to Playboy.com.

“Azealia Banks will appear on the cover of Playboy and in a nude pictorial,” an article on Playboy says. “The badass rapper from Harlem poses, according to editors, in a ‘frisky pictorial that’s sure to break the Internet’ In addition to the photo spread, Rob Tannebaum talks to Banks in a no-holds-barred interview.”

The 23-year-old rapper shared a photo from the spread via Instagram.

Banks joins a long list of women who have graced the pages of Playboy.

Banks’ album, Broke With Expensive Taste, debuted online in November. The physical copy will be available on March 3.

“Banks can be called a lot of things, one thing that she can’t be labeled is predictable,” HipHopDX said in its review of the collection. “That mantra is delivered in spades in BWET. There’s a deep level of spindled focus past the surface sounding schizophrenia. In a time where every emerging rap or pop wanna-be yearns for Mike Will Made It and DJ Mustard productions, Banks defiantly gives trends the middle finger like everyone else she’s beefed with in her hyper political early industry history. BWET is a chaotic album from an equally chaotic specimen. And for everything it does well, it also suffers from it’s anthology like etymology.”

Guess who's on the cover of @Playboy?! It will be on stands March 20th!!